I just got the cutest bunny ever... Santa Photos post 12!

I got the cutest bunny ever a couple weeks ago. He’s a 4.5 month old English Lop. His ears are longer than my Bloodhound’s ears (we measured).

Anyway, my question is that I’m concerned about his hay intake. I know hay should make up the majority of his diet, but he hardly touches it. A few strands here and there. I have timothy in one feeder and orchard grass in another feeder. Will this intake increase with age or do I need to consult a vet for this? He is going to get spayed in a week so I plan to ask them if it hasn’t improved, but I can take him in before then if needed. It’s been 13 years since I last had a rabbit, and I’ve never had a baby one before so I don’t know if the low hay interest is normal. He came from a bad breeder - I tried to do my research and she sounded reputable and has success at shows, but then I saw the conditions of her rabbitry and the care guidance she provided (she advised to feed 3 cups of pellets each day, which is significantly more than any research I’ve done shows, and also advised to feed an alfalfa based pellet which goes against most research especially once he is an adult). 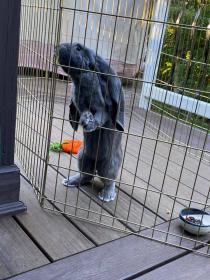 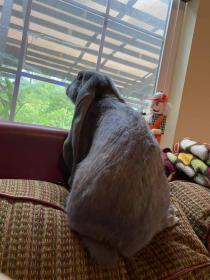 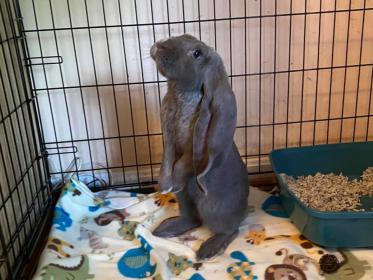 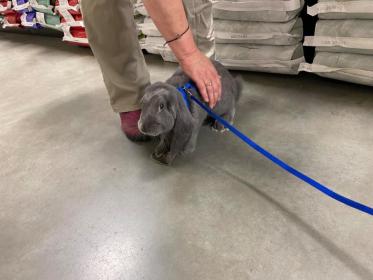 Maybe he just misses his pellets and isn’t used to much hay. Hope he starts eating it better soon.

Did I mention he’s adorable?? Lol

I don’t have much experience with rabbits but their diet is pretty similar to Guinea Pigs.

Hay is really important for teeth and gut health. Are you feeding super high quality or using (nice) horse hay? It might be worth buying a large bag of Oxbow orchard grass until he gets the idea. They won’t typically eat anything brown or stemmy so you’ll always have to use the best quality hay but once they get used to eating it, they’ll at least pick through for the good parts.

Quickly looked up pellet requirements and they do appear to be the same as GPs. Alfalfa for the first year but pellets are a very small part of the diet. Like, no more than 1/4 cup per day with a good rotation of vegetables for vitamins. Be sure to check (and double check!) what is safe for him but when I had GPs that came from a pellet only diet, they didn’t know what to do with food that was bigger than their mouths. I started with Romain leaves, baby carrots and cilantro sprigs, one at a time until they developed a taste. Remove the pellets during the day, only offer hay and veggies, pellets go back at night.

Good rescues usually have care sheets on their websites and some would be happy to talk to you. He’s cute and appears to be very curious!

His spine seems to show in the second picture. I’d offer him other food per the post above now until you get to the vet for spaying in two weeks and then ask the vet for guidance.
If he weren’t going to be spayed, then I’d take him to the vet for a wellness check up.

Hay and pellets are the basics, he needs lots of fresh vegetables, he will let you know which ones he prefers but try them all. In the summer I would either cut some clover and put it in my bunnies cages or I would build a pen that I could put them in and move around to different areas so they could graze.

Thanks guys. He still doesn’t eat much hay. I feed really gorgeous Oxbow hay (timothy and orchard grass) - it kills me how much I spend on hay when I know I can buy a bale for $8-10 but the bagged Oxbow hay is nicer and more consistent quality. I cut back the veggies to every other day to see if that would increase hay consumption and it did for a little while, so I thought maybe he was just filling up on veggies and was no longer hungry for hay. But now it seems he’s lost interest in hay again and I’m concerned because I know how important it is for their teeth to have long-stem forage.

Pellets are supposed to be limited for most breeds of rabbits, but all of the English Lop breeders I’ve talked to said to offer 2+ cups of pellets a day. He’s a giant breed rabbit, currently weighs 10 lbs at 5.5 months old. The vet gave him a clean bill of health and his neuter went just fine. So it’s a mystery at this point. I’ll take him back in for another opinion if he doesn’t start eating more forage soon.

Hullo! I’ve found some bunnies are really picky about hay quality. The Oxbow and Kay-Tee brands won’t cut it for these fussbudget buns. Look up websites for Small Pet Select, American Pet, 101 Rabbits, and Binky Bunny. Many times you can order a small sample size of hay to see what they’ll like. I’ve been getting the 2nd cut Timothy hay from Small Pet Select, and a friend gets her bunny hay from American Pet. Good luck with your cute bunny

What a cutie! I’m glad this got bumped up because I missed him when you posted. I know absolutely nothing about rabbits, but he is ADORABLE. Someday I will have a big English Lop cause I love their ears. How is he doing and how huge is he now?

Turns out he didn’t like eating from his hay feeder for whatever reason. I now place the hay directly in the litterbox and he chows down like there’s no tomorrow.

He’s doing great, he’s transitioned to a full free-roam house bunny and attends Yappy Hour at our local pub in town every Wednesday with the dogs

Oh my! Someday I will have a free roaming house bunny.

That is so adorable! How long did it take you to harness train?

I would love for our house bunny to free roam, but our GSD is too excited about her presence. She has a playpen in a room to play in, under supervision. I’m just too nervous about plugs to trust her. Our neutered rabbits were easy in the house, but this female is a terror. She is as obnoxious as any creature we’ve ever had. She’s demanding, and LOUD, if we don’t attend to her often enough. She tries very hard to knock over her water cup, chew on the blanket in her playpen, and generally raise heck. I thought they thumped when spooked. Not this little terror. She thumps if she needs something. Repeatedly. Until you succumb to her whims. Our son adores her mostly because she’s obnoxious.

He’s only “harness trained” in that he tolerates the harness - he goes where he wants to. I don’t have him trained enough to follow me on the leash. It’s more of a safety precaution for when we are out at yappy hour or at the feed store or whatever, just in case he happens to feel frisky and jump out of the cart or something.

I have three dogs and was worried about two of them - one is a bloodhound and the other is a korean mutt that loves to chase birds and rabbits out in the yard. The bloodhound for sure requires a little extra supervision but he’s improved over the last few months and is more afraid of the rabbit than anything else. The korean dog and my great dane don’t care at all and ignore him.

I have all of my cords covered with vinyl tubing (like you would use for a fish tank filter) to prevent chewing and he doesn’t bother them. i do need to get some of those outlet covers just to be safe though. He enjoys digging so that would be problematic if I had real hardwood floors but mine are cheap ones. So far the only thing he really gets into is the toilet paper. He’s shredded more than one roll. He really is like a small dog. Jumps on the couch and will just chill and watch TV with me, enjoys his treats, has to have his naptime, etc.

Speaking of thumping, funny story, when I first moved into my new place he began thumping constantly at night… so I got a small night light that plugs into an outlet and problem solved! I guess he just didn’t want to be in pure darkness.

Here’s a photo from when he met Santa a couple weeks ago. 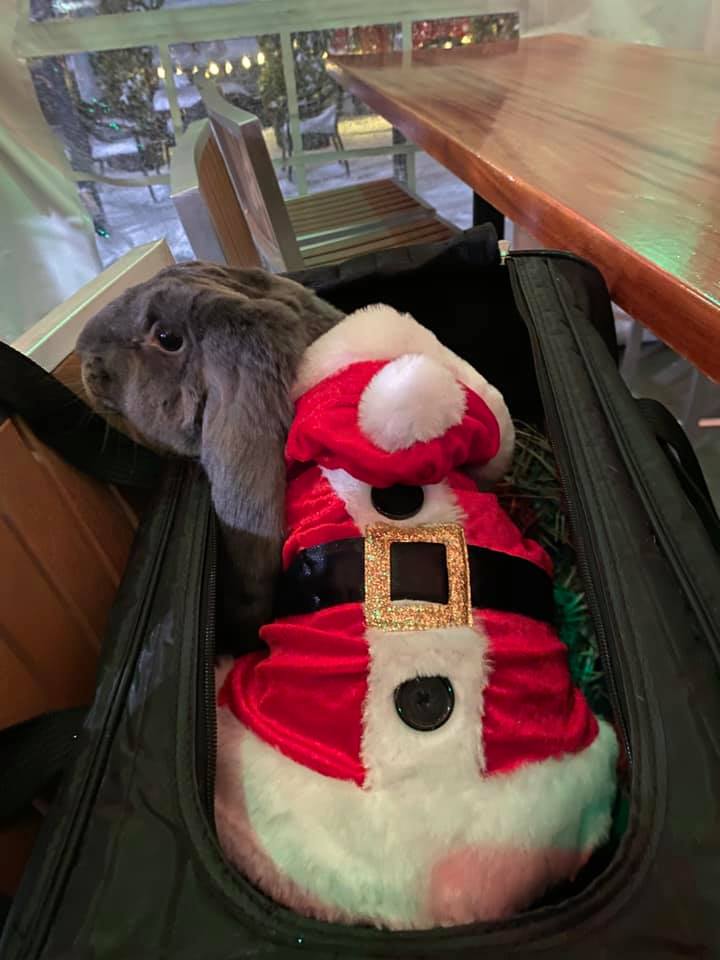 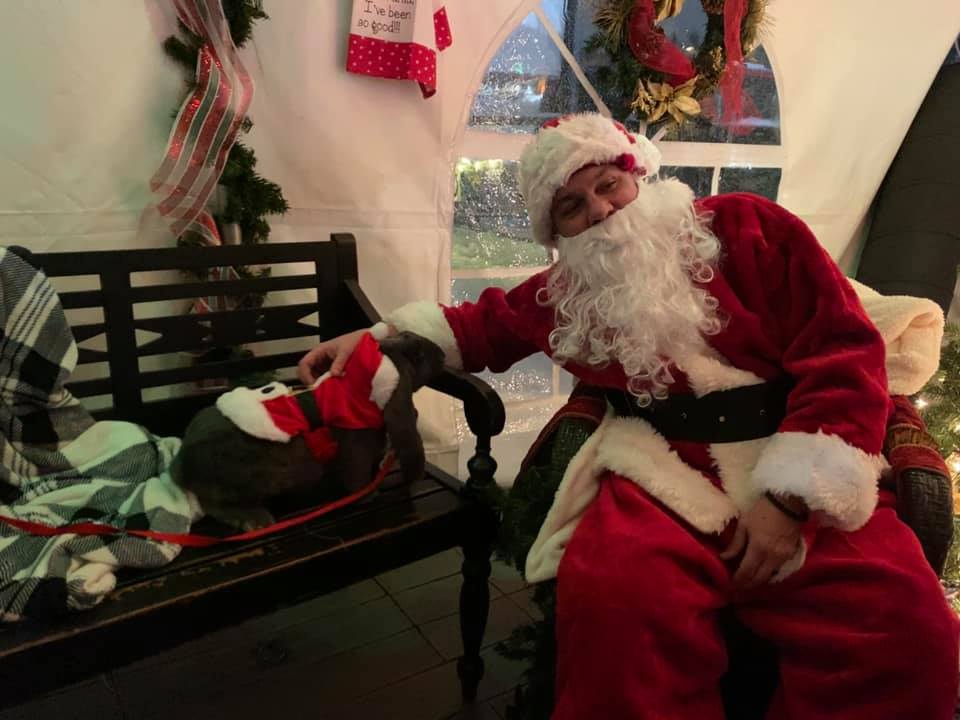 Oh, I love him in his Santa Paws costume. Adorable.