I think I broke my cat 😿

Some may remember my Problemchild Cheeto - feral adoptee who hid in my basement for 5yrs (yes, years).
He turned a corner last November & until last week was a big orange barnacle.
“Helped” me feed cats (just 2), make my bed & installed himself atop a corner of the couch, when he wasn’t cutting off the blood flow to my legs (12# of cat).
Then I went out of town. Just 2-1/2 days, Thursday morning to Saturday night.
A catlady friend took (too much) care of cats while I was gone.
She insisted on coming twice a day.
Cats disappear when anyone but me is in the house.
And I know she did her best to see them, babytalking & peeking under the daybed that is their hidey-hole.

I got home Saturday, both cats showed up. Friendliest - Bounce - was more vocal than usual

& Cheeto let me pet him & stayed with us on the couch.
He did not - as was his habit - come to bed with me. Never stays all night, but jumps up & stays for pets.
Sunday he was MIA & remains holed up under the daybed in “their” room.
Litter box is in use & food is eaten, but he has not left the sanctuary since.

With much trouble for my aging bod, I squeezed under there & was allowed to touch/pet him, but he is not wanting to emerge.
He had an episode in January of stress-related peeing outside the box. But nothing since & no sign of that now.
I plan on visiting daily

hoping he’ll venture out.
Any ideas to let him know things are back to (his) Normal? 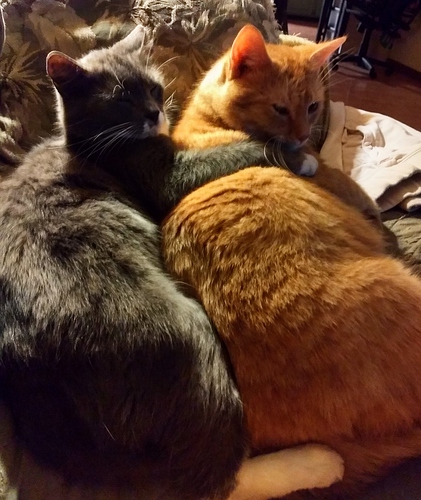 I’m sure he will come around on his own accord in a few days. He might feel like his kingdom was invaded and needs some time to decompress. Keep to the normal routine and he will grace you with his presence when he deems it worthwhile. If he very food motivated, maybe try some good old fashioned bribery?

Mine like to “punish” me when I go away for a few days or at least it feels that way. They usually hide from whoever is taking care of them while Im gone.
I bet yours will come around after a bit! Good luck!

Wait you went out of town ? without telling him ?

Probably not broken. Just temporarily out of service. I’ve had cats who gave me the cold shoulder after I left for a few days.

I have a semi-feral orangy that lives in our barn. He mostly lives in the unused upstairs, so I try to avoid going up there as much as possible, but this summer DH and I had to go up in the attic while he was out on an explore. It terrified him to see us invading his lair, and he bolted out of the barn. I didn’t see him for three days/nights, but on day four, he returned howling for food.

His stomach beat his fear, it just took a few days.

Now the little dude is starting to let me lift him up. I still can’t get near him if he is outside, but in the barn he is bossy and petable…but he still hates if we go upstairs.

He’ll come around. Give him a few days.

I was just talking last night with a friend who is in the hospital, and she’s worrying about her cat. She has neighbors going in to feed and scoop, and they haven’t seen a whisker. The food disappears, and the litter box is used, but no cat. It is a tortie. I assured my friend that her cat is probably doing fine, just on strike, and might continue on strike for a few days after she gets home, but most likely, things will again get to normal.

It is now nearly a week & stiil Cattus Non Mentis

I may commando-crawl under the daybed, or not - kills my aching knees to do so.

Sigh… Yes, @BUSY WTF was I thinking, giving no Written Notice of Intent?
I do talk to all my animals - cats, horses, chickens to let them know I’m going somewhere, but only Cheeto seems traumatized.

Bounce - the gray one - is still more vocal than usual, but at least he’s back to being visible & clingy

any update? Has Cheeto made an appearance?

How about delicious cat treats spread about–sprinkled with cat nip?(Sorry I realized drugs are not the answer…but it is amazing how they come out of themselves high on cat nip-but maybe cats can have bad trips on cat nip?)

Sorry!
Yes, Cheeto is back to as normal as he ever gets.
Took him just over a week

He made an appearance last Sunday night.
Joined me & Bounce on the couch.
Then…

I had an out-of-town guests, for 3 days.
Tuesday through Friday morning, no cats appeared in my house.
But Friday evening All was Forgiven.
We are back to our Usual:
Cats on the couch

And this morning, cats all over me in bed.
Peace Reigns.

By the way, my friend I mentioned upstream, who has been in the hospital and then rehab for weeks, came home tonight. Seven weeks she’s been away. Finally home tonight. In all that seven weeks, the people feeding and scooping have never seen the cat.

I asked her if the cat was glad to see her or was punishing her first. She said that she has at least seen the cat. The cat came coolly to the corner of the bed and looked at her, and she greeted the cat and apologized. The cat then turned around and vanished again. Yep, she’ll probably be on strike for a bit at first, just to thoroughly express her opinion of seven-week absences. Whether my friend was in the hospital or on vacation is irrelevant from the cat’s POV. She simply shouldn’t have done it. So there.

Then, Faux Grandson came by the other night to do a load of laundry.
While he dozed on the loveseat, both cats inspected him.
Each stood by his head, as if they might jump up there with him 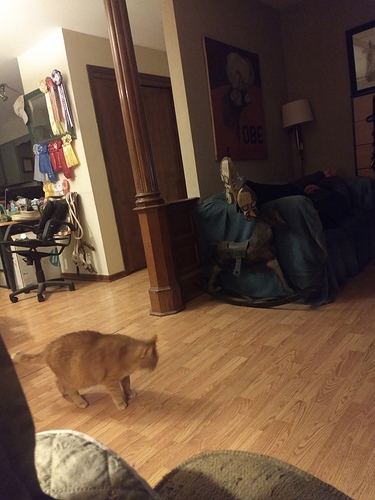 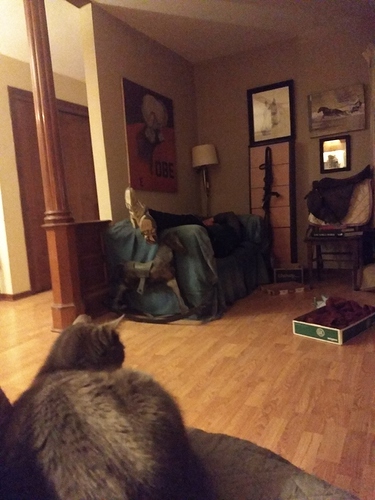 Cats are so funny. The little ideas they get in their heads. And then punish YOU for.

I had to be in the hospital for a few days with a fractured ankle and subsequent surgery. I had a friend come to care for my cats. She said the first day she opened the door and all 13 cats were there. They froze, stared at her for a split second and then she said everything went poof! There was a momentary mad scramble and then they all disappeared. She looked and could not find one. She said the entire 4-5 days I was gone she never saw them again. She knew they were there - food bowls empty, litter box full, toys on floor - but invisible cats. When I got home, they crept out one by one - Ted and Ollie first - and pretty soon were all piled on the bed with me. They were so glad I was home, it made me a bit tearful.

Mine usually 'Punish" me when I am late getting home, take too long to feed their Majesties or don’t make room in the bed for them. (They want the whole bed not just some of it.)

Update on my friend’s cat.

The cat was still on strike last night when she went to bed. She woke up around 1:00 and saw the cat standing in the bedroom door just looking at her. She started talking to her, and the cat launched into a long diatribe, meows all over. Really told her off. Then the cat jumped up, and she said for about two hours, the cat was all over her, purring, rubbing against her (and the cat isn’t a snuggler). After two hours of intense reunion, the cat switched off and went to “her” place at the end of the bed. So apparently, my friend has been forgiven for seven weeks in medical facilities, but the cat did lecture her about it.