My vet suggested that my big tabby might benefit from lysine supplementation. She didn’t have a particular recommendation for lysine treats. Anyone have any particular brands your cats find palatable?

I’ve been through a large number of brands and they all had the same issue, super yummy at first but about 1/2 way through the bag the cats would stop eating them.

I switched to lysine powder and just sprinkle it in their wet food. Seems very palatable and easy to add into the daily routine

another vote for the powder on wet food.

Can’t do wet food in this household- they’re both grazers who take four bites of anything and then walk away and come back in two hours. Heaven help you if the bowl is empty but neither one of them will clean his dish, just in case someone forgets to refill it later.

The cat who’s being recommended the lysine is a good patient and would be all right having powder put in a broth suspension and syringed down his throat if he didn’t care for the treats, as long as I gave him a lick of cream cheese to make it up to him. He’ll probably eat it if he thinks his brother wants it.

The powder can work on kibble, but you could also add to a wet “treat” such as Churu lickable treats.

Two foster cats introduced feline respiratory herpes into my house cat 14 years ago. (Plus we ended up keeping the charming boys anyway!) I’ve been using the Vetoquinol Enisyl paste in the pump ever since. All 7 of the cats I’ve given it to have eaten it.
Enisyl-F pump

at Chewy.com
The two “fosters” Morris and Malcolm who were supposed to just be here for a few days between their old home and a new one, and their sibling Simon who came to us at an 8 week old kitten. It was a herpes flare-up that extended the two cats stay here. By the time they were over the respiratory flare-up, my friend had been given two kittens. When we released the two 1 year old cats into the general household after their quarantine/recovery, they greeted their brother and the three acted as if they had never been separated as kittens. Even though we had three other indoor kitties, we couldn’t separate the brothers so Malcolm and Morris stayed. And thus began the Lysine supplements. 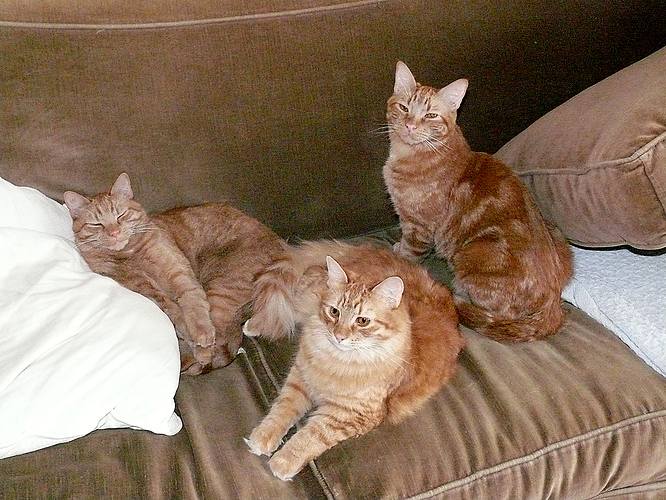 Anyway, we tried a few Lysine “treats” over the years with no real success, so we’ve stuck with the gel in the pump because the cats have all eaten it off their food twice a day every day. We’ve had very few herpes flare-ups over the years–and only mild ones. Usually increasing the lysine dose for a few days to a week has been sufficient to knock it back. Our household is pretty low stress for the cats (and dogs) too.

Two foster cats introduced feline respiratory herpes into my house cat 14 years ago. (Plus we ended up keeping the charming boys anyway!) I’ve been using the Vetoquinol Enisyl paste in the pump ever since. All 7 of the cats I’ve given it to have eaten it.

Thanks, I hadn’t seen this as a method of administration! Looks like you top-dress this on food- dry food? Once or twice a day?

I’m not sure which cat introduced it, as both my boys came into the household via the great outdoors, but I do know that Bartholomew, the one who has recurrent runny eyes, is a big worrier and Alfie is king of his own world so has nothing to worry about! I’m assuming they’ve both got it and it’s just that only one of them is sensitive enough to be symptomatic, so I’d planned to supplement both cats, but hand-feed an extra dose in times of stress. Looks like with a gel, I could put the extra dose on Barth’s paw to make sure he’s the one who ingests it. That would be easier than hand-feeding one cat a Special Thing No One Else Is Getting in a house that includes another cat who eats everything that isn’t nailed down, and a dog with a whopping case of FOMO.

You have a very handsome collection of pumpkins! I’m a sucker for orange tabbies. The smug one at the right is particularly striking.

Yup, we top dress it on their food. We’ve switched to all wet food now, but they ate it on the dry kibble for years.

We only know that Malcolm and Morris introduced it because of how they had a flare-up when they were here to be transferred to their intended new home. None of our cats had ever had respiratory issues before that. Once they were recovered from that initial respiratory episode and allowed to mingle with the other cats, we eventually had a few mild episodes in some of the other kitties. The lysine supplementation seems to have kept flare-ups to a low frequency and mild impact.

The smug one on the right is Simon, the brother that joined our household as a runty kitten.
7 week old Simon the first day at home: 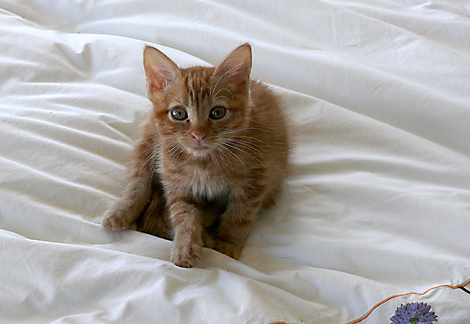 A few weeks later after he’d settled in! 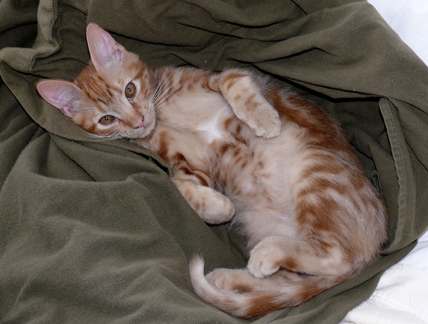 The three of them are still snuggle buddies and playmates at 14!!! They do NOT act like senior kitties. Simon is in remission for GI lymphoma (5 years and counting!!!) Our other kitties have all passed on after long lives (the most recent was our 20 year old tortie, Bree) so we are down to just the three orange brothers. (Plus 2 dogs and some horses

I am in love with Simon. I see he started perfecting his “more perfect than thou” expression at a young age.

Here is Bartholomew, the patient. Barth grew up in a rough neighborhood and was kicked out of his house. A woman who cares for a feral colony in the area saw him meowing on the porch to get back in. She was able to trap him and now here he is. He hated me on sight and it took him five years to warm up to me; however, he was convinced my husband walked on water. We are now the very best of friends and he hasn’t bitten anyone in about 6 months. 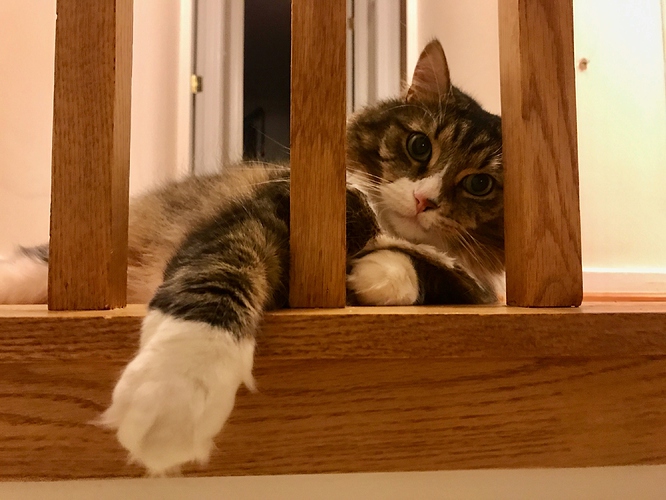 And his brother, Alfie. Alfie was found by a friend’s mother, who lived in the woods with no close neighbors. One night she heard meowing on her front porch. She opened the door and he strutted inside like he owned the place. She was certain he’d escaped a loving home but he wasn’t chipped and no one claimed him. So we did. Alfie has not stopped meowing since then, nor has he stopped bulling through doors, but he does at least now have a microchip and a loving home. 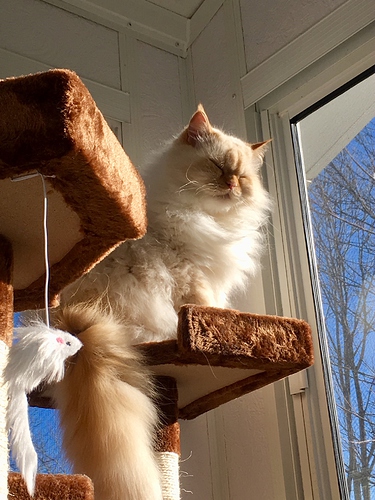 I’ve always had rescued or adopted kitties (quite a few special health needs ones that came to me through the vet clinic when I was a tech). Simon is the closest to a not-rescue, but he was the runt of the litter and half the size of the others so I picked him to make sure he would get any extra care he might need. (When we took his brothers a year later, we discovered he had indeed caught up!) Simon is super clever, very curious, and supervises everything. His brothers are mellow dudes. We love them all.

Our dear, Bree, who came to us after a rough few early years with poorly healed injuries from having been hit by a car in her previous home. She lived with us for 17 years until we recently had to say goodbye when she was 20! She was such a happy and spunky little cat right to the end. 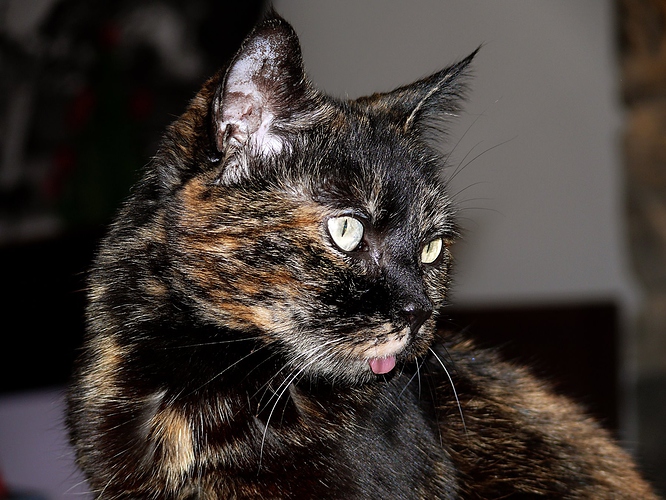 We lost Simon’s best friend/brother from another mother, Gimli, a year ago when he was 17. He liked to pretend to be prickly, but he was really a sweetheart: 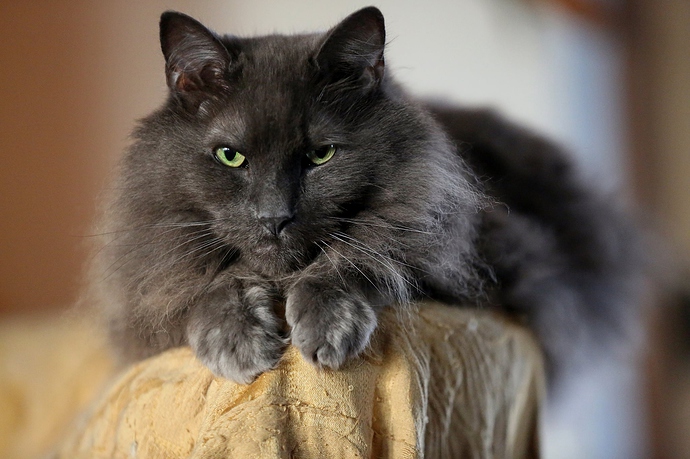 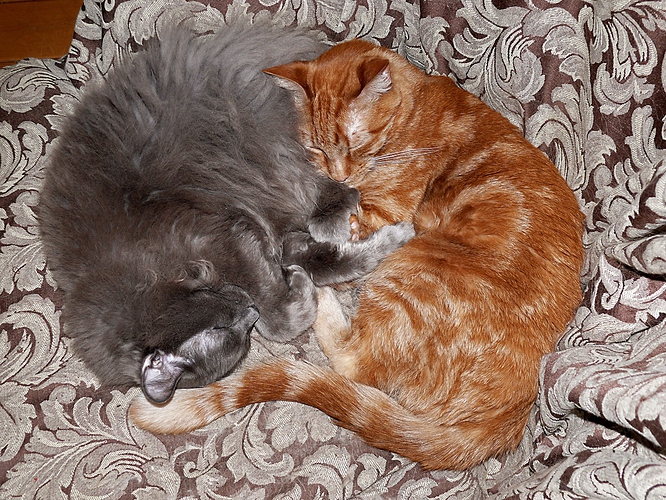 @DawnJL Thank you again for the tip on the gel/paste administration. My local pet store had a Vetoquinol lysine gel in stock, so I picked that up. Unfortunately it is maple flavor (?!) and I wasn’t sure how that would go down on food. The answer is “very poorly.” Even Alfie, who has the taste buds of a raccoon, turned up his nose! But it’s very easy to put some on their paws in the morning at breakfast time, and no one has bitten me over it (yet). Once this runs out I’ll try the one you recommended, which looks like it probably has a much more cat-friendly flavor.

I checked the pump of gel lysine that I have and the relevant flavor ingredients are “fish oil” and “tuna flavor”. I’ve used it with 6 cats over the past 14 years and all 6 have eaten it on their food.

Gimli was a wonderful cat. We got him from a shelter when he was about 8 weeks old and had him through 17 1/2 years old. He was a great blend of feisty and sweet. I still miss him, but am so grateful to have had him in our family for so long.