Hey everyone, I’m new to breeding. My mare has become unexpectedly pregnant. I literally had no idea until 2 days ago when I noticed her teats seemed swollen. I was able to express quite a bit of fluid, which was thin and yellowish in color. I did not express anymore, as I didn’t want to deplete her colostrum. The only stud she has had access to is a standard grey donkey, so I guess I will have a mule soon. Question is, how close do y’all think she is? I have called my vet, so hopefully he will come out soon. She seems to be forming her bag, but her belly doesn’t seem much bigger than usual. Sorry for the dumb questions, but this is the first time I have had a horse with foal. Oh, and she is 9 years old and this will be her first foal. Can anyone tell from the pictures of her bag how far along she may be? Anyway, any input would be helpful. I’m a newbie with this! Thanks 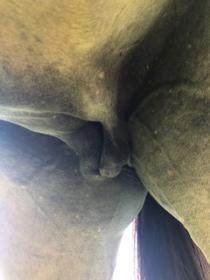 If this is her first pregnancy and your first foal you should have a vet out to check her. You will get some idea of how far along she is, what to look for in a healthy delivery and what you should look out for if this go wrong. Keep the jack away from the mare during her foal heat, which is usually 6 to 8 days postpartum. unless there is a market for oops mules in your area.

I agree that the vet would be much better able to confirm pregnancy and assess gestation. But, maybe some math with regard to the exposure to the donkey would help? When were they together, and for how long?

I had this happen. My first horse came as a two-fer but nobody knew it.

I was just a teenager. First horse…poor horse having to try and survive my ignorance and inexperience.
She did fine until late winter when she just looked skinny (a 3-4) and rough…but she had a big belly.She had tons of forage but obviously we were not giving her enough hay over the winter. I was checking her over one day when her belly started jiggling all over. What?? I decided then and there that she was pregnant. Don’t ask me why with my vast expertise I just knew :lol:. We had the vet out and he was pretty worthless. He said she was wormy and not big enough to be pregnant never mind he did NOT palpate her. Well, she presented me with a very pretty molly mule foal about 7 days later. Since nobody would believe me or at least do a proper exam, and I thought she would foal in maybe a couple months not in a week, nature took its course and she had an easy delivery and everything was fine. The mare of course foaled clear at the back of the property and we had to go wrestle Ms. Mule as the mare would not leave her…but would follow her. We stuffed them into a big stall in my Grandfather’s cow barn as it had snowed that morning (March 1). Even the guy I bought her from (a co-worker of my Dad) thought there was no way she could be pregnant. Yeah, there was a jack in the pasture but he never bothered the horses :eek:. The owner of the pasture said that jack would wear those mares down when they were in heat. Would not leave them alone until the deed was done. All of the mares in the pasture were bred.

I echo everyone else. Get the vet out and get her palpated. Your mare doesn’t look much different belly size wise and udder than my mare did. Maybe my mare’s udder was a little more filled but not much. Boy when it was time, everything happened fast. My mare did take a fall onto her side a few days before she foaled. Whether that hastened things, I will never know.

Thanks everyone! She has been pastured with the jack for 4 years. I bought her, the jack and another Mare from a friend about 7 months ago, so she was probably already bred when I got her. If I don’t hear back from my vet today I’ll be calling a new one. Yesterday I could see and feel the foal kicking, so that’s a good sign!

And of course you will post pictures of the baby when it’s born, right? :yes:

Thanks everyone! She has been pastured with the jack for 4 years. I bought her, the jack and another Mare from a friend about 7 months ago, so she was probably already bred when I got her. If I don’t hear back from my vet today I’ll be calling a new one. Yesterday I could see and feel the foal kicking, so that’s a good sign!

So…what makes you sure she’s a maiden mare if she’s been pastured with a jack for 4 years? You know for sure she’s never been pregnant/foaled before?

Is the other mare pregnant? Just curious why you’re keeping them together since pregnancy is obviously a possibility?

I will absolutely post pictures! And to answer your question S1969, I bought her and a 3 y/o paint from a good friend at work (before going into poultry business I was a paramedic). I asked him if either had ever foaled, and he told me no. I called him recently to tell him of Sister’s pregnancy and he was as surprised as me. The two mares had been pastured with the jack for 4 years and never were successfully bred. I have 2 other mares, neither is pregnant (that I know of). I have separated the jack so he isn’t pastured with them anymore. I have 3 geldings as well. So 6 horses Total. I’ve had my geldings for 10 years, but only recently gotten into having mares, so foaling is new to me. My preggo Mare is a red dun and the jack is standard grey, so wondering what the possibility of color will be for the mule. Oh, and I never separated the jack from the mares because the friend said he was so old, he never tried to breed the mares… yeah, right. Obviously that isn’t true. Stupid me!