Does anyone have experience with a manganese deficiency?

Had a mineral panel run last week and horsie came back with low Mn (0.002ppm). Vet said this is quite strange and is going to research before she’s out again next week and we’ll talk more. Interestingly enough, low Mn is associated(but not confirmed) with limb abnormalities and he does indeed have congenital contracted tendons… It’s also used it joint cartilage and he has joint fusion from a young age…

I’m assuming this is a chronic deficiency. He’s always been on a complete ration so his nutritional needs should be met, FeedXL says he’s getting 168% of his daily Mn. His iron, copper, and zinc are all in normal limits.

Anyone see this before? From what i’m reading it’s not very common. Would megadosing Mn be enough or maybe he has some reason he’s not absorbing the Mn?

From this research sounds like the side effects could be quite specific, not generalized poor health. There are also warnings about overdosing since it interferes with other minerals.

From this research sounds like the side effects could be quite specific, not generalized poor health. There are also warnings about overdosing since it interferes with other minerals.

I did find that article. His overall heath is good. The blood was run to check Selenium levels(normal results) and the rest of the minerals came with the panel. That’s also why it’s surprising, I didn’t expect to find anything else.

He does get beep, so his diet does have higher calcium, but I don’t know if it counts as high calcium like the article said.

I’m not going to supplement anything until I talk to my vet next week.

I’d wonder if it’s a lab error and might be tempted to retest before making changes, especially considering FeedXL says he’s covered.

I’d wonder if it’s a lab error and might be tempted to retest before making changes, especially considering FeedXL says he’s covered.

I’m waiting to hear what the reference ranges are, as that would be a big clue if it’s lab error. I’ll be pretty annoyed if it was lab error and they didn’t label it as such. If it’s a point or two below, probably legit. Way below it’s probably not. I think it’s a pretty stable mineral though.

Could be. Would explain his other limb abnormalities if he’s always been deficient because that’s just how he is.

I’m waiting to hear what the reference ranges are, as that would be a big clue if it’s lab error. I’ll be pretty annoyed if it was lab error and they didn’t label it as such. If it’s a point or two below, probably legit. Way below it’s probably not. I think it’s a pretty stable mineral though.

Lab errors aren’t often identified until the blood is drawn again and tested again. It’s not like an erroneous reading comes out of the machine with an exclamation mark identifying it as an error. There are all sorts of things along the chain that may have caused a false reading.

Resurrecting this old thread because I was searching in history and this came up.

My vet sent a screen shot of my boys blood work through today, as you can see his Manganese reading is at 0.002 as well. Waiting a consult with my vet, but wondering if there is more info on the results here. 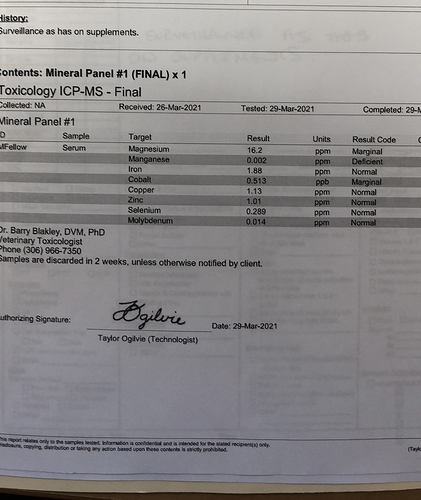 @KBC I don’t really have any more answers. I repeated the Manganese testing twice since, the second confirmed that it wasn’t just a lab error, then the third showed very different results. First test was done at Saskatoon (same as yours), the second two were done at Guelph.

The third was done in July when he was on pasture, the other two he was on hay in a paddock. I’m assuming part of the third result was due to different mineral balances in the pasture vs hay. I did also start him on a hoof supplement, Kerabol, on the advice of my vet. That was started after the third test. My vet recommended it as it has added manganese. The quality in his hooves has largely improved, when he was barefoot last year he hardly chipped at all, huge improvement over his historically very shelly feet. This year, he has yet to throw a shoe, so that’s great. But I can’t say if that’s all the added Mn as I haven’t given him a hoof supplement before.

My vet had consulted with an internal specialist regarding the last bloodwork results and the internalist was more concerned about the low zinc than the changes in Mn. This past December, I had him at another clinic and mentioned to the vet there about the low Mn and they said they see it fairly often and that it doesn’t mean much. This vet was also a internal medicine specialist. I had them pull blood for another Mn test, but the sample didn’t get to the lab in time (due to Christmas). I have an appointment coming up for a float, so might get them to retest it then.

I’m not sure I’d read anything into it

Serum manganese and cobalt concentrations are more difficult to interpret than other minerals, but determination of their serum concentrations may still be useful as screening tools.

If the entire diet is evaluated (as in, hay is tested), and intake levels are appropriately high, then look at the ratios of fe:cu:zn:mn

You can have enough Mn (maybe there’s 500mg and the horse is 1100lb and only needs 400mg), but iron is 10x what it should be. This likely means relative usage - not intake - of cu and zn and mn are limited because of that high iron

Balancing things to get to at least a 10:1:4:4 ratio would be very useful, and working to get below 10 for that iron would be even better.

@Bewildered interesting chat with the vet, she is wondering if it’s our water that’s the issue. Where we are the water is high in sulphur, and sulphur locks up the manganese! She isn’t worried at all by that, just an interesting thing to monitor. We do need to increase his magnesium supplement, and throw out a blue salt block for him!