My friend Mickey is a modern pentathlete and a great rider. It’s a really neat sport!

Michelle "Mickey" Kelly (born c. 1978) is an American pentathlete who won bronze medals at the 2005 Pan American Championships, 2007 Pan American Games, and Gold at the 2018 Masters World Championship in Halle, Germany. Kelly is the daughter of Michael and Betsy Kelly. She has six brothers (Jamie, Chris, Casey, Josh, Al and Zilla) and three sisters (Sara, Emilie and Jessinia). In 1996 she graduated from Chatham High School in Chatham, New York, where she trained in cross-country running, baske...

The FEI does not regulate Modern Pentathlon. Sadly, I have not enjoyed watching the riding elements of the sport at the previous 3 Olympics.

@Xctrygirl, are they going to broadcast any of this?

Sadly, I have not enjoyed watching the riding elements of the sport at the previous 3 Olympics.

Agreed. There are some good, kind, competent riders in the sport, but the majority are awful.

Equestrian is the only Olympic sport where a lack of athletic competence can harm an animal. For that reason, I’d really love to see them remove the equestrian phase from pentathlon. Or at a minimum swap it to first level dressage, with rubber snaffles being mandatory

It would be nice if the jumps were lower. I think the height is up to 1.20m.

I just watched a couple of rounds from the London Olympics. Painful. The horses are saints.

The FEI does not regulate Modern Pentathlon. Sadly, I have not enjoyed watching the riding elements of the sport at the previous 3 Olympics

As someone whose horse was used in the Pan Ams for this, I agree, although it was an awesome experience.

I saw 2 rotational falls, and most the riders couldn’t ride. They need to spend WAY more time in the saddle and less in the poool.

It would be nice if the jumps were lower. I think the height is up to 1.20m.

yeah, they are HUGE. At the Pan Ams they were massive, and the thing that bothered me most was the entire course was set on a 1/2 stride. Like, the riders are already barely getting around, why make it THAT much harder for them to get around. It resulted in many, many falls, and rails flying. Like 8 rails was a good round. My horse has a massive stride so it just meant she did everything one less stride…which was very exciting to watch LOL

Wow! What was that like, letting them use your horse? What information/notes were you able to give? Would you do it again?

Overall for me it was an incredible experience for the actual competition. Behind the scenes however, was an organizational nightmare that involved a very tight clique of officials, who were brutal to deal with as an outsider (IE not a regular Pentathlon member/athlete/familiar person). For those of us “outsiders”, we were treated like garbage and they tried really really hard not to use our horses. Basically, we were paid per time our horse was used. So you get paid for the jury ride, and each portion of the competition, so each time for the ladies ride and each time for the mens. So they wanted their own horses used, for obvious reasons.

The people in charge brought all their own horses and most of them were not sound or suitable. These were hunter or jumpers normally on the Trillium and A circuit. They didn’t want to use a few of the other horses, mine included, another 4 that were “outsiders”. One of these horses was an A circuit 1.20 winner. Really nice reliable horse.

Anyways not all of their horses passed the vet or jury ride. So instead of using the outsiders horses, they brought in more hunter/jumpers, including an ex GP jumper. Problem was, the horse had a rotational in the warm up. Another horse dumped riders and wouldn’t jump. So they had no choice…and my Penny got the call up.

Penny was one of only 3 out over 20 horses to jump clear in the jury ride. A professional rides them (not me) and tests them out and gives notes etc. The teams then watch the jury ride and get an idea of a horse.

So the one night I was schooling in the ring before the start of the competition and team Peru was watching…as I go by they all say - “thats Not Just A Lady, we want that one!”. So that was pretty amazing LOL. Basically in this event, they want a horse that will jump no matter what, and that is Penny.

So once Penny got the call up - we go to the main arena and line up. They draw the horses from the person in last to the person in first currently and announce it. Then we trot the horse in front of the crowd and out. Penny, was picked by Charles Fernandez who was in the Gold medal position. My parents, just happened to be sitting in the bleachers with his parents randomly. They were SO excited when they realized that.

The rider is then allowed to chat and meet the horse briefly. She was only used for the men’s because she was simply too strong for the women in their opinion which, is fine when you understand the riding level. The rider and the coach asked how she rides, there was a language barrier…they kept asking - will she jump?? You promise, she will jump? I would say yes, she will jump! She will never not jump. But they were so worried. So then I said, listen, shes an event horse! You know eventing…I don’t know what it is in Guatemalan, and they say - ohh Evento evento and started dancing around all excited. It was so funny and they were really really happy they picked Penny.

Then we tack up and get ready for their ride time. The rider gets 20 minutes and I think 5 or 6 jumps allowed before they go in the ring. It was really funny seeing Pennys reaction to having a man ride her, she was not happy at first but got over it quickly. I was super super lucky that she drew decent riders. A Canadian Josh Ryker Fox also drew her. Both Josh and Charles were probably the better of most riders there. It was also crazy hot, around 36 with humidity to add to the fun. Thankfully they had great cooling tents etc.

She had a few rails with Josh and and Charles, but most people fell off or took the entire course down, so Charles maintained his lead by a big margin going into the final two phases - running and shooting. It was a nail biting finish, as Charles missed about a hundred shots and the others were creeping closer and closer in the run because of that…but he held it together and won the Gold for Guatemala.

After his win he came over and gave penny an apple and a kiss. He didn’t have his medal yet but I would have loved to have gotten a pic with it with Penny.

So overall, it was an incredible experience, BUT there needs to be an intervention with FEI or something similar to deal with the inappropriate horse and not trained enough rider issue.

Some pics from the jury ride, the event, and Charles. 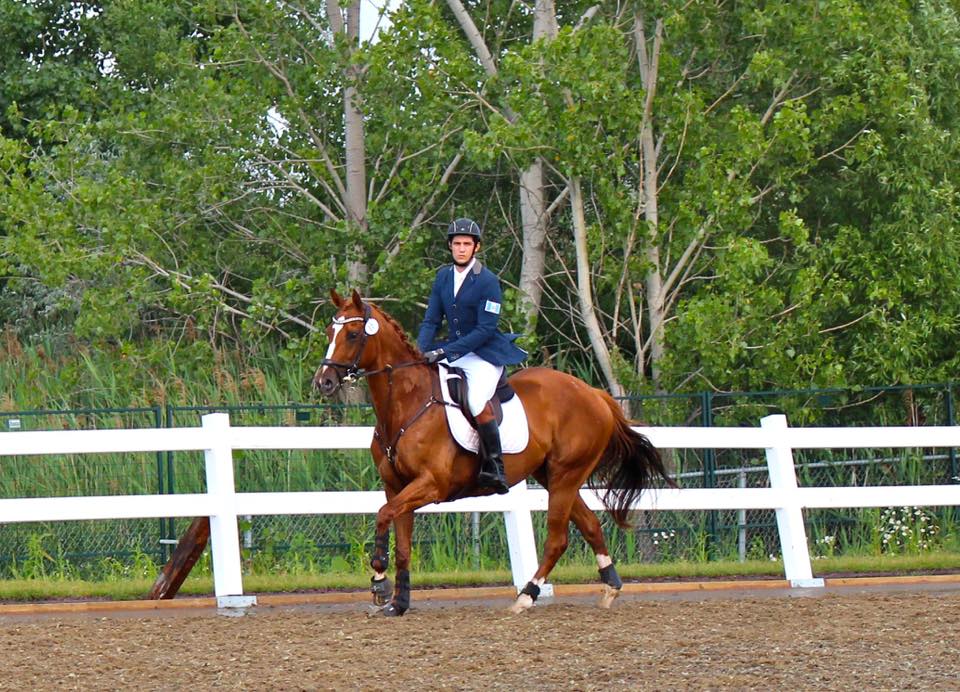 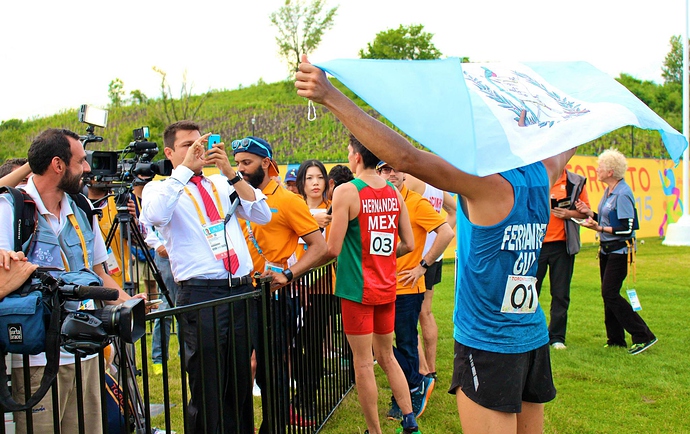 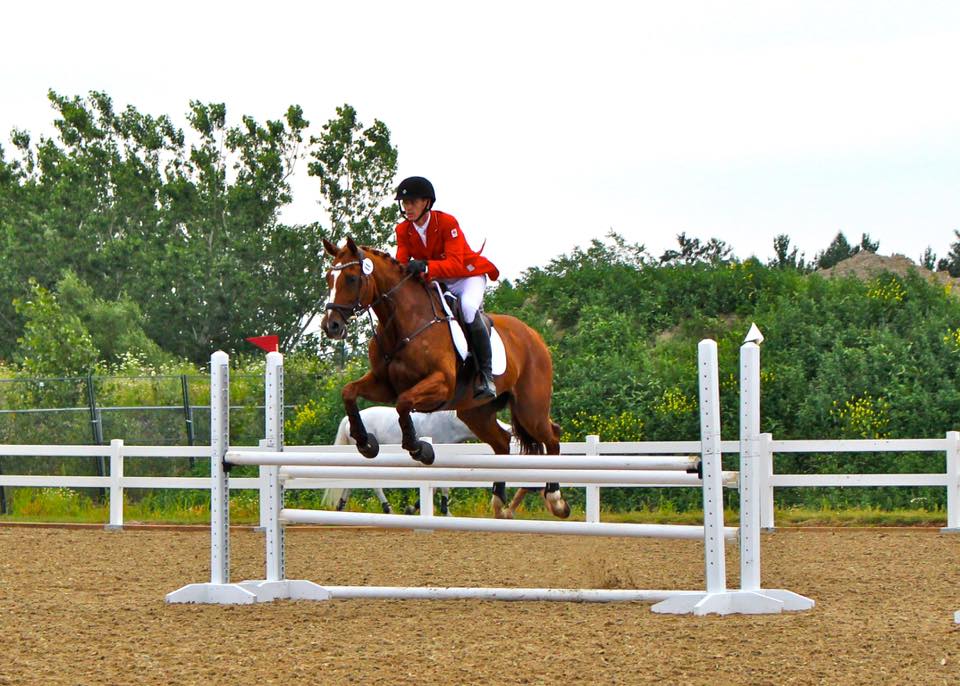 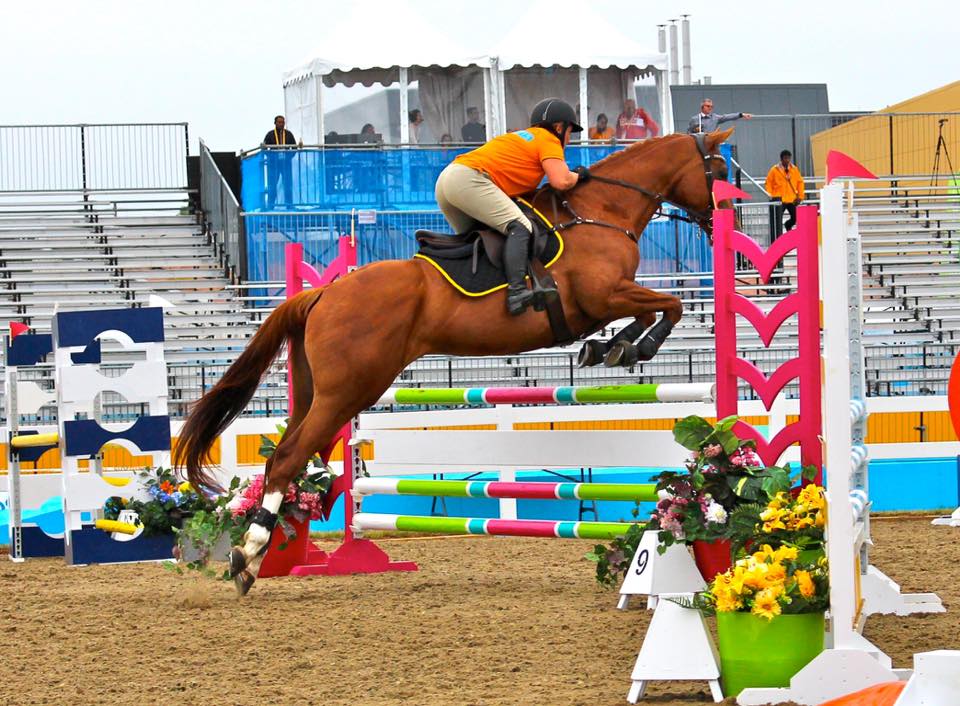 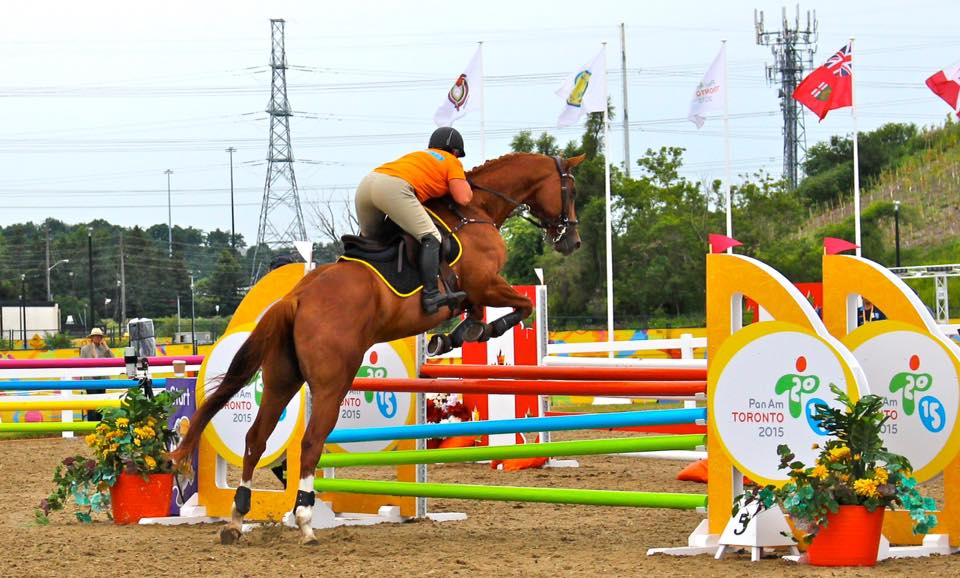 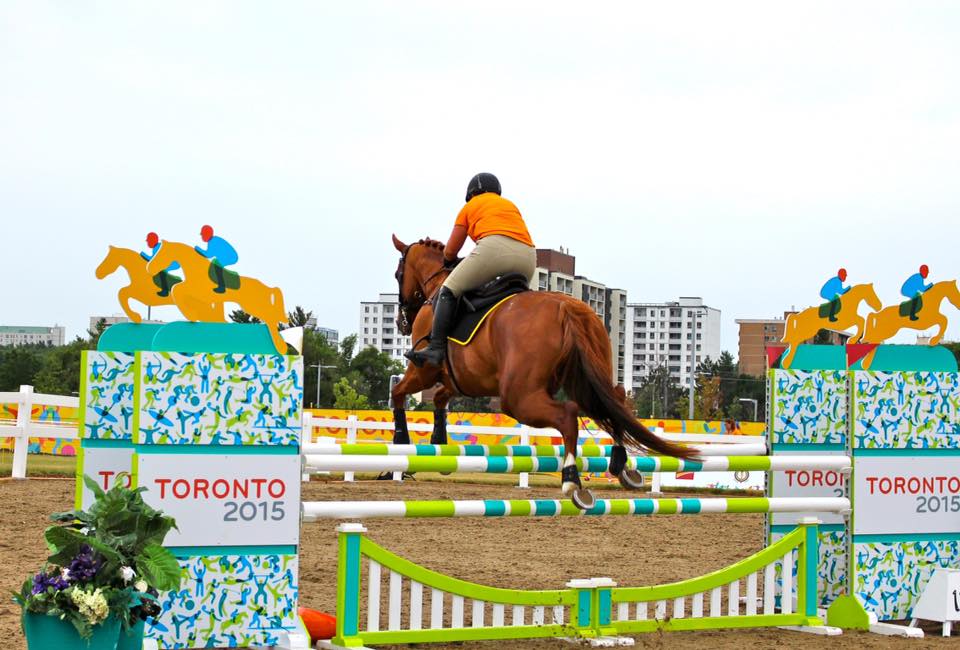 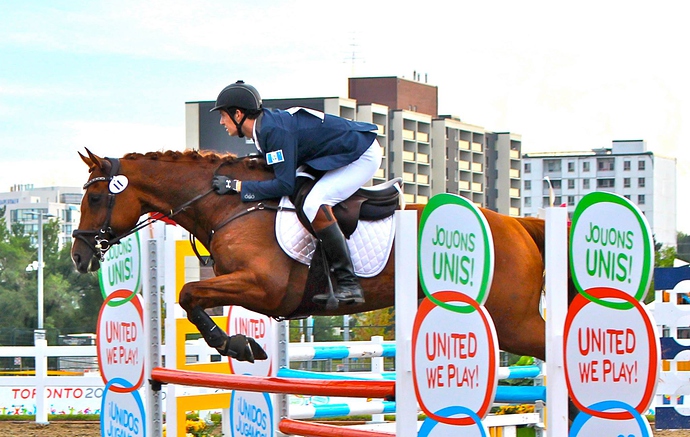 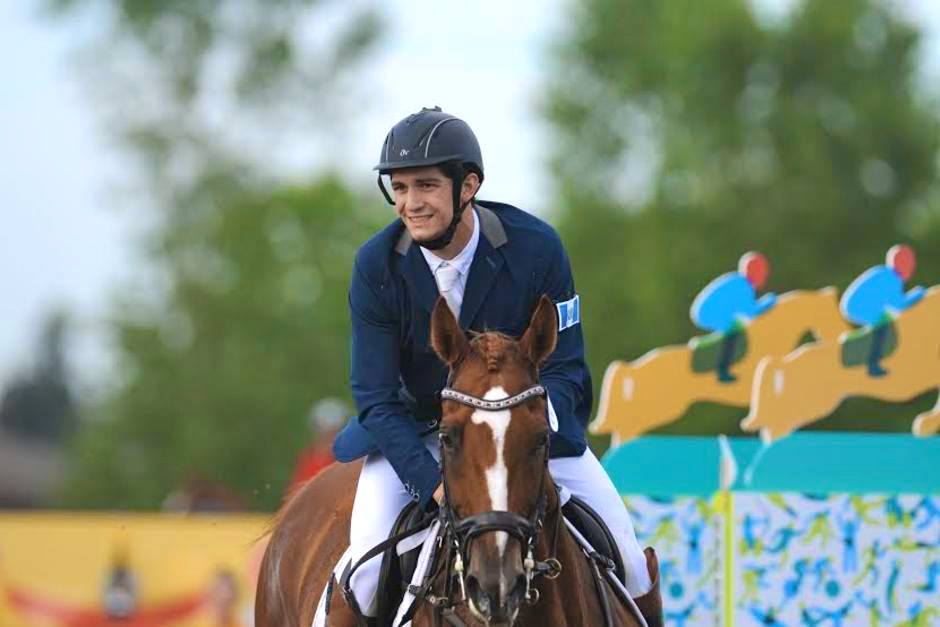 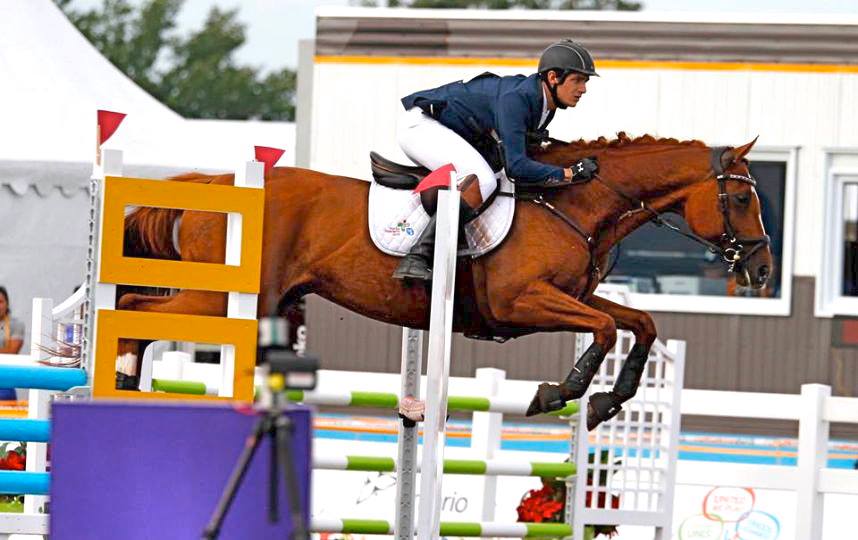 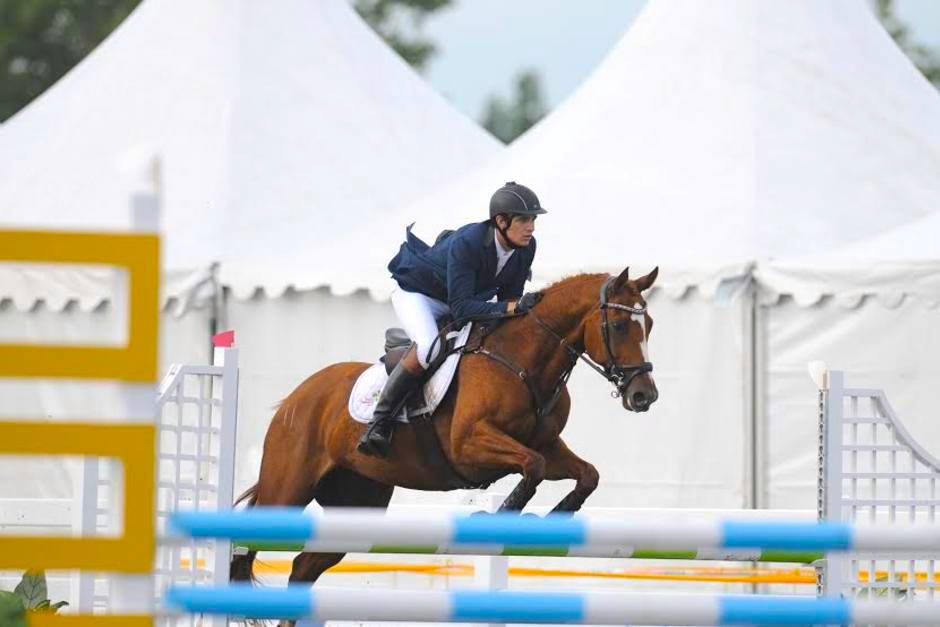 Lovely horse!! Did they ride in your tack?

A friend volunteered during the 1984 Olympics. The horses got schooled by pros in the ring for a few days before, maybe even over the actual course. Kind of like a pro ride to prep a horse for a junior or an amateur. It sounded like they got schooled a LOT as compared to what @Jealoushe experienced.

Is she still your riding / show horse? She looks irreplaceable! Such a kind happy expression. Those riders really hit the lottery with your Penny.

Aww thank you! She really is irreplaceable. I still have her, we aren’t eventing this year because of COVID. We were aiming for a CCI 1* but it was cancelled. She has been eventing for 8 years with me, she is still only 15, but she has given me a lot. So she’s not doing anything other than bossing around my other mares this year. I had thought about breeding her, but I can’t decide on a stud lol She can enjoy a year off and I’ll bring her back over the winter and see if the FEI event runs next year. I would rather not ride her into the ground, she owes me nothing. Gives me time and money to focus on my young ones 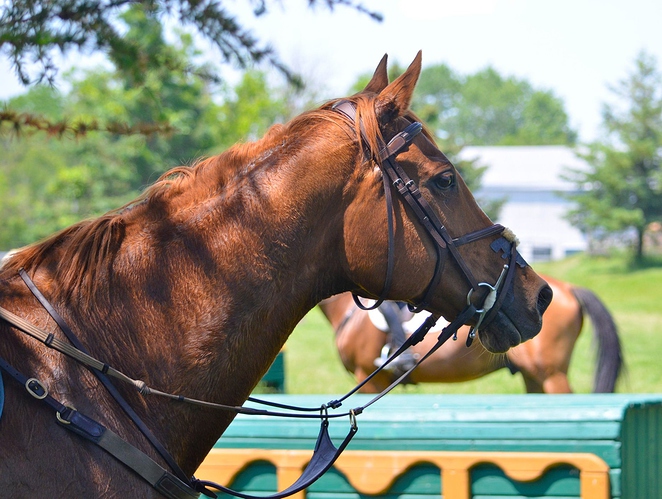 The horses got schooled by pros in the ring for a few days before, maybe even over the actual course

We only had the one Jury ride, which was by a professional, but it was really just so the riders could see how the horses go. The rest of the schooling was left up to us…probably not the best set up

I’m always so conflicted about this event because part of me loves that our sport gets more exposure to a whole other group of athletes that maybe wouldn’t have otherwise gotten involved. But then the majority of the jumping rounds terrify me.

I would love it if it was safer for riders and horses. Maybe lower jumps like they do for IEA/ IHSA would work well. Or have some sort of a qualifying round for the equestrian phase where maybe they do a flat class first and then only the top riders that do well in the flat phase get to compete O/F?

I love the idea behind it though and I’d love to get into it one day. I’m a runner but I’ve done triathlons too and I’d probably love this if it was easier to get involved in!

She certainly would be a mare you’d hope to duplicate! Or at the very least pass on some of her lovely qualities. Good luck if you go that route. The stallion would have really big (horse) shoes to fill! To complement her properly … I understand your wanting to make the very best choice.