My mare hasn't OVULATED yet!

Alright I have a 7 year old maiden paint mare that I am right in the middle of breeding. She got to vet on Friday April 16th to check to see where she was for breeding. Vet confirmed she had a follicle and to get semen that day or the next day, as he didnt think it would last long. He gave her a shot on Friday for ovulation (Not sure exact which one) than he got semen on Saturday evening an inseminated her. Than sunday he said he removed some fluid with delayed the second dose of semen but inseminated her again late Sunday night. We are now Wednesday the 21st and she has not “Ovulated” yet. He said this is not abnormal but doesn’t happen alot. Can someone please enlighten me on what is going on? I tried breeding her last year same time an she didn’t take. Am I breeding to early in season for a maiden or what?

When you are breeding “mare” is a four letter word. I learned two new words in my venture “anovulatory follicle”. Everything looked great in the repro exams but it just wasn’t meant to be. Hopefully your mare wants to be a mother more than mine did.

So vet contacted me today and said she still didn’t ovulate but dropped a second follicle… says its not uncommon but to take her home an watch closely and write down her teasing behavior an see if she ovulates than when shes done we can give her a shot to get back on track an ovulating correctly. Is there anything else that may help or trigger or just breeding later in year or?

I would tease her with a gelding if you have one. Write down when she is in season and give her another cycle and attempt re-breeding on either the next cycle or the one after.

I had a mare that had a huge follicle and was “ready to breed” but wanted nothing to do with the stallion (live cover, so fortunately didn’t pay for a collection and shipping). She was apparently still transitioning…cycle was not yet regular.

How experienced is your veterinarian with breeding mares? Is it possible she is still in transition and hasn’t started ovulating yet? Did your vet check for edema?

Ok… so there’s a lot of red flags or lack of info here (either that your vet didn’t provide to you, or you didn’t provide to us).
First off, a vet does not tell you to order semen based solely on her “having a follicle”. How BIG was it? Was it 20 mm? 25? 30? 35 mm? Many vets will never tell you to order on anything under a 35-40, unless there’s very clear indications that the mare doesn’t grow them big and is close to releasing a smaller (40ish) follicle. Indicators for that would be edema (feel and amount), shape of the follicle (is it perfectly round, or is it squishy and irregular, indicating imminent ovulation?), etc.
My first broodmare ovulated around the 40mm mark pretty consistently (give or take 1-2 mm), but my last mare grew them big - always 50-55+ before she popped.

If your vet had good reasons to think she was very close to ovulating, but didn’t do so within 5 days, either your vet is totally incompetent or your mare isn’t cycling properly yet.

And the “shot” he would’ve given her to induce ovulation is called HcG.

I didn’t go into alot of description on here but now that i think of it he didn’t tell me what size of follicle she had that i can remember. When i brought her in on Friday he said wow looks like she has a good follicle that hes certain will stay an to get semen that day or Saturday. Gave her the shot. long story short the breeding farm that collects the stallion suggested i wait as mares were having problems getting going this year an taking of there first heat cycle 100%. But said he could fly semen in if he had to for Saturday evening insemination. The vet got it an inseminated her than checked her sunday morning and said she had fluid so delayed her second straw, but got it done late Sunday night. Monday i get call saying she hasnt ovulated yet but she still has time. Same Tuesday came around an said hes watching her close than Wednesday he called an said well i think i know the problem she dropped another follicle but now showing more heat signs. So sent her home… i may have missed follicle size an more in depth as i was upset through this all with fighting with breeder last minute to having semen flown in. Ive never done AI thru a vet and just felt kinda over whelmed. An than to find thru all the rushing an timely stuff she didn’t ovulate… what are some things i need to ask my vet? Shes now coming out of her ACTUAL heat cycle this time, as weve been teasing her an shes showing serious signs but now mellowing down an loosing interest. Should i wait another cycle in between or should i short cycle her an get back on tract an breed her on it?? 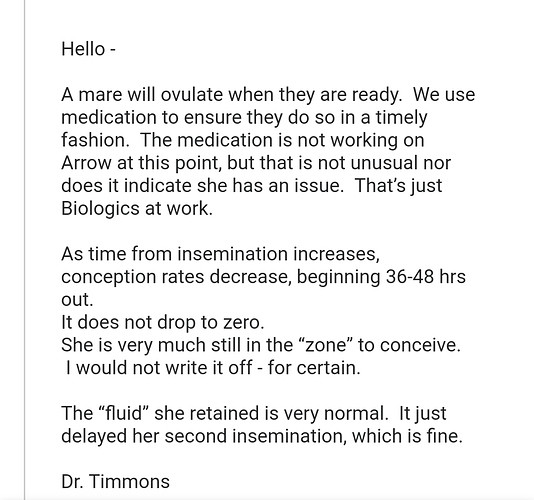 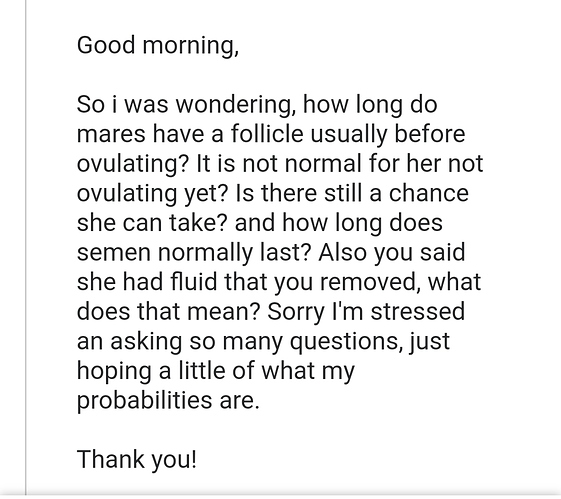 Mares can, at any time, have an anovulatory cycle. This means they grow the right sized follicles, and everything looks good starting out on ultrasound, but then they fail to ovulate. It doesn’t mean your vet has done something wrong. They can also ovulate later then predicted or earlier then predicted. I believe they can ovulate more then one follicle which is why you have a risk for twins.

How old is the mare? As that influences conception rates.

You can get her pregnancy checked at 16 days. See what everything looks like at that point, and wait for her to come back in season normally. You can short cycle her if you want a foal earlier in the year, but unless you really need the foal born early in the year, you don’t have too. Short cycling will cause an abortion if the mare is pregnant so I probably wouldn’t short cycle her unless you are absolutely certain she isn’t.

If you do have an anovulatory cycle, the vet should be able to tell on ultrasound follow-up. If that is the case then you can go ahead and short cycle because the mare should not be pregnant.

That makes more sense thank you for going more indepth with that. Its hard for me to comprehend things especially with this whole breeding thing. Knowing she didn’t ovulate in that time frame he AI’d her, wouldn’t that guarantee pretty much that she didn’t take? Shes a maiden 7 yr old paint mare. 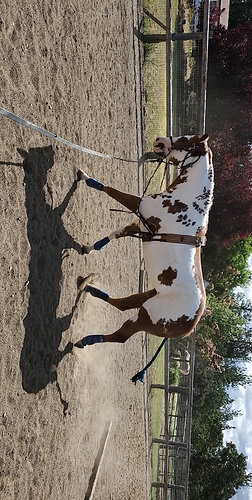