Some interesting things in here.

Always nice to see science trying to prove common sense things that most of us already know! No, seriously, it gives us something to cite to back up what we know.

I love seeing studies like this! I agree that many have anecdotal experience that aligns with similar studies but it’s nice to see research specifically 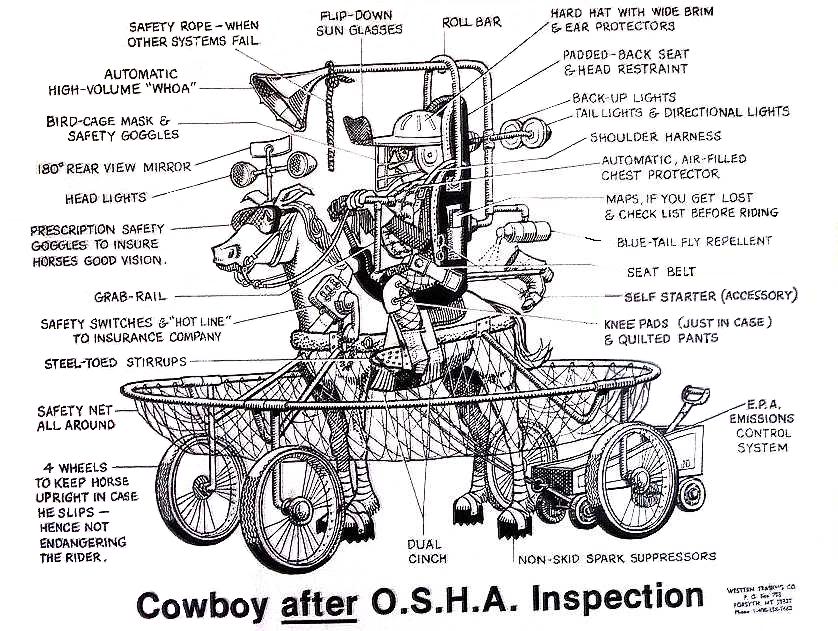 My dad gave me this cartoon eons ago💗.

I’d like to take the survey and see how my horses score. Couldn’t quite make sense of how to use Table 1 in Section 2.3.

well falling from height is the probable cause of death related to the “horse inflected deaths” not specifically the horse, not the horse going on a wild killing spree… I have had neighbors die from falling off six foot step ladders while changing light bulbs in their garage door openers.

Each year, there are more than 164,000 emergency room-treated injuries and 300 deaths in the U.S. that are caused by falls from ladders.

Table 1 is just listing the variables they explored and the citations for why they are relevant or how they are assessed/quantified. I don’t think the survey they used is available. (At least this is my understanding after skimming - studies don’t usually make their surveys/assessments public, or they are proprietary and you have to purchase them from whoever developed the survey anyway [since usually a lot of time and money goes into validating assessments].)

Nice of the authors to pay for open access for their article.

Thanks for the explanation @Feathered_Feet! I agree, nice to get to read the study for free!

Thank you for posting this!!! There’s a few people in my life I would love to send some highlighted sections of this study to directly 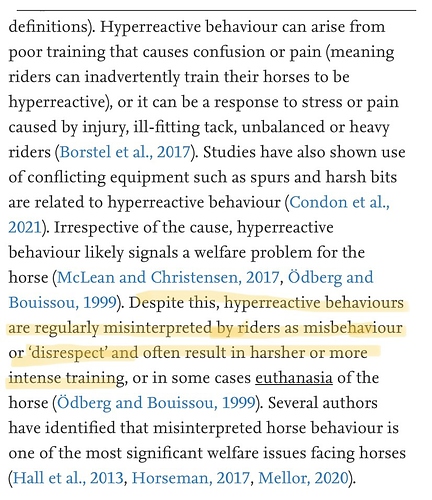 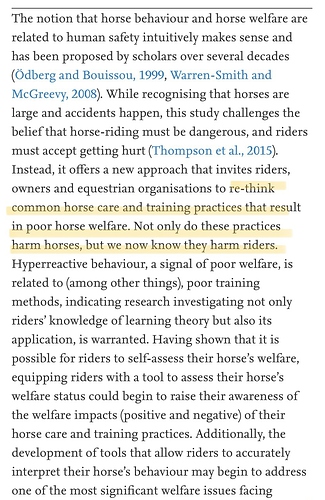 Thank you for sharing @Isabeau_Z_Solace and @sportyspicepony !
I’m developing a class on how saddle fit effects a horse biomechanically and behaviorally and this will fit right in.

Interesting read. However, it seems to come at the view of the “system” that horses are hyperactive because of human actions (the welfare part) versus recognizing that horses are prey animals, so their nature is part of some of these reactions. I wonder how fully folks believe that this level of attention can be trained out of the animal?

It can’t be trained out but can be managed. As an example, if you have a hot horse, give it lots of turnout and free longe buck N run. Don’t leave it in a stall with no chance to move freely and then ride in the indoor arena and be surprised at bucks and spooks. I watch people get into this spiral where horse is too hot to even handwalk to the turnout ring and owner is scared or injured.

There was an article recently but I’m not sure where. The Horse Magazine, perhaps, or Equus. The research found that undesirable behaviors like spooking are seen in domesticated horses, never in the wild. There is another report that examined behaviors of young horses vs. seniors. Horses maintain the same behaviors as they get older, they just take a little more time. I believe it said that in the wild a herd slows down to accommodate the oldster.

I have always loved horses, but scrape the layers off and you find a sailor - single-hander. Dad got me started at age 6. My final decade was spent cruising the Maine coast, including a trip to New Brunswick. I scared myself really badly one day. One of those moments when I had a pretty good shot at capsizing and drowning. Circumstances, including being 53, led me to quit sailing, so I sold the boat and got a horse. After all, it is much safer riding a horse on the land, right?

Horses in the wild will absolutely spook, spin, run a distance, stare, run, bolt etc at dangerous stimuli. The difference is that a horse in the wild or even in a field is free to spin and bolt from the dog, deer, human, etc.

Spooking under saddle can only happen by definition under saddle. The horse can’t spin and bolt because he is constrsined.

Horses in the open tend to be familiar with all the phenomenon of their environment like shadows, puddles birds, squirrels etc so they don’t tend to bolt at falling leaves. They also do tend to conserve energy and bolt when needed only like when the cougar appears.

Spooking under saddle can only happen by definition under saddle. The horse can’t spin and bolt because he is constrsined.

I know a couple horses might argue with you about that.

There was an article recently but I’m not sure where. The Horse Magazine, perhaps, or Equus. The research found that undesirable behaviors like spooking are seen in domesticated horses, never in the wild.

This sort of thing makes me wonder if we have different definitions for these behaviors.

Spooking, as I use it, is found in all horses, and I would define it as a ‘startle of surprise’. Can be big or little. They react to the guy firing up the tractor engine, or a person quickly rounding the bend on a trail just ahead of them, or the arena sprinkler turns on. They throw up their head (to adjust their sightline to see the motion more clearly) or they turn (to align their body with the noise) or they simply dart a few steps away before turning to look. These are all things a person might startle at, as well. Wild/domestic/people/goats will all do this. Surprise is surprise.

I don’t see any way that ‘adequate turnout’ or ‘proper feeding’ or ‘improved saddle fit’ would stop a horse from spooking when the arena sprinklers turn on.

I’m leasing a little mare right now from her own barn (she’s lived there 7 years) where they do exaggerated trail obstacle work. She’ll walk thru a tray of empty plastic water bottles crunch crunch crunch, under a tunnel of streamers, including glitter, and rub up against a wall of pool noodles on her way to the teeter totter. But she’ll still spook if a person suddenly appears on the trail ahead of her around the bend. And these are “her” trails.

I don’t want to give the impression I’m arguing with the study – it’s an interesting study, and I’m sure there are better and poorer way of handling, keeping, training and fitting horses. I even agree that poor handling, keeping, training and fitting of horses probably contributes to problems with them. I’m just questioning the seeming assumption that you can train self-preservation behaviors out of horses, particularly when they are on their own (I admit you can get a team or group to do things more readily than a single.)

I think the point of the article was that poor management would make these behaviors worse and that these behaviors are being hyperreactive not naughty or mean. In other words you don’t train these behaviors out of horses but you change their management to alter their levels of energy anxiety confusion frustration and pain. Then they will still be reactive but not hyperreactive. We have all experienced the difference between a horse that has an honest spook at a real surprise that isnt hard to sit, and horse recovers compared to the horse thar repeatedly spooks bolts bucks at shadows in the arena.

Last night we had our weekly inhand trail obstacle play session. At the peak there were about 10 horses in the arena. There was a classic case of some newbies who didn’t fully understand the concept with N older TB who is known to spook and buck and throw riders. They were hustling him through obstacles to get it done despite him rushing and spooking. Not surprisingly after about 20 minutes he lost it, bolted, knocked over his handler and went on a high tailed bolt around the arena. Luckily I was in with my level headed mare.

Later I was in with project horse. She was hyper alert at the crowd and all the mixed vibes even though she is really good with obstacles alone. I could tell I didn’t have her mind and I kept her at the empty end doing simple things. She improved but didn’t actually settle and relax until the session was over and there was just us and another horse and handler pair chilling.

This is a case of if I hadn’t paid attention to her welfare, meaning her state of anxiety, I would have created a situation where she likely would have reared or bucked or tried to bolt just like the TB because she was so wound up.

I’ve actually kept her out of those sessions up to now but we are at a point where she is totally with me on the ground in low stress situations like alone so I want to test that and see if we can work through stressful situations.

I figured out years ago that you need to manage first energy level (up or down), then mood, then get their attention and focus, and only then can you ride or train. You don’t get on a horse that’s ignoring you, and you can’t even school a horse in hand that’s freaking out. You can do calming things and handwalk whoa back walk but that’s to affect their emltuins not to teach them.

The idea behind the obstacles is to not push the horse but to get them to do a tiny increment calmly so they see its safe to follow your lead. We don’t have a trainer at the obstacle play night so there’s often some newbie that thinks the idea is to push the horse through the obstacle until he explodes.