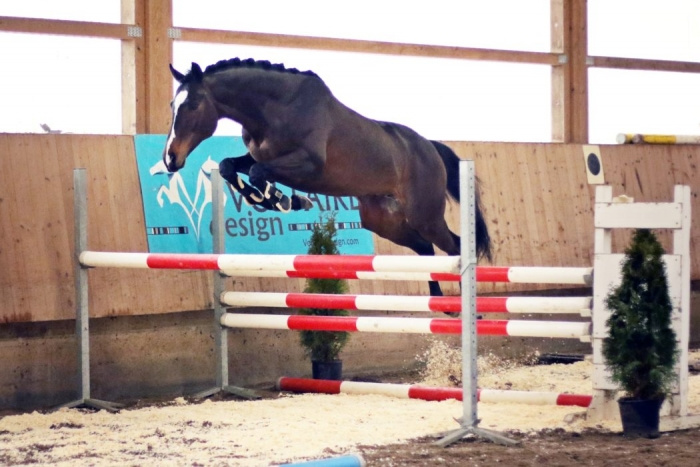 That link doesn’t work for me. I’m curious.

Eventing rider Jörg Kurbel wants to leave the sport more to his daughter in the future and concentrate on other things - including his own stallion station, which already has two residents who should not only be of interest to eventing breeders.

*When Jörg Kurbel talks about his newcomer to the stable, he goes into raptures - Agamemdon xx is a six-year-old English thoroughbred, which he discovered at the Röttgen stud and who was still racing until October 2020. *

Yesterday the licensing committee of the German Sport Horse Breeding Association visited him on the farm and licensed him. For the time being, the Kurbels stallions will be collected at the nearby Burghof Brodhecker, but in winter a breeding station will also be built on the Kurbels facility. With Agamemdon xx and the Trakehner Sturmpfeil as the first figureheads.

“I had been looking for a thoroughbred for warmblood breeding for a long time,” reports Kurbel. “At the Röttgen stud I actually went to see two other stallions. But then I saw him. "

Agamemdon, a son of the Etzean star sire Lord of England, corresponds exactly to the type of blood he was looking for: large shoulders, well set neck from the withers instead of downwards and overall more uphill than downhill.

“I looked at many pictures of the influential thoroughbreds in riding horse breeding. Ladykiller xx, Der Löwe xx - they were all built that way and not too big. The Irish thoroughbreds, who bred later were bigger 1.70m and a different shape. "

Agamemdon measures 1.63 meters. And it is also beautiful, stresses Kurbel. “They took him out and I immediately said I wanted him. I didn’t even know what it cost. ”And also not how he moves and whether he can jump. But in this case, the promise was delivered, emphasizes Kurbel.

“He has a walk of 9.5, jumps very well and, above all, carefull and is very promising under the saddle.” In the coming year he should perhaps take a couple of A class jumping and cross-country tests. “But we’re not in a hurry,” said Kurbel.

Number two in Kurbel’s stallion line-up is the now four-year-old Trakehner Sturmpfeil by. Under Fire Sixtus. The stallion was licensed in Neumünster in 2019 and will be presented this year by Philipp Brodhecker in the first young horse competitions.

But Kurbel also sees his future in the sport. “He should go to Sophie Leube in winter and then maybe at the Bundeschampionat when he is five and six years old.”

Thank you. I couldn’t recall a GB TB of that name but looking at the pedigree he is predominantly German TB.

UK TB breeders are liking German bred at the moment for their robust physique and soundness. And outcrosses

I’m excited to see this breeding. I have 2 fillies by Musketier, so some very similar bloodlines.