The organizers of this HT deserve major kudos!, and it would be wonderful if more organizers were to follow suit; competitors (myself included) are notoriously bad about filling out evaluations, even online - we should all be doing this on the regular instead of complaining.

The week after the Horse Trial, they sent an email (below) to all competitors with an apology for the dressage footing and a solicitation for feedback; I thanked them profusely and provided detailed feedback (positive and negative) via the email link they provided, to which they responded with kind appreciation for my input. Very classy on their part

I will be back next year - and it will be interesting to see whether any changes/improvements are made; I absolutely love this venue and will enter regardless, but this action on their part made me feel all warm and fuzzy towards them.

(I added a pic of my mare and me over their 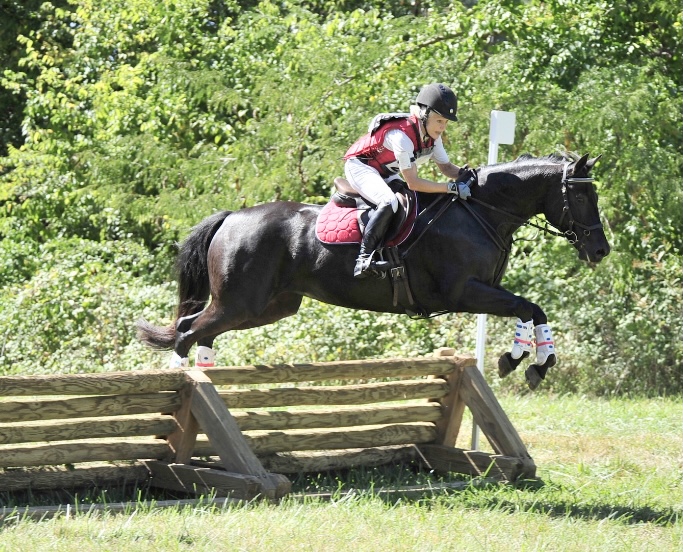 LETTER FROM THE ORGANIZERS.

Thank you for coming to Old Tavern Horse trials this past weekend. We hope your weekend was a successful one.

This is the first time Five Rings Eventing has run a national horse trial and the first time the Intermediate level has been run on the Fleming Hill property. The purpose of this email is twofold.

First we would like any and all feedback – both positive and negative – on all aspects of the Horse trial – from administrative issues to scoring to the quality of the various disciplines as constructive feedback will be useful and help us to continue to improve this event.

Second, we also wanted to comment on the dressage footing that deteriorated so quickly over the weekend. We apologize as we did not see this coming at all before the event. Though we had several inches of rain on Tuesday when we set the dressage rings up, on Thursday the ground felt good to us humans!

We were very surprised that the horses punched through the upper crust and underneath held a lot of moisture. We have held dressage there several times before and never had this issue. We are planning for other options in case of a similar rain pattern for future events.

Footing is one of our highest priorities at the events that we run at Great Meadow so we were caught unaware, and we wanted to make sure that you know that we realize the situation and will do everything that we can to make sure that doesn’t happen in the future.

Again, thank you for coming and we hope to see you next year.

Off topic a little - but what a beautiful mare! Is she by Escudo? I thought I remembered you had a mare by him and she looks a lot like him.

@SusanO - thank you, and YES! That’s my Ella, she is her sire’s spitting image

It is so close to me now that I am hoping to go next year with my young guy. Youre not the first person Ive heard that said it was a really good experience. I was bummed I wasn’t able to go but I am excited about it for next year.

What a beautiful photo.

Very classy of them to email apologizing about the footing… but IMHO unnecessary. Anyone have any photos or videos of dressage, assuming it was on grass?

Do eventers expect not to have to ride in mud?

Indeed - very classy of them

They clearly care about the competitors - huge hats off!

As for the footing, well…The mud (especially in the tracks down the long sides, short sides, and corners - which is to be expected) was SO deep that the horses were floundering, they just couldn’t pick their feet up. My mare felt LAME, with a stilted, hobbling gait; I was afraid she would strain a tendon - no way to get her “forward.” Worst I’ve EVER ridden in, by far! In some places, the mud must have been 9-12 inches deep - and this was after it had dried out a bit! To their credit, they moved the rings between Saturday and Sunday (I rode Sunday), but the tracks quickly deteriorated and the later rides had the worst footing.

The warmup area was fine, so the rain had apparently penetrated deep into the footing - when the horses punched through going over the same track repeatedly (we were all using studs, presumably), it turned the soil into mush, with a little “red clay chaser”. It felt like riding in chunky peanut butter.

As I rode around past the judge I got a closer look at the ring footing, and

, I mentioned it to the judge - she said “yes, the footing is awful!, but everyone has to ride in it”, to which I said: “yes, a level playing field!” I thought I would get dinged on forward, but she was very generous and gave me a 27.

Luckily for me, my mare is good in all footing conditions (wet or dry) - but I do ride her on all types of footing (even though I’m a footing Nazi, they have to learn to adjust to soft and hard ground - I do a TON of walking, especially when the ground is hard), so she had no issues, and the x-country course had some soft spots, but she is a good “mudder.” It’s different galloping around the x-country in muddy conditions because the horse has some “way on”, you’re not “stuck” with every stride because you are moving fast, and you can be judicious: avoiding the deeper areas by adjusting your line a bit so as not to ride directly in the tracks of previous horses, making sure you have impulsion on approach but also sitting up and balancing to the base when possible, etc.

As I rode around past the judge I got a closer look at the ring footing, and

, I mentioned it to the judge - she said “yes, the footing is awful!, but everyone has to ride in it”, to which I said: “yes, a level playing field!” I thought I would get dinged on forward, but she was very generous and gave me a 27.

I used to joke that it was best I go dressage in mud – it put my common-mover in the same playing field as the much better moving WBs. I got one of my best tests on that horse in mud that was about four inches deep. I actually thought the mud gave us an advantage in that it made my keen-for-XC horse so much more attentive to my aids.

The boggy grass in dressage was a bummer. While I agree, no apology necessary, I think it’s classy for the organizers to acknowledge that it was less than perfect and express their goal to improve it for next time. We had a great experience at OT; I hope they stick around (again) for the long term!

I appreciated the note.

While I agree nobody expects perfection in grass dressage footing, this held up surprisingly badly. I went 4 hours in on Saturday and it was destroyed–my horse would barely move in it.

There are a lot of Fall events in Area 2, and I suspect that the message that they are planning to improve upon this for next year will help them retain competitors. The jumping phases were really nice.

I appreciated the note.

While I agree nobody expects perfection in grass dressage footing, this held up surprisingly badly. I went 4 hours in on Saturday and it was destroyed–my horse would barely move in it.

There are a lot of Fall events in Area 2, and I suspect that the message that they are planning to improve upon this for next year will help them retain competitors. The jumping phases were really nice.