Edited: I am looking for racing photos of a horse I just saved from slaughter. I am almost 90% positive it is him but cannot find any pictures. His descriptions matches the jockey club and since his tattoo is barely legible I cant confirm without photos.

His name is Mr Sonata and he raced in the Midwest. I’ve contacted Arlington to see but was wondering if anyone else had connections or the ability to find the winners circle photos. He has the body of a 15 year old but the teeth of a 20 year old so I am perplexed by him.

Goodness. It’s Mr Sonata was trying to get this going!

I can’t turn up a “No Sonata” at all on equibase. Can you link to his race record there?

I just looked for No Sonata on equibase and it returned no results.

Depending on exactly when and where he raced in the Midwest he could’ve run at Arlington, might’ve made it to Indiana and could’ve run at Hoosier Park back when they still held TB and Standardbred races. Also possible if he was running in '03 or '04 that he was running at what’s now Indiana Grand way back when they first opened and were called Indiana Downs (the track has changed names a couple times over the years - started as Indiana Downs if I remember right, then changed hands and became Indiana Live briefly in the late '00s I think, and then changed hands again and has been Indiana Grand since).

I worked, for one season, as barn security (patrolled the barns on foot watching for anything that looked off and gathered horse in today signs, nothing glamorous, haha) at Indiana Grand about three years ago. I wouldn’t have any direct contacts there anymore, but if he raced there or trained with anyone who raced there at all, I could probably at least tell you whether I’ve heard of the trainer, which, okay, probably won’t be much use, but. I know the woman who trained my OTTB kept pretty much all her winner’s circles photos from her training career, I remember walking through her row of stalls one time and the office door was open and the walls were COVERED in winner’s circle photos.

I asked the…I don’t actually know what his job title was assuming he had one, but I’d say basically barn manager, if they had a winner’s circle photo of my horse by chance (he raced 9 times, won his first 3 all in a row and then just, I dunno, decided he didn’t want to be a racehorse, I guess, haha), told them what my horse’s jockey club name was, that I had him for a few years and he died from colic, showed them one of the photos I still have handy of him. Guy and trainer both looked at the photo and were like, “that’s him” when they saw the horse on my phone and took the time to look for one of his win photos - my OTTB had been dead since 2013 and last raced in 2008 and this was around 2018.

Okay I can’t find a No Sonata on either pedigree query or equineline. I tried searching a few variants of the spelling, etc. on pedigree query. I know this is probably a long shot since you can’t read the tattoo but have you been able to look up the pedigree at all and can you link to it or give us a dam’s name and year of birth? (or approximate year - I’m willing to search the dam’s name and a few possible years)

If you don’t have that, is it possible you or someone else misheard the name at some point? I remember the people I first got my OTTB (the one who died in 2013) from thought his racing name might’ve been “Laddie Go.” Looked up his tattoo (which was fortunately very clear). Nope. (It sounded similar, like I could see if someone misheard his racing name and then someone else mumbled or something you could come up w/something like Laddie Go from his real registered name.)

Coady shoots Arlington & Churchill now, not sure if they did back then, but it’s easy enough to send them an email to check. I’ve always found them responsive.

These guys do Hawthorne: http://www.fourfootedfotos.com/

Send them an email, too.

In communications, be sure to give them the track, date, race number & name of the horse.

If they didn’t cover those tracks that long ago, call the track and ask who did, and how you might get in touch.

He’d be 24 this year, raced at Churchill, Arlington, Hawthorne, Gulfstream and some track I’ve never heard of called Sportman’s.

Yes I think that’s him. 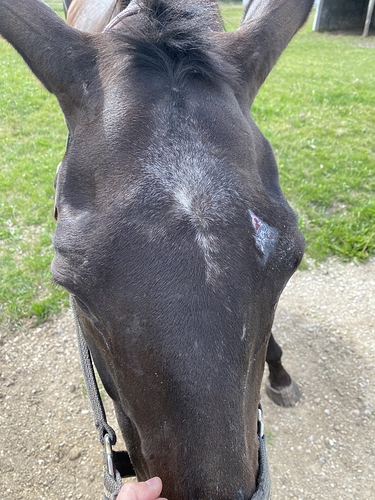 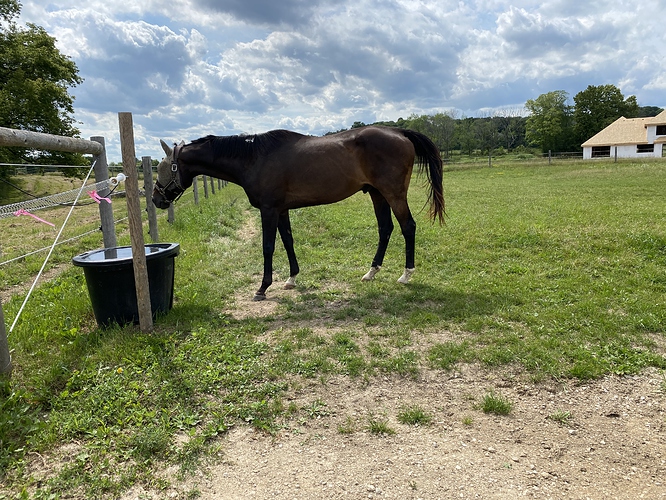 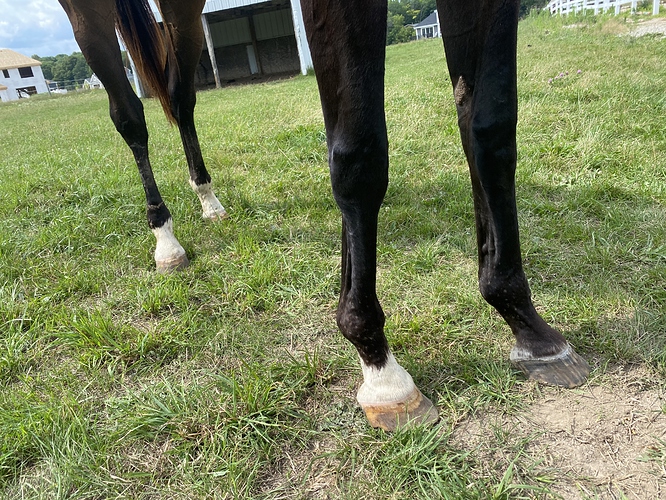 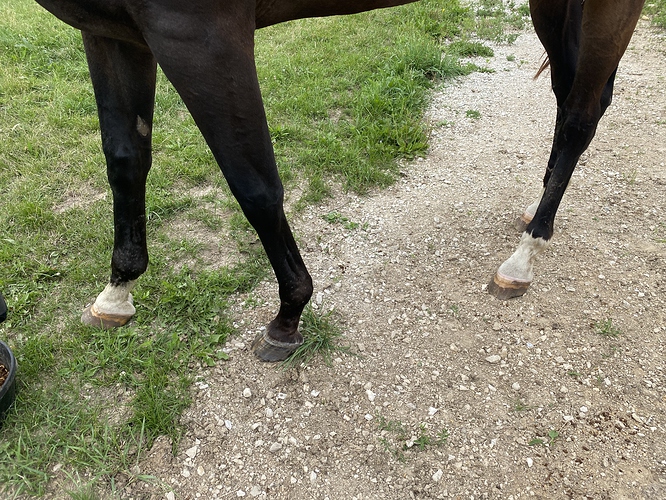 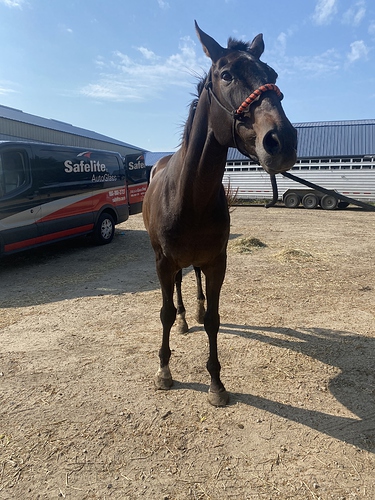 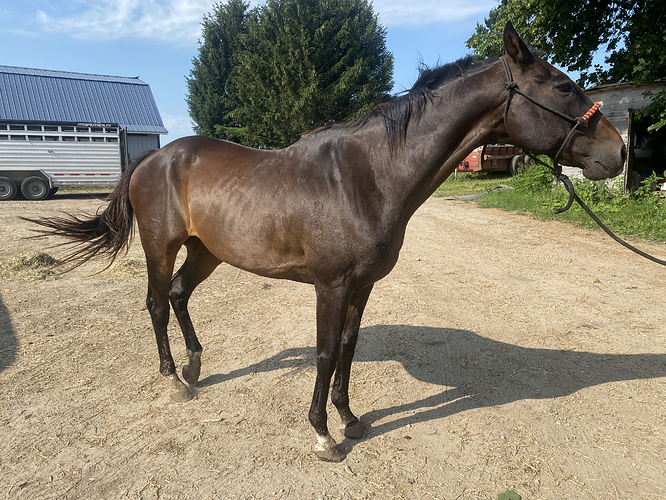 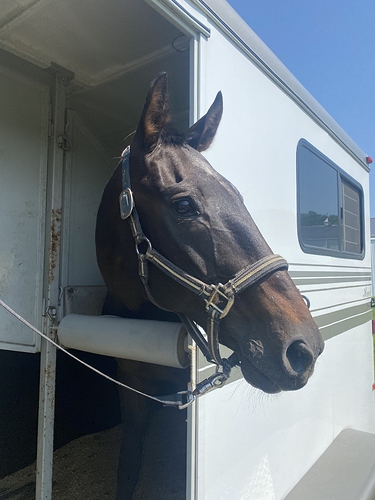 I’m going to see, very quickly, if I can take the tat pic into photoshop and play with contrast and see if I can’t make out something but it’s probably going to be impossible. Just curious. 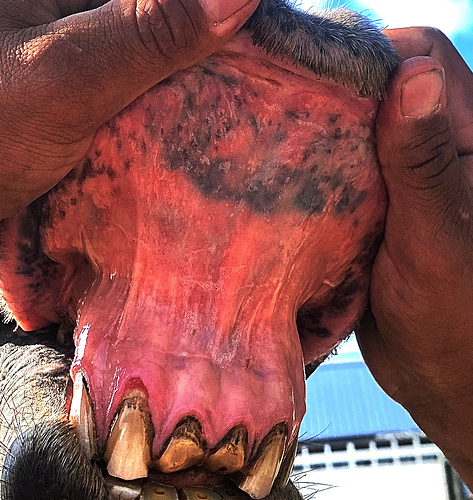 Alright so I cropped it and cranked the contrast all the way to 100 in photoshop and toned the brightness down. still really hard to read but I want to believe I can clearly make out a 2 and a 6. But that might be wishful thinking. (Also yes I realize the gum color looks utterly horrifying now that it’s been photoshopped within an inch of its life)

EDIT: The more I look at this I’m pretty sure the one digit is most likely a 2.

Sportsman’s Park was in Chicago.

That’s some tough ink. The markings match? Not sure how much a win photo will help–they are usually wearing a hood, and low white is often obscured by the footing or by mud.

I’ve spent hours trying different combinations but always see 26
This is his description if it’s him.

That sounds pretty close from what I can see of his markings.

They don’t always have a hood/blinkers (though yeah a lot do - my guy in his one win photo I have didn’t) but yeah, the white markings on the legs will often be covered by mud/dust/footing.

I’d say if the markings match that’s probably him, not sure if there’d be a way to confirm past the tattoo number, I’m thinking if he was foaled in '97 that’d be either a bit before DNA samples were used and/or old enough I doubt there’d be a DNA sample anywhere to compare.

EDIT: Also, win photos tend to be taken from the side view if they’re crossing the finish line so you won’t really be able to see their face. And camera quality in the late '90s/early '00s wasn’t great (at least for digital cameras - though I’d bet a lot of pro photographers were still using film then) so the face markings might be hard to spot in a race photo even w/o blinkers depending on distance from camera, etc.

He is so sweet and an old soul. A bit sore but not unsound, he’s still in quarantine so I can’t see what he knows but he looks fit. Was told someone called the kill pen that there was one to pick up on Ohio when he was in the area

That’s sad - that said for a horse from a kill pen he looks like he’s generally in good shape - not visibly neglected or anything. His two top front teeth look a bit funky, like really worn or caved/pushed in, don’t know that I’ve seen that before (not judging just noting I’ve not seen that) but then I don’t have a horse at the moment and don’t generally have cause to look at the teeth of the horses I am around, so, yeah.

EDIT: Good luck with him and hope you successfully ID him!

Thanks for the feedback…they were selling in as 8

I knew he was older but not that old. These people were shady. He will be taken care of though and have a nice home.