I have a chance to buy some pristine 1st cut orchard/rye hay and they will deliver/stack.

I have done some reading and it’s not encouraging, as my horses (TWH’s) are 26 & 27, easy keepers, one is IR/Cushings and has already seriously foundered.

The fella who grows this hay tells me he has six show TWH’s who stay in the barn most of the timeand have never foundered on this hay.

I am asking for COTH thoughts please, as part of me is saying I’d better pass on this hay, after doing some on-line research. DH is bringing two sample bales home tonight to see if the horses will even eat it.

They have always eaten orchard/timothy mix, which I can still buy but it’s a $1.50/bale more, we have to go after it, and then pay someone to stack it —— that’s what happens when one hits their 70’s:(

Anyway thoughts as to whether or not I should say “thanks but no thanks” regarding safety for an insulin resistant horse. TIA:)

You dont really know without testing.

I personally wouIdn’t feed it. I have insulin resistant horses and have tested many, many loads of hay over the past 12+ years. My experience and testing has shown orchard, and especially rye, to be too high in carbs.

Of course, that’s just my experience with hay that is grown in eastern WA. You’re hay might be okay but you won’t know without testing and without testing I wouldn’t take the chance.

Since they are used to eating the Orchard and do fine how does Rye differ from Timothy?

A lot of horses do not like the rye besides the possibility of being high sugar hay. Mine ( the pickiest animals in the world) will not eat OG hay if there is rye in it. But now that I have said that - I got a big bale of OG hay that had some rye seedheads that they actually liked. I think it was because the rye was not very mature like I see in so much hay with rye in it and there was not a lot in the hay. My horses are not the only ones that do not like it - several other people I know say the same thing too.

It is good you are getting two bales to test.

@candyappy rye is a grain hay, timothy is a grass hay. Rye is established to be high in fructans.

@Scribbler and @Garythesquirrel I already have my E-A form filled out & the check written; wait 'til DH gets home with the two sample bales of hay and I ask him to hook the corer up to the drill and get me a sample, lollollol

@SusanO Thank you:) I keep hearing this as well - that a lot of horses don’t like rye hay. The Seller of this hay claims his stalled show horses and his stallion eat it very well. I guess they would, if that’s their only choice, lol. Still-in-all, the hay is supposed to be “pristine”, so I’ll see in a few hours if it really is. My idea of pristine is there hadn’t better be a smidgen of weeds to be found nor do I want to see cut up soda cans baled from the edges of the field:)

The guy only has 200 bales left from the 2,000 he set aside to sell but I was already concerned when he said “rye”. The orchard/timothy/mix I have been buying for the last few years consistently tests in the 8% range for NSC value. Anything too much more than that is going to be unacceptable as my foundered horse teeters on the edge as it is. He can’t even have steroid injections for his arthritis due to laminitis concerns. I have money saved to try PRP Therapy as soon as the temps cool down.

If the guy sells the hay before I get my test results back, so be it, I will just go back to the other Seller and pay the really big dollars for hay I know is going to test low in NSC.

To whine for 20 seconds — I could probably have a winning, Lower Level Dressage horse, with two years of lessons to learn how to ride Dressage, for the money I have tied up in my first metabolic horse and now this 26 year old beloved-broke-to-death-go-anywhere-swim-rivers trail horse who blows in my ear better than anyone, when I come in the barn every morning.

Long as he wants to keep going, I will keep spending my retirement money and thank DH for still wanting to work because he is hyper and can’t be still, lol

@SusanO wellll - they both dove into this hay. I wasn’t prepared for such enthusiasm so it worries me. They only get hay when they come in at night and this hay is only ~25% of their hay rations.

I’ve got the samples bagged and ready to mail to E-A tomorrow (Friday). Monday’s a holiday but I should still have results back by the end of next week.

I have to dig out my previous hay analysis. It will be interesting to see how the analyses compare.

I will say, this Seller is not blowing smoke. I can’t find one weed or foreign object in the hay and it smells good. The horses like it almost too much, so all that remains is test results.

I also ordered the nitrate test because I am not used to dealing with rye hay. It may have been a waste of $11 but my horses are retired trail horses; nowadays, work to them is walking up to the barn in the hot sun for water, then going in the barn, in front of their fans.

I can’t speak to feeding rye to an IR horse but my horses have always loved rye hay. My yearling will eat rye hay from her haynet while leaving the free choice orchard sitting in the bin. Sounds like your horses approved. Fingers crossed that your test results come back with acceptable values.

My horses love rye hay. It is high in sugar so they eat it like candy. I soak it or steam it if I have one who needs a bit less sugar.

We have one horse who has tested being allergic to rye. Because of his needs we feed Teff hay which is not commonly available here but the feed store does bring it in for us and few others.

but speaking of being retire in the mid 70s that is the same for me… my daughter found a not so local feed store who will deliver to us (its 50 miles away) …the driver will unload the feed, shaving, pellets, and hay putting everything just where it supposed to go… $20 delivery fee. Of course we tip the delivery man greatly

We did get some hay that had foreign stuff in it (appeared to have been insulation from a storm damaged building?) … just mention the issue to the store, without question they asked how many bales where affected…and how many do you still have that you think maybe? … three hours later the driver arrived with the replacement hay and picked up the questionable hay)

My experience and testing has shown orchard, and especially rye, to be too high in carbs.

What cutting(s) have you tested?

All 2nd cutting OG I have seen (clearly, this isn’t all, but it’s a lot) has been REALLY low in ESC + starch, like combined less than 8%, and starch less than 2%, almost always less than 15% WSC and many of them 10% or less, while having a nice protein level (low double digits), with good ADF and NDF

I don’t remember which cutting the hays were from, it’s been well over 10 years. The hay was from Washington state. I’ve been feeding strictly teff hay for the past five years and have been very happy with it.

Is rye hay rye grass, or is it immature rye wheat? I think these are two different things?

The rye hay I’ve seen has been rye grass.

@clanter. I didn’t even think about rye allergies - blah:(. What were your horse’s symptoms?

You are so fortunate to have such a sweet deal with your hay!:). This getting old business sure does stink for anyone who never was a couch potato​:exploding_head:

@Scribbler I didn’t ask but I think this is rye grass. I could be wrong since I’ve never dealt with rye anything in the past.

My hay sample is ready to leave town and I have my tracking number. This is first cut and really nice looking and great smelling hay. Even if the test results do come back well within the safe range for my IR/Cushings fella, I’m still not sure I want to buy up a more than 50-75 bales to mix into the hay I already have — I’m trying to finish buying what I need to get thru until next spring. I really didn’t like the way my horses nose-dived into the small amount they were fed last night and left the orchard/mix they usually clean up. Every time I don’t listen to my gut, I pay for it, lol

I didn’t even think about rye allergies - blah:(. What were your horse’s symptoms?

Do not know what the reaction to rye would be. We tested him for allergies twice, once by our vet then took him to Texas A&M for testing… the list of items the lad is allergic to is about thirty items …rye grass is in the list both times.

He is on medication and watched closely… if he was not such a good horse he would be one heck of problem …special diet, turn out at night in full fly sheet

At least here we do not have rye in the pastures so not an issue for us. Did have problems finding Teff hay as it is not commonly available here but the place daughter found has jumped to hoops to make sure she has it (and brings in the special bedding he needs)

Ok, for anyone interested in the test results, for the orchard/rye hay, performed by Equi-Analytcial:

It’s a no go for me as the NSC is a tad over 15%. I really hate passing up hay that’s $1.50/bale cheaper AND they would deliver/stack but I haven’t poured $$$$ into my IR/Cushings horse to risk feeding him this hay.

If I had no other choice but to buy this hay, I would have to soak it — I have done enough of that in the past to know it is not happening, if I have other options.

Little wonder my horses dove into the test hay, lollol. 15% NSC for them is like putting the sugar bowl in front of them, lol

It is also about 2% higher in protein. The iron content is identical to the orchard/mix I buy from a different farm in the same county, which is good to know.

I have a copy of the results ready to upload but I am not seeing the prompt to do that.

what’s the breakdown of WSC, ESC, and starch? ESC and starch is more important than NSC. You want 10% or less, with starch 4% or less

I have a copy of the results ready to upload but I am not seeing the prompt to do that.

When you’re in Reply mode, the options at the top have an Up Arrow to the left of the bulleting/numbering formatting options 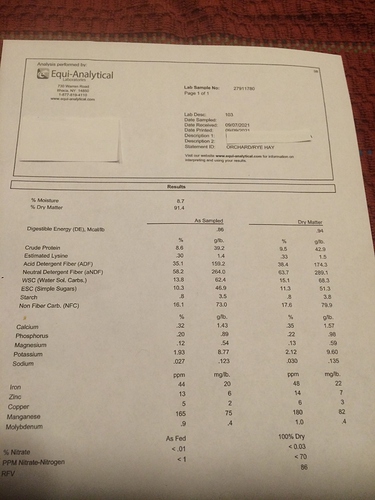