A friend who raises goats had a nanny reject a kid a few days ago. The kid is now five days old.

Last night my friend got called out of town abruptly and I’ve since been kid-sitting this five day old goat - it’s also my first ever goat experience. She’s on Manna-pro kid replacement formula.

I’ve seen conflicting views of how much total ounces she “should” be eating in a day, which seems to be more than this little goat is taking in. She doesn’t want more than about two-three ounces per feeding, four or five times a day.

Her poop is that mustardy-yellow of human baby poop, sorta liquidy, in that a bit will dribble down her leg/under her tail. It seemed to irritate her bottom. Should I give her some Pedialyte for the next feeding round? Am I feeding too much? Or is this normal baby goat action?

I appreciate the wise words of people on COTH. The goat seems reasonably happy and healthy, other than the sorta liquidy pooh…I don’t want to bother my friend with these questions at this time.

well, one goat overtime (a short time) turns into 2, then 4 which grows to well over 20

Here is a basic guide to bottle feeding a goat

and I believe the goats have more clothes than the horses 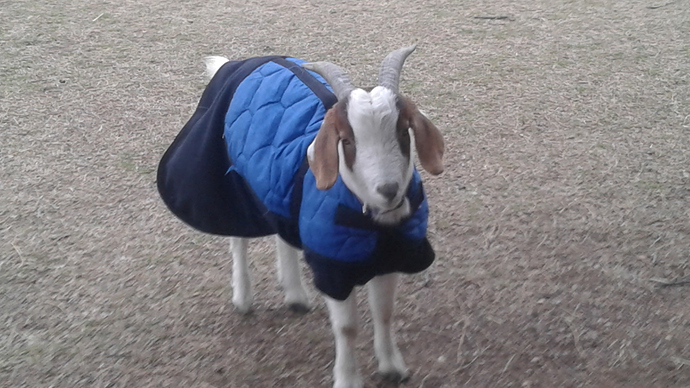 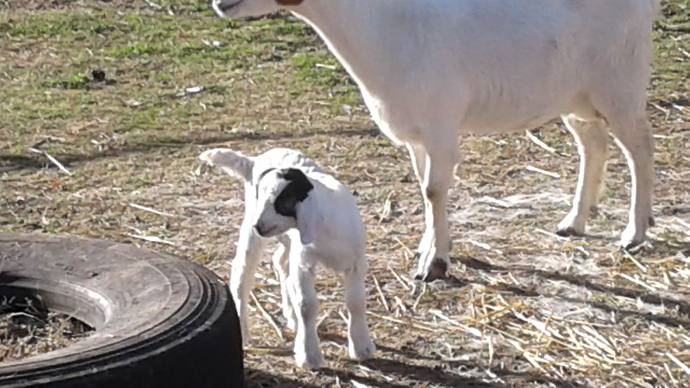 Thanks, clanter.
According to this Iowa Extension Office sheet you linked for me, she should be getting 32-40 ounces of milk replacer. Yikes! Definitely not overfeeding her…

I’m afraid all my bottle babies have been lambs not kids, so I’m not much help. That being said, if a bottle lamb’s appetite is poor I think there are a few likely reasons 1. Hates the milk replacer or possibly it’s bad / off or the bottle / nipple 2. Tummy upset (plain yogurt helps in lambs) 3. Needs more attention (babies get depressed sometimes) 4. It’s dying

Does she want her bottle but then loses interest early? If so you can try warming it or cooling it to see if she likes a different temp; I always warmed bottles for lambs even though a lot of people don’t.

I wouldn’t worry too much about her not eating a lot; better to keep it light then for her to bloat. Bloat is my worst nightmare on a baby. Small amounts as often as you can, every two hours, is what I would do. Bottle held upright so her neck is stretched up and watch for air bubbles in the bottle so you know she’s not inhaling; don’t let the level tip so that she’s sucking air ever. Also as much attention, warmth and love that you can give her, they really are like puppies and need that. scritch her little back and tail head when she eats, mama’s nibble on them and I think they like the attention.

The poo sounds about right for this age and stage but I’d watch it closely. Thin pudding is ok-ish but runny is going the wrong way. You can put some desitin/vaseline on her skin where it’s scalding.

I wouldn’t substitute any milk replacer with anything else just yet; she needs what the replacer has to offer. I’ve fed cow’s milk to bum lambs with success but this isn’t your goatie to make the call on so I’d stick with what the owner does. Have raised scores of bums on replacer too.

Did she get colostrum I hope… if not, she could tank at any time but hopefully she was given some from her cranky mama. Sometimes the mama knows something is off so do the best you can but ready for issues.

Fias Co Farms has a ton of info but cross reference and apply grains of salt as needed. https://fiascofarm.com/goats/feeding.htm#kid

Good luck-there is nothing cuter but they can be fragile little turds!

I will see if older daughter can respond to you, she has raised a herd of baby goats 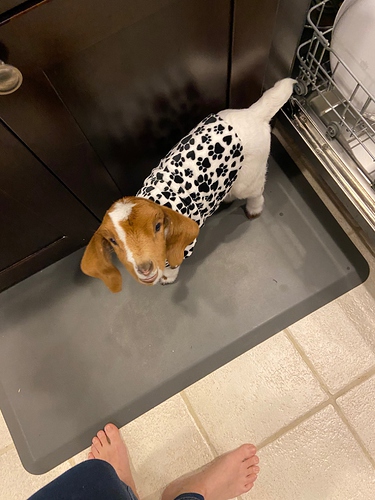 her daughters make each an outfit

My orphan lambs ate better when I switched to a human baby bottle. How long are you kid sitting? I just bought a cheap three pack from the store. The nipple shape was easier for them.

I also cut the hole in the red feed store type nipples to be a little larger, more flow, but you have to be careful adjusting to that, bloat/choke.

I’m just gonna respond to everyone:

Thank you so much!

@clanter, those are some crazy kid clothes!

@lenapesadie and @moonlitoaksranch - She’s using a human baby bottle. I went out this afternoon and got a different nipple, with a faster flow. When I tried that with her, she guzzled six ounces lickety split. I tried to give her another feeding an hour ago and she wasn’t real interested. Acted at first like yes-yes-yes but then just wouldn’t attach.

@OnAMission - That’s good to know about sometimes less is more. Small amounts we can do. I have been trying to keep her neck stretched up and no air bubbles.

I had not been giving her lots of attention other than talking to her and being near, but after y’all’s posts, I did start to rub on her gently, which she seemed to like. I’ll keep that up.

Her owner will be back, I think, on Thursday. The little goat doesn’t seem like she’s sinking, though she’s not brimming over with energy either. When my friend found her five days ago, she was near death - limp and nearly unresponsive. Unknown if she got colostrum. For all she’s been through, I think her present state is okay.

Will report back tomorrow. Thanks again!

What a good update! It’s not uncommon ime for a lamb to eat more one feeding and less the next as you adjust to what they want / need! Def keep up with the pets! Our most recent bottle lamb likes gentle scratches, he does his mouth like a horse would getting a good scratch. Too cute.

Goaty and I had a great day. She ate lustily every two hours. We apparently found a nipple/temperature/volume sweet spot and she’s a happy playful little thing. Her owners are probably coming through tomorrow to pick her up on their way home. I’m almost gonna miss her.

Thanks again for all the information…it really was helpful!

I know she is back with her owner now ( didn’t see this) but 3 things make a huge difference in getting kids to nurse well.

The Nipple used My kids that I need to bottle love these https://www.idealtruevalue.com/store/p/178919-3-Pack-Controlled-Flow-Lamb-Nipples-Clear-Isoprene-With-Soft-Yet-Stron.aspx?feed=Froogle&gclid=CjwKCAjwv-GUBhAzEiwASUMm4oqeEDNoMtdkjj1DXJ15153X_VV1ULt2zPbI2Sjxl0v9w8xwsVJqWhoCFv8QAvD_BwE

The way you restrain them when feeding. I get on my knees , get them backed up into my body so they can’t move backward, hold the bottle in one hand and cradle their jaw area while holding the nipple in.

Sounds more complicated than it is but with newborns they just need more help to get it.

Thanks, @candyappy. She went home about an hour ago. We had good luck with the Dollar Store baby bottle and nipple. And we figured out a good angle for feeding. I should’ve thought to try restraining her as you describe, but it worked out. We did feed every three hours, starting at 6:30 am and ending at about 11pm. She slept happily in her crate and we even figured out when she was likely to pee…so she spent lots of time romping around inside the house while I cleaned the kitchen or read.

If it happens again, I know where to go! Thanks again.

It’s been a while since I’ve fed a bum but when you mentioned how you hold them! I know the stance well, lower legs together as a block and wrap around with the arms. Once they latch on I’ll scritch them and tell them I love them, they’re such sweet little things I think they need to know that. It’s so funny how they want to run backwards away from the bottle but learn to pound in on mama. I miss baby sheep/goats so much, I’m hoping to have more in my future soon.

It’s been a while since I’ve fed a bum but when you mentioned how you hold them! I know the stance well, lower legs together as a block and wrap around with the arms. Once they latch on I’ll scritch them and tell them I love them, they’re such sweet little things I think they need to know that. It’s so funny how they want to run backwards away from the bottle but learn to pound in on mama. I miss baby sheep/goats so much, I’m hoping to have more in my future soon.

I think they feel more secure kind of cradled like that and it only lasts about 2 weeks and then they come running. I never want to bottle feed but I love my bottle kids when I do!

Glad she did ok @rockymouse . They can be so fragile.