I know this topic has come up before but it looks like some responses might be a few years old so I thought I would post this in case there’s been any new products released since… here goes:

I’m looking for new paddock boots for my daughter. She has wide feet and a high instep so it’s a challenge. Oh, and she prefers zip fronts and hates the laced style. Any suggestions? The high instep makes it a little difficult to get her foot in the boot. I’ve tried sizing up a half size and that helped a little, I just know she’s still pretty uncomfortable. She also tends to get ingrown toenails if the toe box is too narrow. Someone had suggested trying a pair of men’s paddock boots. Does anyone know if those might have a higher instep and wider toe box?

I have similar feet and find Ariat’s products fit me pretty well. But my paddocks are lace-up, and my tall boots are field boots. I need that extra, customizable give that laces provide.

A zip-up paddock is just going to be a harder fit, no matter which brand your daughter chooses. Depending on her age, you can veto her style preferences and get the laces, or get the zips and shrug your shoulders sympathetically when she complains about how hard her new boots are to get on and off.

I must have really wide feet not just wide feet because I find the Ariat boots to not be wide enough.

Me too. I have never found an Ariat I could even get my foot into.

Once upon a time I had paddock boots that had laces up the front (for adjustability) an a zip up the back (for ease of putting on). In this case, I ended up having problems with the zip “falling down” while ridng, but the concept is good. I do not know if anyone is making them nowadays.

I have VERY wide feet, and a moderately high instep. For many tears I have ridden in “Horse Shoes” by Roper. But they are laceup only. They are definitely designed for riding, but they look more like hiking boots than paddock boots.

I have wide feet and a high instep. The ONLY off-the-rack paddock boots that fit are Ariat Heritage RT (Round Toe) lace ups. And the clerk at the Dover Saddlery store can confirm that. And probably hates me, because I don’t like the Ariat boots (don’t like the heel height) and I insisted on trying every single non-Ariat brand they had before I caved and bought the Ariats.

Round toe. The regular Heritage paddock boots come in wide and they’re still not wide enough. The round toe boot in regular width is much wider in the toe box than the regular style in wide width. How does that make sense? It doesn’t, but there you are.

Lace ups. The zip ups are absolutely a no go. I couldn’t even begin to zip them up.

I had to go up a half-size. My foot length is a 7.5 in the Ariat boots, but I had to buy a size 8 to accommodate my instep. 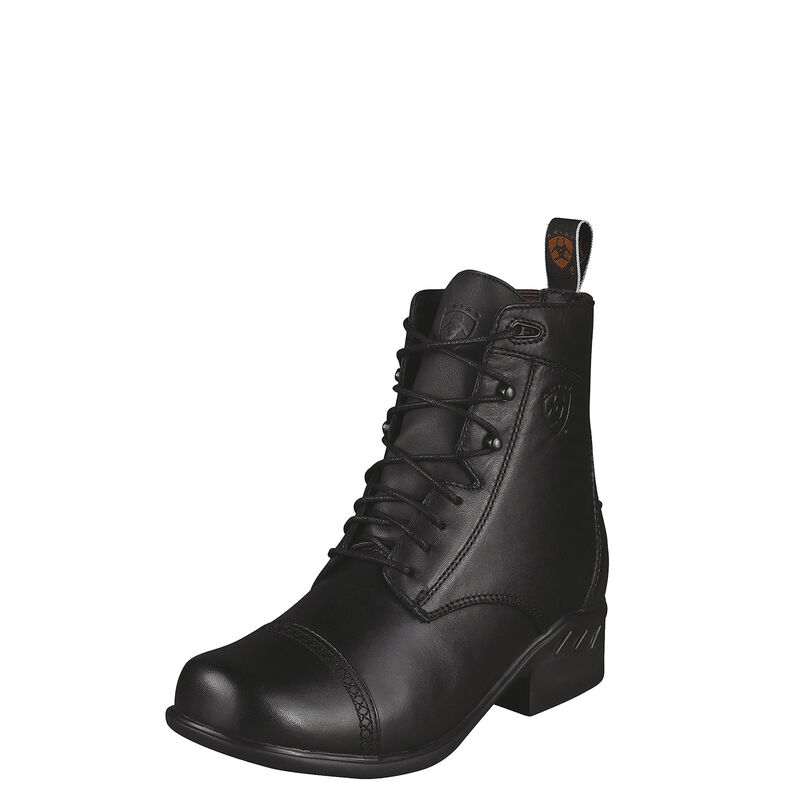 If she is done growing, I’d suggest customs.
My current Dehners are 18yo & though worn infrequently these days, stood up to many years of riding 3-4D/W.
I chose pull-ons because my last pair of zipped paddock boots had to go back to Dehner for replacements after a couple years of arena grit.
At the time, Dehner was the only place that carried the correct length zipper.

As an adult, I’m in the same bucket as your daughter. While I love and practically live in Ariat Terrain boots, I cannot get my high in-step foot into any of their paddocks… or anybody else’s for that matter. I gave up.

Hopefully, someone will have an answer for you!

I have these in the zip and and they are the biggest toe box I could find for my feet. I rip these off as soon as I get off the horse. They are so tight on the top of my foot its painful. I have a higher arch than most, wide toes and narrow heel. They were out of stock on the lace ups and I needed them right them.

So avoid the zipper ones.

I’m much more comfortable in the Ariat Terrains if DD doesn’t have to wear paddock boots. They work fine unless showing.

I have the pull-on Smartpak Chelsea boots and really like them. The soles are a little thicker than standard paddock boots but I don’t find it to be an issue and they are super comfortable. https://www.smartpakequine.com/pt/ada-chelsea-boot-by-smartpak-18125?bvstate=pg:2/ct:r

I have wide feet and a high instep, and I’ve worn the Ariat Barnyard zip-up boots for years. Great arch support, and comfortable to wear all day long. I keep a backup pair in my closet in case they discontinue the model!

I have a wide foot and a high instep. Worse, I prefer BROWN paddocks, godhelpme.

I’ve had several pair of lace-up Ariats. The model with the round toe were better, the model with the pointer toe were AWFUL. I cannot get my foot into their zip up models. Now, the round toes are only made in the Heritage Line (they used to make other models with a rounder toe) and IMO the Heritage line is garbage. The don’t last. They might for a kid that isn’t wearing them 6 days a week for several hours. In all of the Ariat paddocks I have had, and my Ariat tall boots, the outside of my foot starts to hurt after I’ve worn them for a while, particularly while I’m riding. Not helpful.

I have always wanted to try on Suedwind and Mountain Horse Aurora, but have never been anywhere that carries enough of a selection of those brands. Both are supposed to be wider and allow for a higher instep than Ariat. Also still hard to find in brown, but if she wants black, which is more in style than brown but I’m an old fart, that might work for her.

unfortunately she’s only 12… and her foot is already bigger than mine… much to her dismay, she got her dad’s feet… I’m no giant at 5’ 6" but she’s just about the same height too.