Pelhams in the hunter ring

I ride my ottb in a pelham. Do you find judges are biased to them? Would they pick a horse in a snaffle/d-ring over a pelham? If so, what other bits can I try that still gives me leverage but has the more traditional hunter bit look?

I judge for a living. It doesn’t matter what bit you use, it only matters if it shows up weakness in the performance. A horse that goes well in a pelham will place based on performance, manners, and way of going. If the horse bears down or curls in the pelham, or you are using it because he is hard to slow down, that is going to count off. Back in the day, pelhams were actually preferred.

When I showed my OTTB in hunters, I also used a pelham at times. I never had an issue except for once, at a schooling show. I had decent O/F rounds, and the placings were truly head-scratching (like a terrible mover with wrong leads, adding in the lines and not a great jump pinning, but not me with no major mistakes in an Open Hunter division).

I found out after my classes from my friend (also a judge) that this particular judge hated pelhams and refused to place anything using one unless she had no choice.

I am a schooling show judge myself and I have no problem at all with any legal bit if the horse goes well in it. For example, some of the ponies get put in Kimberwickes for their little riders - personally I don’t like them, but I understand the need for safety when you have a 50-pound kid whose legs don’t reach down very far and needs brakes!

As for other bits with leverage, I can’t think of anything with true leverage that’s legal in the hunter ring other than the pelham. No elevators or gags. Not sure where you are located, but in Canada we can use bits with hooks (like the Mylars) which would add some poll pressure that might be similar.

. Not sure where you are located, but in Canada we can use bits with hooks (like the Mylars) which would add some poll pressure that might be similar

In the US, Myler D with hooks is called a “hunter gag” and they are legal, but considered “non conventional.” OP, so long as the horse goes well in it like some other posters have shared, they’re completely legal and acceptable!

In the US, Myler D with hooks is called a “hunter gag” and they are legal, but considered “non conventional.”

Thanks! Funny enough, in Canada they’re actually written into our rulebook as a legal bit so no worries about unconventional.

Put in a nice round the judge will pin you accordingly! This is my horse……he goes in a Pelham, he places in the high ribbons a lot if I ride well……if I don’t ride well, it wouldn’t matter what bit he had in! 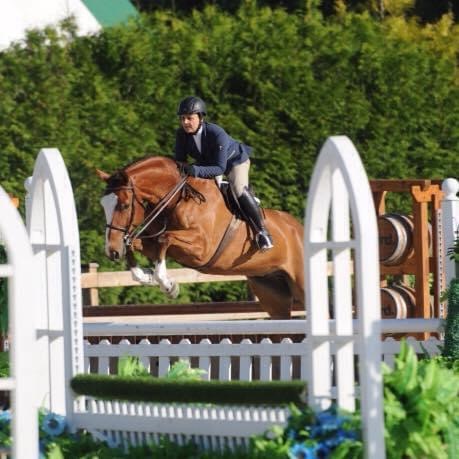 I’m not a hunter rider and won the only under saddle class on my life on a horse in a Pelham. I had no clue what I was doing and there were better moving horses in the ring, too, so I don’t know what was going on… but I do not feel I was punished for the Pelham.

A rider in the International Hunter Derby at Upperville placed 7th and was using a pelham.