What are your recommendations for proud flesh treatment? I’m leaning towards either Proudsoff (my sister’s recommendation), or Equaide (which has fantastic reviews). I won’t use meat tenderizer, so please don’t suggest that or try to change my mind about it. We’ve been using Wonderdust, but thinking we might need to try something else.

I have used Proudsoff with very good success. My vet in Calif. recommended it and showed me how to apply it. She kind of rolled it into a little ball and then smooshed it where it needed to go. You can lightly cover it if necessary to keep it in place. She cautioned me, though, that it will take off healthy tissue, too, so you have to be careful on applying it.

My current vet, here in Arizona, looked at the ingredients and said it was the copper something-something (?) that does the trick. I don’t think it’s sold around here so I had to order it online. Fortunately I don’t need it any more!

IIRC, one or both of those contains bromelain, which is the same thing as meat tenderizer. So if you refuse to use that you might want to just call the vet and have it debrided

how big is the area, and how much pf is there? At some point it’s worth surgical removal

I’ve used Animax/Panalog with great results (but too $$ to use for bigger areas), along with Wonder Dust and Caustic Powder, using those last 2 after applying protective ointment to the healthy flesh.

I have had good luck using Alum powder (the white stuff used in canning).

I’ve always had the best luck with just an OTC steroid cream like hydrocortisone.

Equiade is the bomb. Don’t know about the other, but I had a messy situation on a knee that it cleared up beautifully.

I had really beautiful results having the vet debride the area (slightly larger than a US quarter) and then keeping it wrapped. First wraps were geared towards the primary issue (summer sore) and then shifted to manuka honey and tumeric dressing. It healed beautifully, not so much as a white hair.

The vet work was very affordable. I’d do the same in a heartbeat before monkeying around on my own. YMMV

I swear by Equaide. It knocks out proudflesh without damaging healthy tissue. We use it on wounds all the time in our barn - it dries down to a thick, almost clay like consistency. Keeps wounds clean and covered without bandaging, and seems to heal them quickly.

I still prefer Wonderdust. Success might depend on how you are applying the treatment or the severity of the proud flesh.

Had a mule come to us with a horrific old injury, a huge open sore with proud flesh on a hind leg. Used a product called L-Mesitran (small mesh sheets) with medical grade honey embedded in them. Wrapped with rolled gauze, then Vetwrap, changed every 3-5 days. Took 6 months but what could have been a life-ending injury healed beautifully. L-Mesitran is also available in tubes as a gel. 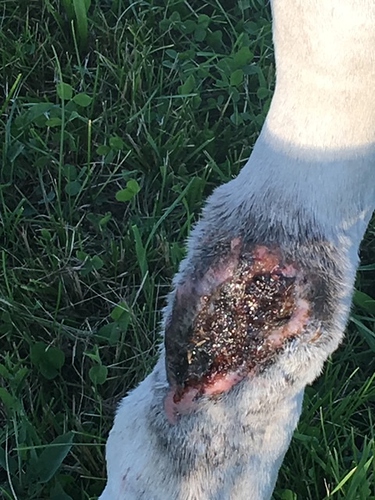 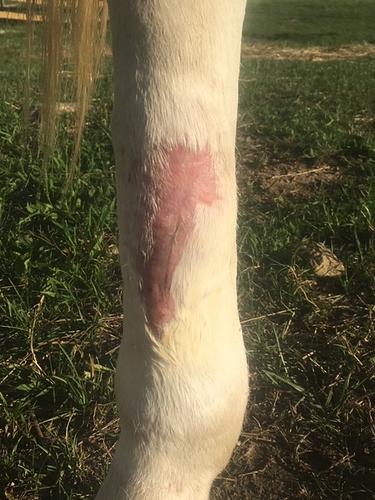 I’ve had the best luck with Derma-Gel

Healing Wounds in Pets and Animals

Derma Gel is a gel designed to promote wound healing in all animal species without requiring bandaging or causing excessive tissue granulation or hair discoloration. It can be used on horses, dogs, cats, livestock, birds, reptiles and exotics.

I had no idea! I (thankfully) haven’t had to deal with proud flesh too often. It just seemed barbaric to put meat tenderizer on a live animal. I’m laid up from surgery, so my sister has been bandaging for me, and she’s been using meat tenderizer. LOL Live and learn, right?

I’ve used Equaide and really like it. It’s water-based and easy to use. It comes with a tiny brush so you can paint it on the wound. If it gets too thick you put a bit of water in and revive it. There is a popsicle stick included for that. I found that when the consistency is right I can shake it and use what is sticking to the top of the jar

I will not use Proudsoff or similar products on a wound because they are copper sulfate. It is caustic and will damage healthy tissue around a wound. It can also damage healing tissue in the wound.

I’m using it now for a cut on the inside of his fetlock. Recently I started using chlorhexidine scrub instead of Betadine. I also found a jar of chlorhexidine cream/ointment. He seemed to be getting sensitive about Betadine. Barn staff had cleaned and cold hosed it before I arrived. I put chlorhexidine cream on it, gauze and padding and then vet wrap. Standing wraps on both legs to protect it when he was outside in his run. 36 hours later it looked really good. I started the Equaide which doesn’t need to be covered. I clean it daily with the scrub but don’t take all of the Equaide off. It flakes off as the wound heals, so I paint on a fresh coat daily.

Adolf’s Meat Tenderizer is for use on horsefly bites on Cape Cod. Excellent product! Available at all the grocery stores. Dampen it a bit and then rub it on the bite. Gets rid of the itching and inflammation. We used it when we were kids. I didn’t know it was for your steaks until I was a grownup. There also was a tremendous market on the Cape for those toilet plungers you pump up and down. They are used for digging steamer clams on the sandy bottom at low tide.