She abruptly came up lame on right front in August. It was soon after a rough tumble off of a rock wall so the prognosis was a sprain - vet did not do x-rays at the time. Since then, she has had bouts of lameness on the right front, attributed to her being an highly-energetic puppy who keeps aggravating the original sprain.

She’s now very lame on her left front. She was sound for about a week and I can’t tell if she’s off on the right front again, too, or if it is just the left at this point. The soonest the vet can see her is in two weeks, so she’s on “stall rest” and short leashed walks only until then.

Rejected by her mom at birth, she was on dog milk replacer for the first three months and has been on Pro Plan grain-free puppy canned food since my mother adopted her at 4 months. (She was one of my fosters so until 4 months, I was feeding her both the Pro Plan canned food and taste of the wild dry puppy food). She gets lots of treats of varying kinds but my mother prefers to feed wet food over dry so no dry foods other than the treats.

Is OCD a possibility? Or is there some other developmental joint disease that would be likely to cause lameness in two legs? And does anyone have any recommendations for changes in diet or general management while we wait for the vet appointment?

Elbow dysplasia is the most common cause of front limb lameness in the young dog, especially of the larger breeds. Elbow dysplasia can take several different forms.

Lyme disease can also cause shifting lameness, but I’d be personally more inclined to suspect something orthopedic at this age with unknown breeding.

Good plan on keeping her on “stall rest,” definitely don’t let her bomb around until you get some answers.

Pano, panosteosis is a growing pains of some puppies, rather common in GSDs.

Panosteitis, sometimes shortened to pano among breeders, is an occasionally seen long bone condition in large breed dogs. It manifests with sudden, unexplained pain and lameness that may shift from leg to leg, usually between 5 and 14 months of age, earning the nickname "growing pains. " Signs such as fever, weight loss, anorexia, and lethargy can also be seen. The cause is unknown, but genetics, stress, infection, metabolism, or an autoimmune component may be factors. It has also bee Panostei...

Panosteitis would be on my list of differentials as well.

First thing I thought of. Never heard of it until my sheltie from a really large bloodline started limping around four months of age. Got to vet and that was the diagnosis. He grew out of it. None of my larger dogs ever had it, thank goodness. Hope your puppy grows out of it very soon.

Every GSD I’ve owned has had pano. All between 5-7 months old. Doesn’t matter what diet, supps etc. I though I escaped with my newest one, but nope…came down with it at 11 months. Breeder said her lines tend to get it later.

The vets all poo poo it, but my original GSD breeder from 30 years ago swore by feeding vitamin c to prevent pano. I’ve had 5 GSDs over the last 30 years and none of them had pano. All received massive doses of vit c while growing. My current bitch is 1.5 yrs and still taking 1000-2000 mg/day.

@jherold I was told this as well and have been giving my pup high doses of ascorbic acid since I brought her home at 9 weeks old. She is 10 month now and knock on wood no lameness or joint issues. I was told to keep her for life on the ascorbic acid and plan to

The vets all poo poo it, but my original GSD breeder from 30 years ago swore by feeding vitamin c to prevent pano.

That’s interesting, my large breed puppy was obsessed with eating rose hips last winter which would have been 5-6 months of age. I freaked out thinking he was trying to eat the burning bush, but it was actually the rose bush. I couldn’t keep him away from them. 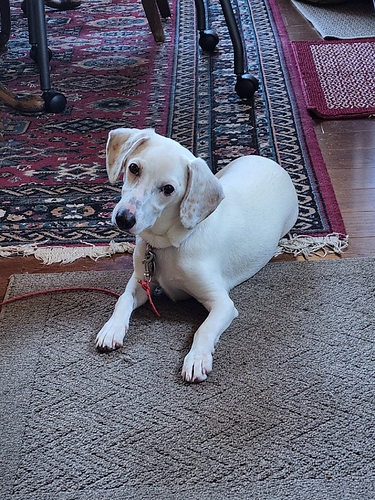 I’ll post an update when we have a diagnosis. Thank you all!

Check for Lymes or anaplasmosis.

Thanks for the suggestions, all! I learned a lot.

She was sound again by last week but we took her to the vet as scheduled anyway. He ruled out pano because she did not have any tenderness in her limbs or joints, and she had already tested negative for Lyme. No x-rays because she currently appears to be perfectly healthy (despite eating a whole corncob last week, which she fortunately puked back so no surgical removal was required).

The vet thinks it’s most likely that she just managed to sprain both front legs - maybe the second leg was partially caused by the increased stress caused by the injury to the first leg. He recommended that we keep her on restricted exercise for a few more weeks to make sure she’s fully healed, but she should be fine.

Anyway, the bottom line is that she’s a healthy, happy pup. 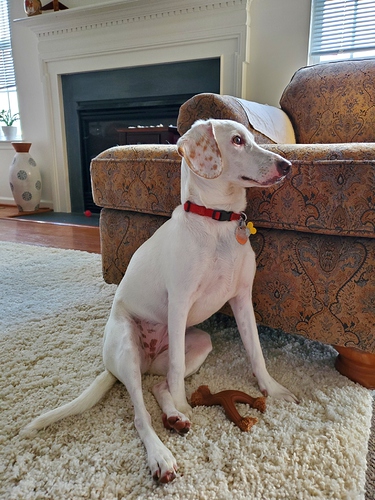