Both are ration balancers. Has anyone fed each of these products, and if so, which one did you like best/see the best results with?

I fed both at points. I used the Enrich Plus more often because it was easier for me to get, and my horses seemed to eat it better than the EK.

I honestly haven’t fed either but I like the look of Tribute Essential K better. Lower NSC, no added iron, added probiotics, and more transparency in the ingredients (soybeans vs “plant protein products”).

“best” is really entirely dependent on your forage, it’s just not a simple comparison.

EK does have no added iron, though it’s still 500ppm intrinsic iron, comparable to many others. Its cu and zn is appreciably higher than Enrich - they recently reformulated things and made the GA a lot closer to Triple Crown at least in terms of mineral profiles (mimicry is the sincerest form of flattery, right?

Just be CAREFUL how much EK you feed. They have been told multiple times, even by outside independent nutritionists, that their 30,000IU/lb of Vit A is too high. And the fact that they recommend feeding 3lb to a lot of horses is pushing toxic territory, depending on the forage.

I would probably not feed EK if you feed a lot of alfalfa (relatively high in Vit A), lots of grass, or lots of nice green grass hay (green = Vit A). At least, not more than 1, maybe 1.5lb.

Thanks so much for the replies! I recently started my mare on Outlast, and thought about switching her ration balancer to the Purina Enrich to stick with same company. The Tribute EK seems to have a lot more ingredients/supplementation than this 14.2 hand Arab mare may not necessarily need…Enrich seems to be a very basic, well tested formula…even if iit’s not a “fixed” formula.

The Tribute EK seems to have a lot more ingredients/supplementation than this 14.2 hand Arab mare may not necessarily need…

if you’re basing that on the GA listed on the website of each, you can’t. Tribute’s is pretty comprehensive, Purina’s is very bare bones, they don’t even list iron for example.

You need to look at the ingredients of both, Purina means looking at a bag, and I’m not sure if their bags have a more complete GA on them or not.

Tribute Essential K does not appear to have toxic levels of Vitamin A. The upper safe limit for Vitamin A is 160,000 IU total so if you feed 3 lbs of Essential K, that is only 90,000 IU of Vitamin A. Obviously you don’t need that much Vitamin A in the summer when the horses are on pasture.

It does risk toxicity if someone decides to feed 6 lbs worth of feed. But if you only feed 1-2 lbs/day, it should be perfectly safe.

oooh my favourite, I have a fun spreadsheet for these types of things. I am a huge fan of Tribute Essential K, just provides so much better quality and better quantity for what you’re paying for. I also am not a fan of Purina at all, their quality control is lacking and their products are cardboard. Never have had good results with Purina.

I do not have this specific Purina product on my spreadsheet, but if you wish to see it, send me a PM.

Tribute Essential K does not appear to have toxic levels of Vitamin A.

feeding 3lb to a lot of horses is pushing toxic territory, depending on the forage.

If it’s a growing horse who is, say, 600lb, eating 6kg DM, then his presumed upper safe limit is only 96,000, and he’s getting 90,000 already in that recommended 3lb, not even taking into account what’s in the hay/grass.

Keep in mind it’s stored in the liver, unlike beta carotene, so grossly over-feeding it could lead to problems. Green alfalfa has a decent amount of A. Grass has lots of A.

It’s simply something people should be aware of. No, feeding 1-2lb for the average adult isn’t a problem.

Essential K, just provides so much better quality and better quantity for what you’re paying for

Tribute is very similar to Triple Crown (thanks to Tributes recent upgraded mineral levels), ProElite, and a few other premium brands I can think of. What makes Tribute better? Just curious, since those are very subjective terms.

Thanks everyone for the input. I’m just wondering…more supplementation is not always necessary or better. I’m wondering what ACTUAL results have been from people who’ve used each of these products.

I had a bag here so I pulled the actual tag off the Enrich Plus. Thought it might be helpful since they are vague on the website. I have been very happy with this feed. If you click it twice it gets bigger. ( i think). 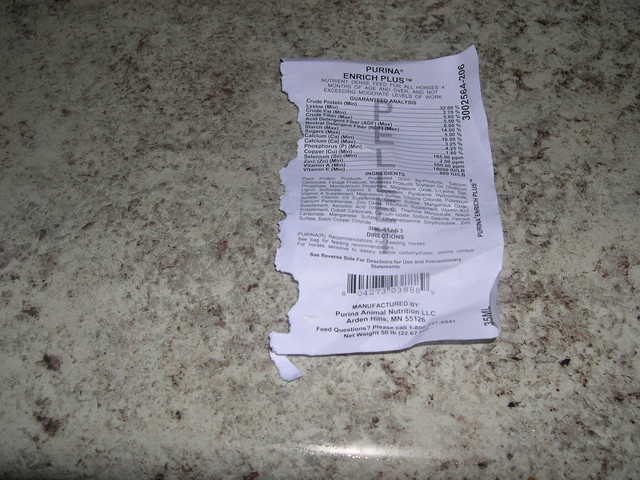 I’m wondering what ACTUAL results have been from people who’ve used each of these products.

Most people who have used them have liked their results, even if they don’t understand there might have been multiple changes they didn’t think about.

Some won’t have been happy with the results, even if they don’t understand there might have been multiple changes they didn’t think about.

If your hay isn’t their hay, then it’s also not a fair comparison.

Without a forage analysis, either one is as good a pick as the other, and the horse has to be the one to tell you if it’s working (well).

I used Essential K years ago for a growing foal into his yearling year, because it was a bit cheaper.
But the lower fortification meant I was feeding a bit more, and that ate up the cost difference. So, I switched to Triple Crown Balancer. That was the only change I made, but obviously the foal was growing. I couldn’t tell any differences. They have only recently increased the fortification and it’s now very, very similar to Triple Crown Balancer and ProElite Grass Advantage.

It’s really too bad Purina still gives such a minimal GA even on the tags. That makes it impossible to make a side by side comparison.

Bumping up this topic…recent opinions, anyone?

Had my Arab and Arab cross at one barn being fed Cool Command, but very little of it. They were both on good hay and pasture, and were in good condition. I moved the retired one to the family farm and the show one to a very good boarding barn on August 1. I hadn’t paid much attention to the whole idea of a ration balancer but since the boarding barn fed it, I decided to put the retired one on it too because it sounded perfect for him. So, both on Enrich Plus since August. Both have held their condition beautifully. No complaints!!

Bumping up this topic…recent opinions, anyone?

What, exactly, are you looking for? These ration balancers have been around a pretty long time. Each will work for a lot of horses, both will not be a good fit for a lot of horses, . Their nutritional profile is a bit different, which makes 1 more suitable than the other for certain forages but if you don’t have a forage analysis, or a general idea of what forage is like in your area, it’s a toss-up.

They work for some, they don’t work for others. I’m not sure what you really want - a tally on how many people decide to chime in with their experience?

It doesn’t matter what works best for me, if my horses, my forage, my horses’ genetics, my horses’ work loads, my climate, aren’t exactly like yours.

If you’re (still?) trying to decide which one to use, just pick one and try it for 6 months.

JB, thanks for your numerous replies…but yes, I was looking for more opinions from different people…people who had not already replied to this thread…and people who.had actually used the products. Oldernewbie, thanks for your reply!

I have fed Purina for years and have been happy with it (though its Purina Canada so they are quite different than the US version).

I recently picked up my newly weaned foal and they have been feeding him Essential K and have switched all of their ponies over to Tribute products and they just rave about them. So about a month ago I made the switch to Essential K and Kalm N Ezsy. So far I’ve been happy with Tribute and ponies have all adjusted well to it. The only thing I have had to add to my weanlings diet is some fat (as the fat content is low in Essential K) as he dropped some weight after being weaned so I’ve added Athlete from Purina and some Smart Earth Oil and his weight has picked up.

I must say the Essential K smells wonderful and my ponies all have a great shine on it. My ponies ages range from weanling up to 25 years old, so a large range. I only need to feed a handful of Essential K to my older ponies. I give about 1lb to my weanling 2 x a day (expected to finish in the 15h range), along with 1/2 lb of kalm n ezsy, 1/2lb of athlete and 1/2 cup of oil. I’m very happy with their product. I also can feed less of it and so far their weights have all kept up and the weanling has gained some weight back for sure.

I have not used Purina Enrich. I have fed 2 cups EK to both of my easy keeper geldings ages 12 & 20 for several years. They eat it without issue. Vet had me feeding 4 cups per day for a while to one of them for additional protein but we have leveled back off to 2 cups (1 AM and 1 PM). They get good hay and the younger one gets pasture in season. I have been happy with the EK. Tribute is easy to get in my areas (south central WI) and also an affordable good quality product. I have used a few other Purina products here and there- Super Sport and Outlast- and I feel like their quality has improved quite a bit over the years. Depending on horse age, price, availability, etc. I think either would fine. They are ration balancers and I always think of it like One a Day or Centrum? Sort of a horse a piece lol.

I’ve fed Enrich Plus in the past (many years ago), and my current horse has eaten Essential K (a few years ago). I also fed Triple Crown’s balancer many years ago, and current horse was eating ProElite Grass Advantage for the past year up until September when my barn switched to self-care and I changed his feeding program.

I honestly don’t remember much difference between any of the balancers in terms of how the horses did on them. I’ve been blessed with easy keepers and my feeding program is based on forage. I do tend to lean towards Triple Crown products myself. When my current BO was feeding, she used ProElite, which is right up there with TC (maybe even better?) It’s tougher to get around here though, and since Tractor Supply and our local feed store both have TC, I stick with that.

All this to say, I don’t think it makes a huge difference. But if you want to know what works best for your horse with your forage, try plugging it all into FeedXL to see. I use that site all of the time when I’m tweaking my guy’s feed.