The quote from Ramsey is mind numbing.

Ramsey is something else. I’m not entirely sure what, mind you…

On the one hand you have to grudgingly admire his diligence in promoting Kitten’s Joy’s stallion career. Yes, some (a lot) of it was luck, and there was plenty of mismanagement, but no one else seemed to want to stand the horse when he retired.

He does seem to think his money means his $&#* doesn’t stink. 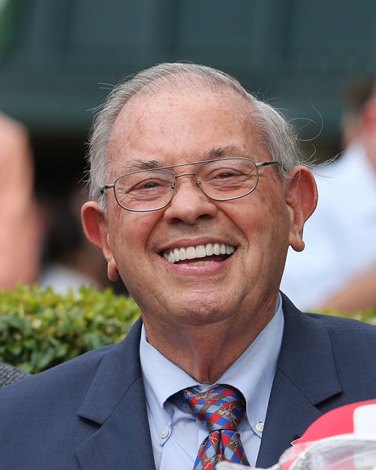 Ramsey Will Settle With Trainers Who Sued Over Debts

Ken Ramsey said trainers Mike Maker and Wesley Ward, who filed lawsuits to recover more than $1.8 million in outstanding debt, will be paid in full.

It’s most unfortunate that someone who “has a cash flow problem” but whose “net worth is better than it’s ever been” has to be sued by the people who work for him, to be paid money that has been owed to them for more than a year.

Mr. Bigshot, the people you owe aren’t claiming the large net worth that you are. Just pay them.

Honestly, why try to make the people who need to be paid for their services appear unreasonable? The entitlement stinks to high heaven.

Yes,mortgage something if you must. If only you had known that these folks needed their money

you would have mortgaged something sooner.

If you are bankrupt, admit it. Otherwise pay them. They trusted you with a bigger bill than most people ever would.

Methinks he doth protest too much. When someone blusters about how much they’re worth…too often it’s a desperate attempt to prop up a facade.
It’s just speculation on my part and there is of course a decent chance I’m wrong.
But the horse business has made millionaires out of multi-millionaires before.

He has admitted that he can’t pay his bills without borrowing . I hope the trainers are paid what he owes them.

For all I know he may be a nice guy, but he sure seems to feel entitled to let others suffer when he is experiencing such “net worth”.

From the article " he was also making loan payments on three farms he bought in 2018-19". Wonder if he was paying the bank on time.

You can say what you have is worth whatever you want. Just like with Zayat. The horses are worth millions, millions. Sent to the sales, only brought in thousands.

Honestly, why try to make the people who need to be paid for their services appear unreasonable? The entitlement stinks to high heaven.

Yes, rank entitlement. I have seen this in other fields. Wealthy people don’t seem to understand that people without wealth have bills to pay.

Unfortunately this is not an uncommon thing with the super rich even those that don’t have cash flow issues. It’s not just entitlement but greed and naked power. How far can I push this before you are forced to do something about it and then I will threaten you if you do. Maybe you get me to pay dribs and drabs off the bill which grows every month, the size of which can legitimately swamp even the largest stable.

The thing is all of that money can buy some pretty nice horses which is the bottom line of making it in this crazy business. That is why Baffert put up with Zayat for all those years. In a real sense, he used American Pharaoh to get in with the China Horse Club and Juddmonte so he could leave Zayat behind. Because floating big shots a million dollars just because they think they are indispensable gets old fast. Not to mention the fact, that some are pretty brazen about it and it becomes a business strategy. I knew someone years ago who managed a good sized farm who got upside down with a national level owner and had to watch the same guy buy millions of dollars in yearlings at Keeneland all while owing hundreds of thousands of dollars to this farm for ages with no attempt to pay. Essentially the billionaire was being floated a no interest loan and daring them to do something about it. I guarantee the rest of us couldn’t do that.

So good for these guys to call Ramsey’s bluff.

Did the trainers ever get their money out of Zayat?

Did the trainers ever get their money out of Zayat?

This is the most recent article that I was able to find in reference to his lawsuit.

Former Session Topper Given Away as Zayat Liquidation Continues

After nine months under court-appointed receivership to liquidate and manage its remaining equine assets, the insolvent Zayat Stables, LLC, is down to 12 remaining horses at eight locations, according to an October status report filed Nov. 11 in...

This one just popped up on my radar

Even As Fraud Suit Was Imminent, Zayat Now Claims Global Firms Wanted to...

Ahmed Zayat, the financially embattled Thoroughbred breeder and owner whose insolvent business dealings are currently being scrutinized in three intertwined legal cases, revealed in an otherwise routine bankruptcy court filing Tuesday that prior to...

Crazy to think that one of the biggest success stories in racing in the last 40 years would turn out this way after the fact.

I don’t usually quote the bible but it seems apt here: It is easier for a camel to pass through the eye of a needle than for a rich man to enter the kingdom of God.

A personal observation is that the more money an individual has, the more they believe they don’t have enough. OK, a sweeping generalisation. I once heard one of the wealthiest persons in the UK viciously complain about a trivial bill in a restaurant, citing his poverty.

There is more bad news on the horizon for owners, breeders, and trainers…not to mention small business in general. I may just go shopping.