Has anyone replaced the head on their hydrant with a different head?

I have a cracked Merrill Anyflow and I can not find a replacement. I don’t want to replace the whole hydrant if I can avoid it (although that might have to happen if the pipe is cracked too…

). Haven’t been brave enough to remove it yet

Been trying to reach the company, but no luck yet…

Has anyone replaced the head on their hydrant with a different head?

Yes, several years ago, but I had to buy the whole hydrant. Mine was the kind at Tractor Supply, though, so it was the easiest and fastest solution. Buy a 2nd hydrant, pull out the first head and spigot, and replace with a new spigot/head.

That said, I had my whole unit replaced this year by professional underground plumbers. It wasn’t cheap (cost about $600) but they were in and out in less than an hour. They had the smallest excavator I’ve ever seen. It was the size of a mini horse - I want one! The hole they dug was barely big enough for the guy to get his head/shoulders in, and when they were done you couldn’t tell they had ever been there.

Hmmm. My initial thought was nope, won’t work–but I was thinking of the head AND downrod. The rubber stopper at the bottom is different shape/size brand to brand. I tried that last year and it sure didn’t work. You’re talking about just the head…

Nope, still think the answer is no. They look to all connect to the down rod in a slightly different way.

If you look at how your hydrant is constructed at the downrod/head connection vs, say, an Iowa…probably just different enough to not work.

That’s my thought… but I was hoping!

This is what I hope to avoid. The hydrant is inside a shop with a concrete floor, so digging a hole is going to be a big problem… There is an opening around it that is about 1 foot square, not big enough to get down in there… I’m really hoping my office bathroom hydrant does not fail, that one is permanently in the floor… No opening in the concrete at all.

That’s my thought… but I was hoping!

You and me both, seriously! I wound up digging up two hydrants last year. A post hole digger is the way to go, if you want to do it by hand.

But wait! Isn’t this what you need?! 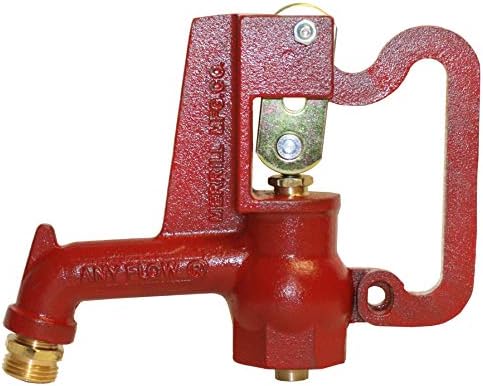 Genuine Merrill G-120 complete hydrant head. This head comes complete. This is for the 3/4" Inlet Residential Anyflow Yard Hydrant. There are no threads on the red cast iron part of the spout. The riser pipe diameter is about 1 1/4 inches.

No opening in the concrete at all.

Not now, there isn’t. There will be when you go to fix this.

I ordered the first one you posted, but realized I need a 1 1/4 in and that one says 1 inch (in the answer section below and on their site) so I canceled

that’s the one I need!

Do you have the high flow version then?

(Click hi-capacity at the top, I can’t link directly there, dumb)

Oh but no ordering there. Grrr.

After looking at the site, I thought I might, but they caution you that it is rare to have that one…

The spout is different, I do not have the threads on the spout like that one

It is not the third one you posted, handle is different

That’s why I was calling and messaging company, but have not gotten any answer yet…

Oh but no ordering there. Grrr.

yeah, I got all excited when I saw that, but no ordering…

And thanks for your help!

I see your conundrum!

At least with the second link, if it doesn’t fit your 1 1/4" pipe, you’ve got a very solid reason to send it back. It does say that’s the measurement

Well, I ordered it…

I looks right, as long as it fits my pipe…

And of course once I take it off, I’m hoping the pipe is not cracked too…

Fingers crossed for you!

thanks again. I did watch the video he posted and he shows the measurement to be 1 1/4 so I’m hopeful!!!

Here’s the order page for the high flow head, if it turns out that other one doesn’t work. At least it’s actually out there to order, so hopefully you won’t need it!

(Yep, I see what you mean with those threads on the outside) Genuine Merrill G-121 complete head. This head is for the 1" High Flow Industrial AnyFlow yard hydrant. BE SURE!! this is a rare item. It is an industrial size and you can be sure by checking to see if the red cast iron spout is threaded for a large...

This is what I hope to avoid. The hydrant is inside a shop with a concrete floor, so digging a hole is going to be a big problem… There is an opening around it that is about 1 foot square, not big enough to get down in there… I’m really hoping my office bathroom hydrant does not fail, that one is permanently in the floor… No opening in the concrete at all.

Oh bummer. My hydrant is on an exterior wall so the majority of digging is outside. Although, as I said, they dug a tiny little hole. My guess is that they can bring that tiny little excavator into a barn and do it from inside as well. You would need to break up the concrete but not a huge amount.

Finally heard back from manufacturer and he gave me another way to order… But he didn’t answer the 1 vs 1 1/4 question, he just referred me to a video that explained the differences I already knew…

So I asked him again

Sigh! Well, good news is you’ve got a dialog. Bad news is no new info