Doing chores yesterday morning in the goat barn we heard a cat yowling in the silo at the end of their barn . Sounded like it was in a pit.

We wondered if it was our feral cat named " Barn Kitty" that lives in the loft above ( i feed her) but later I saw her on the hay bales when I fed her and all was quiet so we thought it was her and she had a way out.

Well at 5:30 we heard it again. I looked to see if there was a doorway at our level to get into the silo and it was blocked by all kinds of heavy debris from years past. Just then my husband is coming up the hill to do his garden stuff and I said " there is a cat trapped in the silo".

I married a good man – even though he was tired, had his own stuff to do , had a long day at work and a 90 minute commute ( one way) he went right over and started clearing the heavy debris away, went and got a ladder, climbed down into the silo ( at least 6 feet below ground level)

and found that Barn Kitty had 2 kittens down there!

1 sadly was dead but the other was screaming up a storm!

He brought him up and I took him into the loft and put him near Barn Kitty and he went right to her. I didn’t know if she would move him again or worse yet put him back in the silo but this is what I found this morning.

Please excuse the pigeon feathers . We have unwanted pigeons and I need to sweep! 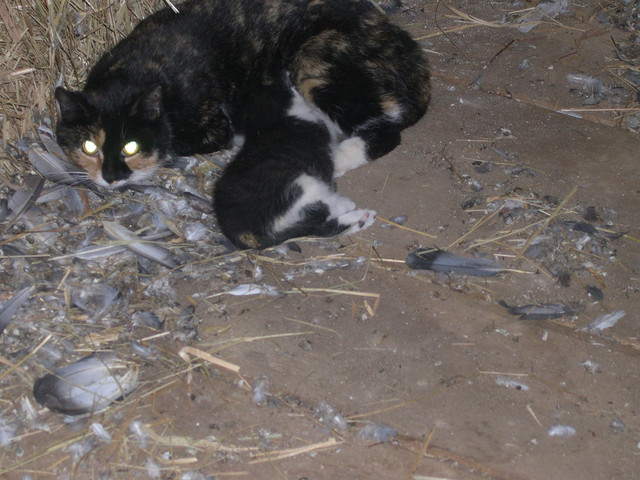 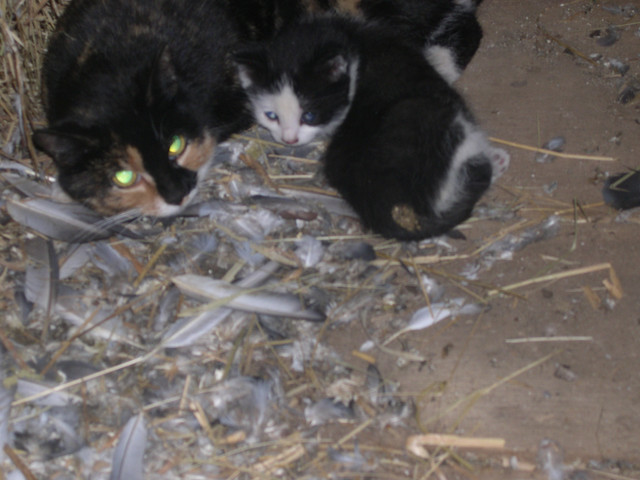 I named the kitten “Silo”.

Gosh I needed that! Give your husband some extra carrots tonight.

Your farm is beautiful, so old timey.

The other one was healthy looking too. I have no idea why it died? I hope he keeps the blue eyes but mostly I hope he thrives

Hard to say, but I’d think maybe around 6 weeks?

Love your story ~ Bless you and your husband for helping mother cat and the kittens ~ heartbreaking one kitten was gone but heartwarming “Mr. Silo” was rescued !

Thank your husband for doing all that to help this little critter and thank you for restoring him to his mama and helping them both. Mom looks like she is sleeping in the middle of dinner with all those feathers!

Love your farm. I have always dreamed of owning a place like that.

Could it have been injured in a fall if the two kittens somehow fell down there? The one looks at that “starting to be exploratory but still awkward” stage. Ears are unfolded. Four-fiveish weeks, maybe? Picture below of three orphaned kittens that had just been to the vet a few days before when I first got them, and the vet estimated fourish weeks. Yours looks a bit larger.

Silo is adorable, and your husband is a great man. 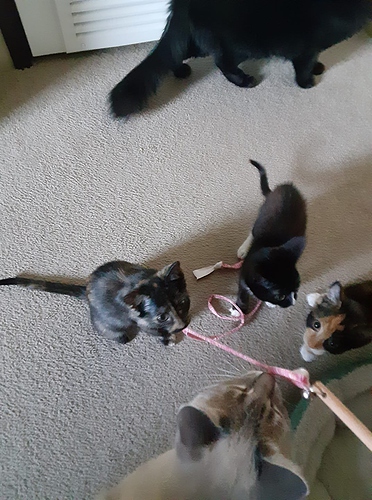 So glad you were able to rescue him!

Husband of the Year Award!

& You too for reuniting BarnKitty & kitten

Not that I could see. I looked him over good. He has 2 dried dirt ( poo?) balls on his tail but they were old and hard and I didn’t want to rip them out. His bottom and legs were clean.

Picture below of three orphaned kittens that had just been to the vet a few days before when I first got them, and the vet estimated fourish weeks. Yours looks a bit larger.

I was thinking yours look larger than Silo. His legs look shorter and he doesn’t look as mature? He may be a bit behind the curve though.

I am hoping to eventually get her caught and fixed. Him too.

I can get pretty close to her now but she growls at me with the kitten there. I do not want to freak her out and have her feel the need to move him, so I will bide my time.

We have the silo opening at ground level blocked ( it has doors) but there is another opening 8 feet above that one and another up by the top where that little building is. There is a rung ladder in the loft for that one.

I honestly have no idea how she got in and out to feed them? We looked and it is solid concrete , except for those openings.

They have a lot of work to do we have at least 12 that I can see and they do have nests I can’t get to.
If they put the nest in certain spots Barnkitty is very successful.
They seem to come and go…

Wild as can be! I get glimpses of him playing on the hay bales ( his stack is shrinking) or in the loft before he flees for cover. He does peek out at me and I talk to him so hopefully he will settle as he gets older.

Momma cat is so protective she hisses, spits, growls and comes at me when I am feeding and watering

I have zero mice so I guess I will put up with her bad manners!

I’m glad they are doing well. And don’t you just love an ingrate? Hissing and spitting at the cafeteria lady indeed.

I told her how rude she was being after we went to all the trouble to save her baby and lugging her food and water up into the hay loft every stinking day!

I told her how rude she was

Mind your manners!
Have you never heard:
“Dogs have owners, cats have staff”

Ms BK is apparently giving you an Oral Review.
Better shape up before the written version!