Some snow drifts may exceed 7 inches

well leave it the National Weather Service to make me laugh … was checking our ever changing forecast which has been like throwing a dart at a target.

Lol, that is hilarious. Meanwhile, the drifts on the road to my family farm tower over the vehicles…

Better watch out for those 7 INCH DRIFTS.

I received this gem from the school district:

Due to multiple accidents in the area, NOT involving busses, a lot of our busses will be running late this morning.

Not, I repeat NOT, involving buses.

Now they dropped ours to maybe -12F for Monday morning.
They say they don’t think we will hit our 1899 record low of -16F
Sure hope not!

I may have to get my snowshoes out, if we get 7" drifts.

given the current conditions I really have little idea as to just what will occur, they say a "high of 38… then it never gets above 27…so they just remove a projected high temp and insert a dashed line which I guess means we have no idea what the high is to be.

Horses and goats are kind of used to the conditions, none have rejected the attention…even Bonnie was such a pleasant caring horse this morning seemingly asking if I was cold as she put her head in my hands…only to find out she wanted her ears rubbed

Due to multiple accidents in the area, NOT involving busses, a lot of our busses will be running late this morning.

Not, I repeat NOT, involving buses.

This makes sense to me. They want the parents to know that there will be a delay due to the crashes in the area, but that all of the kids are safe and not involved in the accidents.

As someone whose brother was in two different school bus accidents when we were kids, I can see the school not wanting to worry people. Parents of students on the bus freaked out both times.

This seemed to be a good thread to inject a laugh, and post the clip of the News anchor asking the weatherman “well Bob what happened to the 8” you promised me last night?” A clip I would swear on a stack of bibles that I have seen.

Only turns out that it is some sort of urban legend

That’s what goes on in my 'hood. When a small storm was predicted last Saturday (day before the Super Bowl) , the line at one Harris Teeter grocery store wound all the way back through the floral & produce depts & into the frozen food section.

Fortunately, I am a die hard Aldi shopper & know I will never be in line longer than 5 minutes. No matter how crowded. The cashier may accidently chuck my frozen corn past the cart onto the floor in their haste. But that is a small price to pay for efficiency, my friends.

well That started a few days ago as the grocery stores were packed worse than last spring’s toilet paper and hand sanitizer shortages…I was looking for the iced oatmeal cookies for the old pony …which were ALL gone …so have had to substitute something else which he spit out looking at me with a question Are You Trying To Kill Me?

LOL! Wow I haven’t had or thought about French toast in forever and now I would kill for some, thanks… Must be all the sleet we got today.

You can tell this is not Alabama because it would read " some snow drifts may exceed two inches". And that is a blizzard down here!

Did you already get bread and milk?

I heard the shelves at Texas HEB’s were low to empty as early as last Friday in preparation for the storm.

Our low predicted tonight ( temperature without wind chill ) is -23F.

I am always amused by NOAA NWS (which is the source I choose for weather info) when they predict “breezy”. 25-30 mph is a wind to me, not a “breeze”.

My favorite weather experience was when, years ago, I was listening to the radio and the Emergency Broadcast System broke in with the usual honking, and announced that there was a tsunami warning. Being in Colorado, I had a quick think about it and decided that if there really was a tsunami on the way , that I probably would have heard about it, since the water would have already crossed over California,through Nevada and Utah and gone over the Sierra Nevada range, as well as the Rocky mountains.

Since that seemed rather unlikely I thought about the possibility of a tsunami coming from the Gulf of Mexico and discarded that possibility rather quickly as well.

It did make me think about geography though. Of course they did come back on the air to announce their mistake, bless their hearts. By that time I had decided that if they were serious, there was absolutely nothing I could do about it anyway.

Northern VA, and all around the beltway was the worst for snow panic. People rushed to the grocery store if an inch of snow was expected and schools were shut if there was any snow on the ground. I suppose it just depends on what you are used to, and prepared for, but it seemed so weird to me.

It seems we will all need to be flexible now, with the climate going to extremes. 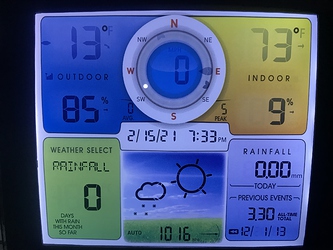 I am not sure we broke any records but here it is nearly 9am, full sun and it is 5F … and there forecasted low tonight is 4F?.. I guess we are to have a warming trend tonight

I’m in NOVA. Lol. I think it is a combination of: 1) the climate here being on the cusp of requiring robust snow removal equipment but mostly being cheaper to just shut down during those storms 2) It isn’t cold enough here for proper, well-behaved snow. Instead, we get heavy, wet stuff that partially thaws & refreezes. It is more like someone spilled an industrial-sized Slurpee all over the road than snow.