This one looks like a good one but it is pricey.
Need one that is strong enough to keep flies away
And has a closed motor.
wall or ceiling mount.

I have a similar fan that I bought from Ramm. IIRC mine is 18”. It’s great. Make sure you get a sealed motor.

Yes a sealed motor is mandatory.

I would also like one that is solar and has a motion detector so it only runs when the stall has a horse in it. I think that has yet to be invented

Has anyone tried https://www.homedepot.com/p/Maxx-Air-18-in-Wall-Mount-Fan-HVWM-18-UPS/204409901?
The price is really reasonable for a closed motor fan, to the point where I’m considering driving up to the closest US Home Depot to order it, and then back again to pick it up, as it doesn’t appear to be available in-store, and the Home Depot site only allows US credit cards

This is the velocity of the wind movement produced by fan.

I have been trying to look up cfm required to deter flies on the internet to no avail thus far,
Surely some scientist has put some flies in a wind tunnel to see at what air speed they can’t fly.

I think the power of a fan for cooling vs deterring flies would be different.

Maybe other fan owners can speak to cfm of the fan they own and effectiveness at deterring flies.

I have 4 Maxx air fans (floor fans so I can adjust and move them easily).they are well made and quiet.

I am about to conduct my own research here!!! I am assuming the speed of air current generated by the fan would be strongest directly in front of fan losing velocity with distance from the fan in direct path of airflow as well as less velocity laterally from the direct air flow. Oh I so want to go to a bar and meet a handsome entomologist who specializes all aspects pertaining to the flight of the Musca Domestic. I would love to be enlightened in any manner that this handsome scientist might propose.Truly I am desperate!!!

I think any fan will deter flies from some areas, so I think the bigger question is how many fans and where to put them? I have used cheap fans from Walmart in stalls and they deter flies, but don’t have closed motors (and aren’t very strong). They die pretty easily (probably dust, along with being a fire hazard), so I’m looking for alternatives too. (Really liking that fan from Home Depot!)

But those were for stalls and my horses would stand right in front of them. They wouldn’t be strong enough for a whole barn aisle, etc.

That said, if they are too big, I don’t know that horses will want to stand in front of them - it might be uncomfortable. So there is definitely going to be a tradeoff.

I would think multiple, moderate velocity fans would be the most beneficial.

I have 4 of these? Occasionally they are stall fans but I use them around the house while in my flower beds or sitting by the fountain, etc- the low setting is still powerful but quiet. The middle setting is louder but not awful and ample air. I only ever turn it to high when Alabama has tried to melt me and I’m super gross.

If you can use a floor fan like this you have so many options.

The Maxx Air 16 In. Turbo Floor Fan design offers powerful airflow packed in a heavy-duty, yet portable fan that is a fantastic addition to your home, office, shop, or garage. This quiet air circulator utlizes a deep steel shroud to pull in and push...

Well I read that house flies, what I have can fly 5 mph so anything blowing at them above 5 mph should work. However fans don’t List mph and and I haven’t had much luck finding a way to translate mph to cfm. Plus as I have mentioned, the air velocity coming of the fan would be expected to decrease with distance from the fan.

I bought these last summer and they are great. I have them on a timer to run all afternoon. They do a great job of keeping the flies away. I had wanted waterproof fans that I could spray down to clean, but that was beyond my price range. I just use a leaf blower to clean these off. Prior to purchasing these I used box fans with furnace filters tied to the backs. I switched out the filters every month and this worked fine for 2 years, but I was always a bit concerned about the fire hazard of unsealed motors. 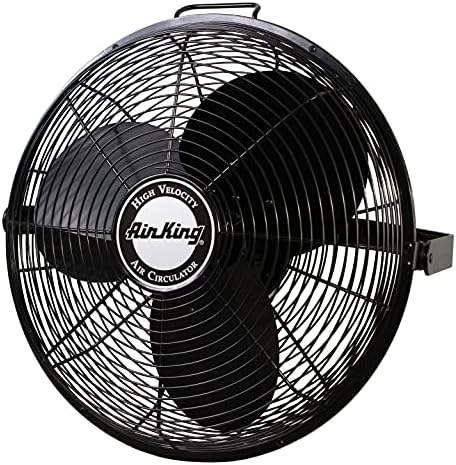