Starting over, again…..and need help with a name

In the past few years I’ve had a string of very bad luck with my personal horses. A gelding I raised from birth and was the son of my very first real “heart horse” had to retire early in his teens and then was euthanized when I no longer felt comfortable with his pain levels and quality of life. A very promising young show horse sustained bilateral hind suspensory injuries, went through the whole rehab protocol, and is still not sound. He’s taking up a job as a babysitter for a friend’s elderly gelding. And a mare I purchased to give me something to train and show while the above suspensory horse was unrideable, inexplicably died from liver failure of unknown origin.

Needless to say I’ve been feeling a little gun shy from repeated heartbreak.

I always have a sale horse or two coming in and out, and school ponies that I teach on, but I’ve been missing not having “the one” just for me.

Ever the optimist, I’ve been very casually shopping (with a much smaller budget due to the past year’s vet bills eek) and really just hoping the universe would give me a sign or even better, throw the right horse in my path.

It appears that has happened.

A couple weeks ago, a friend I know through horses and horse shows only, contacted me out of the blue and asked if I might be interested in one she had. A gelding off the track who came from very good connections and that she had intended to get going to sell, but because of some health issues of her own she had just let him sit. She told me she thought he might be the real deal. I respect this person’s judgment very much, as over the years I’ve seen her select and make up one very nice horse after the other.

Sure, send me his info and some video, I said.

Long story short, I’m bringing him home next week. He’s way prettier than I usually like mine to be, 6 years old, been off the track for almost two years. She sat on him just a few times, enough to know he’s reasonably sane and has all the right pieces, but he’s really just been hanging out and looking handsome in the field.

I have no idea if he’ll be “the one” or not. Once again I’m taking a chance and hoping this time it works. I wish I was feeling all in with this decision, but I know it’s reflective of feeling burned too many times recently. Maybe that’s why I’m having trouble coming up with the right name for him.

Suggestions welcome and thanks for allowing the therapy session. 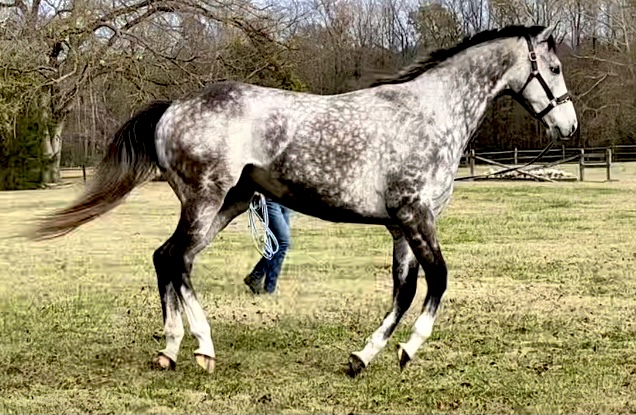 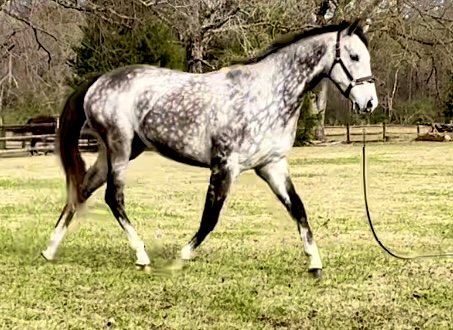 He is dropdead gorgeous

A long time ago (20+yrs) someone I knew had a dapple gray like that & called him Lake Effect < for the “snowflake” pattern.

Corny, but I always love Silver Dollar! I once saw a horse with that name whose barn name was Pancake. 10/10 names.

As a JR, I was obsessed over a grey horse named Silver Dollar!

How about Heartthrob? What’s his breeding/JC name?

For some reason the name Unexpected popped into my head when I saw his photos. I wasn’t expecting a grey I guess! He is gorgeous

Oh hey I like that! I felt the same way when she sent me his pics/video, as I was expecting a bay for some reason.

How about Heartthrob? What’s his breeding/JC name?

He’s by Exchange Rate out of a mare by Fantastic Light. He was definitely bred to be a successful racehorse. Along the lines of Heartthrob a friend of mine suggested Beach Body

Wow! What a beauty! Throw your heart out there and maybe he’ll be the one.

Oh hey I like that! I felt the same way when she sent me his pics/video, as I was expecting a bay for some reason.

He is stunning. I really hope he brings you some Good Luck. It sounds like you are due for some.
I really like the name Unexpected. It’s classy and unique to your situation.

That is one gorgeous animal.

Spend a little time with him. The name is there.

What a gorgeous boy!

For some reason Earl popped into my head. Maybe I was thinking of Earle Gray. I hope he ends your streak of bad luck!

Wow, he’s gorgeous! I’m a sucker for a gray, but I think even hard-core gray-haters would love his looks!

I like Unexpected and Diamond Dust. Earl Grey is nice too.

Sam Adams was a silversmith by trade (at least originally), and it might be a cute name for a horse. (Although people will think you’re referencing the beer, but that’s pretty good too).

Whoops! my bad: Sam Adams wasn’t the silversmith, Paul Revere was (duh). Anyway, I still like Sam Adams as a name, but maybe it’s not quite as appropriate as I intended.

I also like Unexpected, or you can add -ly to make it Unexpectedly. So and So riding Unexpectedly, heck add well to it and its a fun name; riding “Unexpectedly Well”.

(I crack myself up).

Sterling is good too, runs in line with his sire’s name.

He is stunning as others mentioned. I am looking forward to hearing what you pick and watching you progress with him. I hope you share.