STF, where's my "Who owns a designer Friesian blend" thread??

Feelin’ neglected. There’s one for EVERYONE else! :lol:

You should give your husband that mule for Christmas and start a mule thread!

hmm your sig line would look good on a bumper sticker with “shepherd” instead of “cattle dog”.

Oh that WAS my next thread! Some people got their panites in a twist and I stopped posting new threads! :lol: :lol:

We have a black/white tobiano paint/percheron with 2 blue eyes that I could sell as half friesian. Does that count?

[QUOTE=Stacie;3737853]We have a black/white tobiano paint/percheron with 2 blue eyes that I could sell as half friesian. Does that count?

[QUOTE=Stacie;3737853]We have a black/white tobiano paint/percheron with 2 blue eyes that I could sell as half friesian. Does that count?

I know STF got blasted, but I’m enjoying all of the pictures everyone is posting

You should give your husband that mule for Christmas and start a mule thread!

hmm your sig line would look good on a bumper sticker with “shepherd” instead of “cattle dog”.[/QUOTE]

That mule would be the BEST husband hors - er, mule. I totally should! Now if we can just win the lottery between now and X-mas so as to get a barn, sacrifice paddocks, arena, turnout fencing, and hay delivery put together in time for bringing the new boy home! It’s just the lack of those few things - a trifle, really - holding me back!

Weeeelll… she’s not a paint cross, but I bred a custom foal–a Pinto Friesian cross.

Here are some early photos, haven’t gotten the ones from this summer/fall online yet.
http://s2.photobucket.com/albums/y6/pintopiaffe/InnisFaeth%20Filly%20071307/

Her sire is *Nico and her dam is my grand old NSH mare… She is maturing into a lovely, lovely young lady with excellent gaits and a gorgeous neckset.

Cadence In Colour may have a date with that mare’s granddaughter. I LOFF him and he’s doing very well in dressage with huge potential. :yes:

PP- your colt IS lovely. Im enjoying all the pics, too.

Hi guys, hey, thanks for the nice words about Cadence! Yeah, he’s my boy, and I have to admit, he’s a dream come true… My trainer just rode him a couple of weekends ago in a clinic with Juan Matute - and Juan had some really positive things to say about him. I figure, once a multi-time Olympic rider says the horse has what it takes, he has what it takes

Watch for Cadence in the FEI ring in '09!

Pinto P - I also have a Nico filly - she’ll be three in '09! But I don’t think of her as a Friesian/Payyyynt cross :lol: I think we need to change the title of the thread to “who owns a Freeeeeeeeeeeesyan Designer Cross”

I have a few of them thar ponies… Mostly the Friesian/Warmblood variety though… You’ll really like your Nico foal - I have to admit, if mine doesn’t sell this year, I may consider breeding her to Cadence too…

There ya go, FriesianX - now everyone can play!

That filly was a custom, and sold a year before she was born.

She’s AMAZING, but I suspect will mature a bit too big for my tastes. It’s probably a GOOD thing she was sold pre-conception. She was the black and white filly of my dreams, and, much to my chagrin, the last of that great, GREAT broodmare. :sadsmile:

SOOOO exciting about Cadence in Color. I’ve been reading your threads about the clinic–the fact that it was a BAROQUE afficionado–boy, that has me even more excited!

I actually picked him, the lessee picked *Nico back three years ago.

The Friesian temperament reminds me a bit of the Fjords. Very people oriented and not much phases them. Different than WB, different than hot bloods. Not everyone’s cuppa, but I sure liked what I saw until she left as a yearling… a tiny bit lazy, but in a good way–i.e. “that’s not worth the energy to spook at.”

Definitely less reactive than the ayerab crosses–plusses and minuses there–all depends on what you’re going for, 'eh?

I have the granddaughter of the *Nico filly dam, who looks so much like Grandma I have to look twice at times… we’ll see. Damn economy is annoying me, I have PLANS damnit, PLANS!!! :lol:

There ya go, FriesianX - now everyone can play!

Yeah, I have the designer Freeeeezhun blends - my favorite horses are all Freeeezhun Mix n’ Match…

Now, if only COTH allowed us to post pictures;)

Now, if only COTH allowed us to post pictures

Well now we can! This is my designer blend, Friesian X TB. He definitely got the best of both breeds: marvelous work ethic, canter to die for, and the sweetest guy you can imagine. 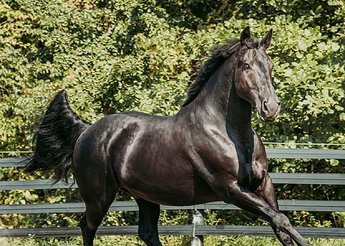