So back in 2020 there was a catastrophic derecho that knocked the whole state of Iowa for a loop. 80-130mph winds for an hour straight. On our farm we were very lucky that no one was hurt and only one outbuilding was damaged. House took a couple of solid knocks from falling tree limbs but generally unscathed. But oh, the trees. Devastating and overwhelming how many trees were down, blocking the driveway, in the hayfields and pastures, just everywhere you looked there was massive amount of cleanup to do. Because it was late august, the trees were all in full leaf, so the massive old trees took the worst hit.

So we just started cutting eveything into big 8-10ft logs and dragging it into the orchard where we lined the entire fenceline with piles of logs. So, about 700 ft of fenceline, stacked 4-5ft high with logs-- it looked like a medieval fortress. Just about every weekend that weather permitted, we have plugged away at the fortress, bucking the logs into smaller pieces, splitting those into firewood, stacking firewood, cleaning up and burning the stumps and small debris.

The milestone: yesterday, almost 2 years later, we cut and split the last of the fortress logs. I swear my husband had tears in his eyes - so often it felt like an insurmountable amount of work but we kept at it. (ok, so we’re not entirely done–there’s still a whole giant oak tree on the ground, but it’s way out back and not in the way of anything so it’s been the lowest priority. We’ll tackle it in the fall when the brush dies back.)

Suffice to say, we have a lot of firewood.

Congrats ! Job well done. Reminds me of the saying …how do you eat a whole elephant ? One bite at a time.

I know the feeling.
Had to have repairs done to the hydrant in my barn. In February

Guy dug down 4’ for the repairs & left me a huge - 3’hX3’w - pile of gravel after he refilled the pit.
Pile was in my drylot that attaches to the barn.
He said he’d come back to drag the pile flat.
He never did.
I spent most of the next several months shoveling that gravel until the pile was gone.

I realize it doesn’t compare to your labors, but it felt like Eternity to me

We don’t have a forest, or a Sisyphean task as yours, but this is what our yard looked after an ice storm and blizzard.
Our yard trees are the only trees for miles around, they were looking so sad.
Most trees survived and thrived, a few didn’t: 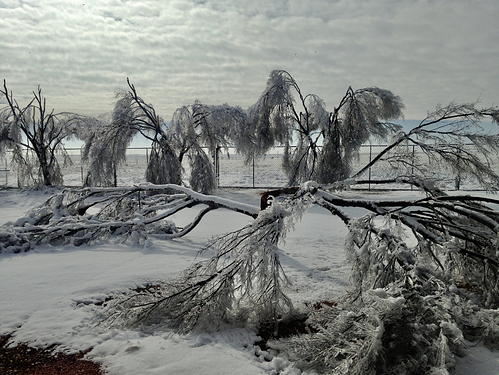 I bet you and DH are extremely proud of yourselves and, as they say, buck firewood and it warms you twice, when cutting it and when burning it.