Stray kitten - FeLV - should I be worried?

So, we have an barn cat that was a stray. He has the cat version of HIV. Vet says he should live a long happy life. He lives by himself and is quite happy.

We have a house kitten, that was a stray. She is now 1 yr and completely healthy. She was dumped at our house.

DH found another kitten, dumped at our place Thursday. We have decided to keep her instead of turning her over to a rescue. She’s been under quarantine in our house, from our other house kitten. We thought she was about 8 weeks old. We took her to the vet. She is about 4 months old - so very tiny. She has drippy eyes and crusty ears so she is being treated, of course but now I’m worried about her having FeLV or other disease. She will be tested on Thursday. What do you all do if you end up with a cat with FeLV and have other cats? Is being small a sign of having a disease or just having a very rough start? Any insight would be appreciated. I’m not a cat person but I do like the cats we have.

FIV is not that bad, but FeLV would be an absolute deal-breaker for us. I hope your little guy tests Neg/Neg!!!

I have a cat that has the FeLV virus and two other cats that are FeLV negative. The FeLV cat was a stray that showed up in our barn and decided he wanted to be an indoor/outdoor kitty. I had no idea he had the virus until he developed anisocoria (uneven eye pupils) and it was diagnosed as spastic pupil syndrome caused by the feline leukemia virus. The vet thought the virus was probably acquired while he was a stray. Anyway, long story short, he has been with us 5 years now, apparently perfectly healthy except for his weird eyes. My other 2 cats are vaccinated and have never shown any signs of illness, and they all share the same food bowls for their kibble. I keep this cat in at night to decrease the chances that he’ll infect any unvaccinated cat that he might encounter. Other than that, he leads a normal and happy cat life. We live out in the country with plenty of acreage, so he can prowl a bit. If we lived in town that wouldn’t be possible.

When my cat was diagnosed with FeLV, the vet offered euthanasia as an option. I declined, and I’ve never regretted that decision. When I declined, the vet said she wouldn’t have euthanized the cat either if it was hers. I decided to just take things one day at a time, and when the virus becomes active we’ll deal with it then. I fully expect that this cat will have a short life, but so far he’s had a happy 5 years with us.

My biggest worry was that my other two cats would be infected, but they had already been exposed for about a year before we knew the stray was infected (he had tested negative before vaccination). I won’t take in any kittens while I still have this cat, because they would be at greater risk of becoming infected.

@millerra, you asked if being small is a sign of the disease or just a rough start–it could be either one. You’ll know when you get the test results. Or it could be that she’s just a small cat. If she does test positive for FeLV, your vet can help you decide what to do. Fingers crossed for a negative test, and I’ll be watching for an update.

First off, don’t cross your bridges before you get to them. You do not even know if the kitten has a health issue, let alone that it is “FeLV” (which I assume is an abbreviation for Feline Leukemia).

Second, in my experience Fe Leuk is quite manageable. We had two Fe Leuk cats that lived with our other cats (One was a stray who showed up in out barn. The other was a cat from out vet. The original owners has asked that it be euthanized when it tested positive, but the vet knew we already had a Fe Leuk cat and asked if we would take it.) Neither of them were particularly small.

At first we kept them separate from our other (house) cats, but the logistics became too complicated, so we ended up keeping them all together (including feed and water bowls). Both of them lived about 6 years and died (uneventfully) within a month of each other. None of the other 4 (vaccinated) cats were affected.

I have no regrets about keeping them.

Deep breath. Until you get the test results back, no use worrying about what it might/not be.

If your other cats are vaccinated for FeLV (which they should be), then no worries, even if the new kitten is positive.

I had an FeLV kitten. She probably had it when she arrived at about 6 months of age, but we never tested her for it until she began to show symptoms about three years later. Though she did not live long after that (I think about six more months), she was one of the best cats I’ve ever had, and I still miss her. I think some advances have been made in treating it, though, since then. I will say that we called her Bitsy for a reason - she was extremely small! - but I don’t know if that was due to the virus or to the fact that she was dumped quite young and fended for herself for a long time before I found her. Or genetics. Or some combo thereof.

One of my barn cats is FIV-positive, and still going strong at 6 years, though we lost her FIV-positive brother two years ago. It really depends on the cat, and how they handle the virus.

FeLV would not be a deal breaker for me, knowing that my cats are vaccinated and knowing, going into it, that the cat may have a shorter life and incur a few more vet bills than usual.

We have nine cats, and two others that we sometimes feed (we TNR’d them, but they were too fearful to stick around). We don’t test them because the risk of FeLV being passed is low, and these aren’t cats that would have good alternatives for homes if they do end up being positive. This is OUR comfort level though - our area is drowning in feral and abandoned cats, and we would rather give many a good home with some risk (they also face some risk by being indoor/outdoor or barn cats).

I hope your kitty gets better soon.

Kitten got a clean bill on her tests, just a upper respiratory infection and ear mites. She’s tiny but mighty

here is the tiny but mighty. Giving her the eye drops is now like holding an octopus with claws… even wrapped in a towel. 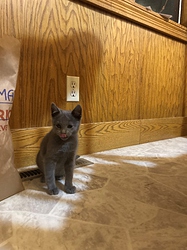 I had a gray cat (solid gray) that was super sweet. I have a gray and white now that is a handful.