Tack Lockers for the barn

Hey y’all! I was wondering if anyone could show me your tack lockers specifically for Western gear. Preferably upright. I’m fixing to have to build five of them and really want to get a better idea of how I can lay things out. I’ve been looking on pinterest but those seem to be primarily English set ups

Something like this, built-in, or portable ones?
If inside a tack room, they don’t need to be more mice and dust proof, outside, in an aisle, better be tight. 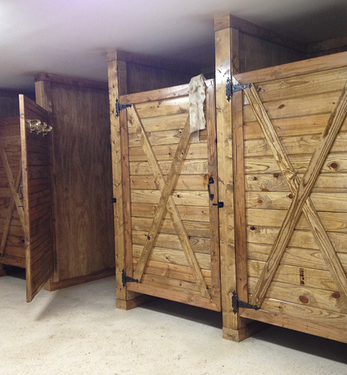 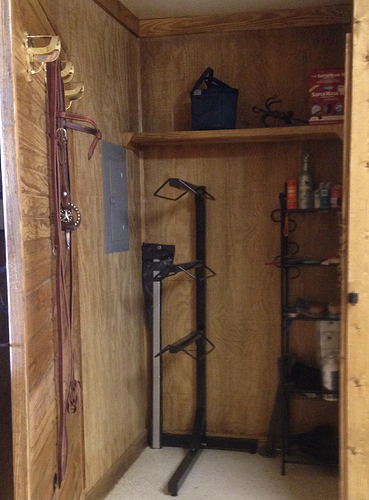 I like those a lot! There is a slight disagreement as to whether they’ll be in the tack room or out in the main barn area (in which they do need to be completely enclosed and lockable)
We’ve got 12 saddles between 4 households with lots of gear.

Edited to add, I don’t want portable ones. I have smaller, easily movable trunks for shows that fit our gear minus saddles and pads

Those we have were easy and cheap to build.
We use portable saddle racks because so we can arrange them at wish in there, but hanging saddle racks would work also.
Most here leave much tack in the trailer as they travel so much, sometimes tack lockers end up mostly with stuff that is used less, for storage more than every day use.

Consider what would be best use for how you ride, then build for that.

It’s my Mama, two of my sisters, and myself here at this property. We’ve got the entire barn to ourselves. So they don’t technically have to be movable and lockable, but I’d rather them be able to do those things in case we ever have to leave this property.

We’ve got custom saddle racks my husband built for three of the Western saddles several years ago, the rest of the saddles are on foldable or wall mounted racks. Those could be incorporated into either style locker honestly. We typically ride at home or on local trails, haven’t shown in a LONG time but we do want to get back into it.

I need to go take measurements of the tack room, utility area, and the big saddles. Those will help make the determination I suppose.

Pros of closed tack lockers in main barn:
~Everyone’s got a private, lockable cabinet.
~Moveable even if heavy.
~Nice looking and hides the clutter that horses bring
~Having these means the current tack room can be cleaned up and become a lounge for us & the kids

Cons of closed lockers in main barn:
~They’re going to be EXPENSIVE to make the size we need/want, even for one. I need to make at least four, possibly five if my daughter gets her own for all the pony crap.
~They will take up pretty much all of the utilities area.
~We’d have to move three outlet boxes and an A/C unit.
~Higher risk of theft due to being right at the front of the barn and only having one lock

Pros of tack lockers in existing tack room:
~Can be done much faster financially. Will cost less than half of Outside Locker build, including finishing out the walls.
~I can do this build in just three or four days, even solo. Including tack clear out, wall finishing, construction, and moving the tack back in.
~Less hassle all the way around.
~ Two layers of security (tack locker individual locks & Room locks) versus just individual locks in main hall.

Cons of tack lockers in existing tack room:
~Not moveable with us if we have to leave.
~Can’t make them as nice
~May not be able to use tack room as lounge due to space constraints.
~Have to get Daddy to run new wiring which is a PITA.
~I do have to finish the walls out (stud walls with exterior plywood currently) and the ceiling eventually

I guess if I had a farm of just family I would use the whole tack room and have a wall of saddle racks and a wall of bridle racks and label those racks accordingly for each horse or family member.
Similar with supplies like fly spray and shampoo, every time gets their own shelf.
It keeps everything open and you can still use the tack room as a lounge.

Also to consider whoever else is going to use the tack room, if open, be as neat as you require, or is better to have them keep their messy stuff hidden in lockers, saves aggravation.

Another option is to have a wall of saddle racks and then a set of lockers that hold everything else.

If they’re sealed-ish (stone floor, or small gap at the bottom etc) you better have strict strict rules about NO TREATS in them. Any tack locker system that allowed treats but not cats ends up infested with mice.

See, that would be the problem. Some of us have different acceptable levels of neat than others.

Ohh I like that idea! That would be even quicker to construct than the other idea.

All treats get stored in the feed room, in sealed buckets or our feed cans. I do agree, that is a big consideration.

I do too. I could make them fairly quickly too AND have them look good.

I just want to say those are super cool! Neat idea.