Tarter hay basket with slow feed net - who uses one?

I have this hay feeder and use it with this slow feed net. I can easily fit three small square bales at a time and if I use the net, there is little to no waste. Without the net, however, half of the hay ends up trampled on the ground.

The net is a PAIN to get open though, and even more since one of my horses chewed through the cord. Has anyone rigged an easier way to use the net? I’m thinking of opening the net completely and placing it over the top clipping it to the feeder with…something? Giant carabiners, perhaps? Any brilliant ideas?

I put the hay net into a muck basket, draping it over the sides of the basket then drop whatever amount of hay into the hay net

We have the same hay basket, and purchased a piece of netting to cover it (think the original purpose was for hockey or soccer goals) which was large enough to fall into the empty hay basket. This gave enough slack that the horses could continue eating as the hay was consumed, and the level went down.

We paid the slight upcharge to have the net bound around the edges, and used giant versions of those elastic loops with balls that are hair accessories to pull long hair back into a ponytail. Looped them through the netting, and around the metal pipe of the hay basket.

At one corner of the net (it was square), we put a double-ended snap that we snapped onto a stout nylon dog collar fastened to the hay basket (to the metal ring that normally holds dog tags). This snap was easy to undo, allowing the net to be lifted and hay put into the basket, without undoing the elastic loops holding the rest of the net in place. When we did want to remove the net entirely, for instance to clean the basket after rain, it wasn’t difficult to remove and re-install the elastic loops.

Worked quite well for a long time - and the neighbor who fed for us occasionally didn’t mind it – but we eventually quit bothering with the net, as we didn’t think it slowed the horses down all that much.

I can visualize a version of what we did done with those velcro loops used for cord management, in place of the elastic loops.

@clanter that is the method I use for the hay nets in my stalls, works like a charm! This feeder could almost hold a round bale though, so the net is giant and a muck tub wouldn’t work

@Jarpur that is an awesome idea, I wonder where I could find something like that… For now, I have the net pulled open as big as it gets and it’s draped on top of the hay and I’m using the cord to tie it around the top of the feeder. Much easier than using it the way it’s intended but I like the elastic idea better.

I looked them up – what I used for fastening the net to the hay basket frame are called ball bungees, or bungee balls. I used a couple of these per section of the frame. Since the net was plenty large enough to easily drape into the basket, there wasn’t really any strain on them.

I bought the net (this was several years ago) from these people, with the optional rope border: 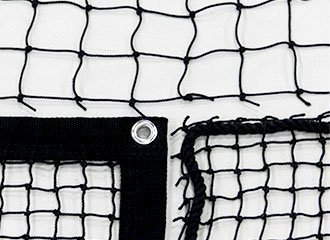 When you need custom netting solutions for your various sports applications, shop our nylon sports netting. We are your premier nylon net company and offer cut to order custom solutions to fit your needs. Contact US Netting today to order your custom...

Seems to me as though you could possible use your existing net, but use the ball bungees to fasten it to the hay basket.

Thank you! Found them on Amazon

Should make things a lot easier!

I use the net kit from DIY hay nets for my hay basket and it works well. It has a pex ring around the net that supports the edges of the net on the top of the basket. The kit comes with hardware that lets you open it like a clamshell. You might be able to come up with something similar using pex to support the outside of your net but I’m not sure what would be the best way to then secure it to the hay basket without the specialized hardware.

I use the Hay Chix round bale net secured inside of my tarter hay basket. Works like a charm! Had both for 3.5 years now and they have held up great. And as you said, no hay waste!

Mine is great! I gather the exterior rope up, put a square knot into it, and then I tie it to one of the legs- loop around, and put a quick release into it. Easy, peasy. I can get up to eight small squares into it pretty easily, and it works well. By the way, I stack them 2 one way, then two back across those- and they stand up well while I gather the net. Hay Chix sells the black cord to repair the nets, although I admit to having used baling twine a time or two.

If they weren’t so damn expensive right now, I’d buy another one!

So, you don’t have the Texas hay net I have, correct? It sounds like yours is much bigger if it can hold 8 square bales. The one I have is just really hard to pull closed all the way, I really have to wrestle it and it’s exhausting! I wouldn’t mind a bigger net, but I just forked out over $100 on this one and have only used it a couple of months which feels like a waste if I replace it already!

I also have one horse that tries to crib on the rope which then opens the net and then they make a mess pulling hay out onto the ground. Same horse chewed through part of the rope which makes it even more challenging! Ughhhh horses.

My net is a round bale net from Hay Chix. When I fill the hay basket, I can open it up completely, and lay it around the top of the hay basket. When I have the hay set in the basket, I pull the net up over the hay, and tighten up the net. As I mentioned, I then tie the rope to one of the legs, and put a quick release in it. I would think that might show your cribber down, but they can be quite creative.

Thanks! It would be nice to be able to fill it with more hay. My net only holds 3 bales so I’m refilling it every other day!

Yes, the haychix round bale net holds at least 8 bales. I fill mine every 3-4 days in the winter (no grass) for three horses. Not bad!