Tell me about your Checkmate offspring!

I’m interested in breeding to him this coming spring, but perusing previous threads and on-line, I’m mostly seeing foal reports/pictures. Those of you who have 2/3/4yo’s by him, please chime in!

How has he improved your mare?
How has he passed along temperament?
Are his offspring more hunter / jumper / dressage in type?
Did mares catch on first try? did your repro vets comment on motility?
How easy have the young stock been to handle and start under saddle?

thanks all, and feel free to PM

I won’t be super helpful as I had the same questions as you when I was looking at a Checkmate baby (2017) earlier this year.
They had another Checkmate baby from the previous year (2016) on site as well.

The foal was a 10 mover, definitely suited for the hunter ring. Very brave, nice short back, neck tied in nicely, wide chest. Chestnut. Her left front did turn in ever so slightly so we passed, only because we wanted something to show in some line classes. She sold for $11,000 cnd the following week.

The yearling was also a very nice mover. He placed very well in some line classes as a weanling. He’s much finer then the other one, and a bay, but I didn’t get to see the mare that he was out of. Definitely a hunter. He seemed a little more standoffish and spookier.

Both were friendly, trailered, stood well for vet and farrier, etc.

Mine is only a weanling, but I love him to death. He has the best personality. He loves everything in life… he makes me smile every time I think about him. Brave doesn’t even begin to describe him. He’s super easy to deal with too… stands for bathes, brushing, farrier, etc. Beautiful mover… loads of suspension. His canter is dreamy. I’m planning to show him on the line next year. He toes out slightly – my farrier assures me that he’ll straighten up as his chest widens. His dam is a 17h TB… I’m expecting him to be about the same. He has good bone with long legs. It’s going to be a long 3 years waiting to sit on him! Chestnut colt with 3 stockings and a stripe.

Wanted to add to answer your questions:
Checkmate improved my mare’s gaits, neck, shortened her back, and improved on her feet.
He is a lovely, huntery mover, but I’m hoping he’ll be a jumper and derby horse.
She caught on the first try, despite inseminating her a day late due to a FedEx delay.
He was cocky before he was weaned (mom didn’t discipline him at all), but he’s an absolute sweetheart now. Did I mention how brave he is?

Following this thread as Checkmate is on my shortlist for my mare.

I was looking to purchase a very nice 4 year old Checkmate gelding in Florida. Sadly with the US/Can exchange, shipping etc it just did not make sense financially to do so (for me). But certainly his way of going and general calm and quiet demeanour certainly said “ammy” ride to me. I would breed to him if I had already not committed to two other stallions this year before I knew about him.

I love this stallion. I bred my maiden mare to him in 2015 and she caught on the first try, unfortunately, the foal ended up sideways and could not be delivered normally. After a long c-section, we were able to save the mare but not the foal. So I bred a different mare to him last year for a May 2018 foal. Fingers crossed but she took on the first time as well. (both times shipped fed ex to Colorado). Great breeder to work with. The foal that did not make it was very sweet, very leggy, pretty head. Bay with 4 white sox and a blaze. Hoping all will go better this time!!.

thanks everyone! I appreciate the feedback and plan to use him on one of my mares this spring!

I have a 5 yo just 3 months under saddle and has a wonderful temperament. She is a dream to work with. 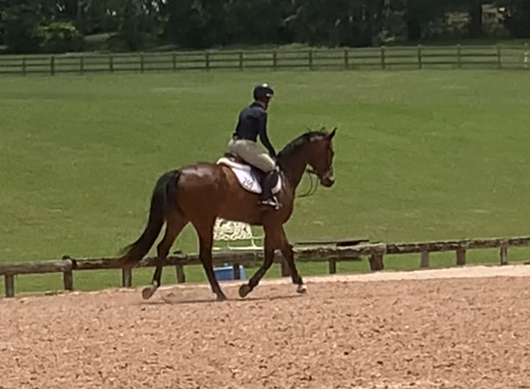