FYI I have not talked to the examining vet nor have the radiographs been reviewed by an outside vet yet. Hopefully, that will be done early next week.

I’m in the process of purchasing a yearling AQHA filly. I have seen the filly in person but just loose in the field since she wasn’t halter broke at that time. She has a bit of a knobby knee so x-rays were taken by the seller’s vet yesterday (rural area so limited vets). Filtered through seller, vet indicated that enlargement is most likely due to trauma such as a kick from another yearling or mare. Supposedly, vet said that this condition would not be a concern for her to purchase this filly.

I’m trying to educate myself as much as possible so that I can understand the condition and ask better questions of the vets. Does anyone have input on “physitis” in a yearling? Filly is said to be sound moving around the pasture and plays hard with the other youngsters. Will the excess bone growth be remodeled to normal if the inflammation can be quieted down? Any idea what the long term prognosis / complications might be? Enlargement is on the left knee. The right is for comparison. (Sorry for typos, my phone is giving me fits) 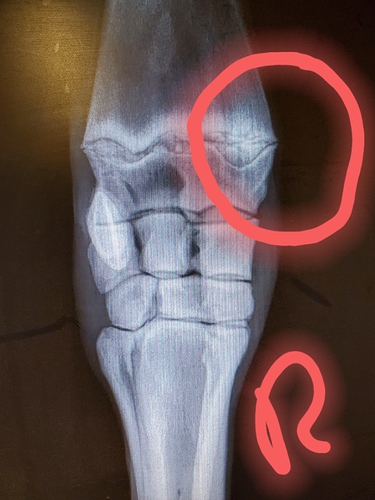 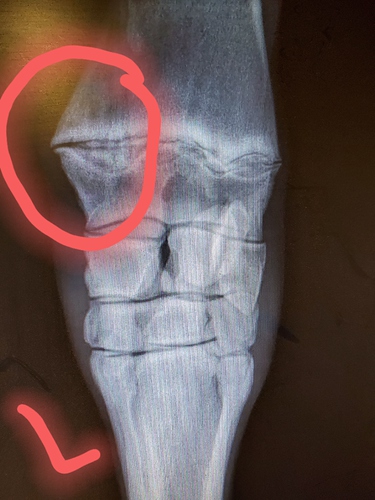 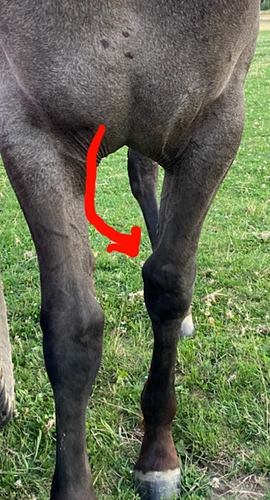 In looking up the word " physitis" I don’t see being kicked as a reason for it ?

Any way you can have a vet that is not going through the owner to evaluate the x-rays?

I am familiar with " Epiphysitis" in young horses but with that abnormality at the knee I sure would want an honest vet evaluation before going on. Sound or not.

Epiphiysitis and physitis are the same. Translated, it means the growth plate is irritated.

Also, yes. They do look normal in a few weeks, in all cases I’ve seen.

In looking up the word " physitis" I don’t see being kicked as a reason for it ?

Physitis is just inflammation of a physeal (growth) plate. Concussive physitis - lots of running on hard ground - can be a cause. Is there a root nutritional component to that? Not sure, but it’s recognized enough that any nutritional issues may be incidental, or just added to the severity.

Epiphysitis is an old term that is now more correctly physitis, and can affect any growth plate. Younger than a year it’s easily in the fetlock joints. At a year, it can be in the knees as the fetlocks are “closed”

If a yearling isn’t halter broke, how were her feet getting done? I’d want to know how the condition of the feet could have potentially contributed to some inappropriate forces on the knee.

As far as I know, her feet have never been done. Unfortunately, I don’t have any decent hoof pictures but nothing particularly jumped out at me. I know that’s not ideal but it’s what this breeder has chosen to do. Seems rather common within the western/stock horse breeding world. Maybe this is why I’ve had an awful time finding prospects that are straight legged.

She has been raised on roughly 10+ acres of irrigated pasture. Her companions have been others her age along with several pregnant mares. I wouldn’t consider the ground hard but I come from an area of hard packed clay and rock. The breeder has mentioned several times that the filly looks more like a 1.5-2 year old.

For diet - out 24/7 on irrigated pasture with access to basic grass hay (whatever that means), Haystack Special Blend pellets, rice bran pellets, whole oats, Redmond brand loose minerals. I think this mix is simply poured in a trough and the yearlings jostle for their portion, so weights of feed can’t really come into play. I don’t have a problem with the feed although my reading indicates that yearlings should be kept on the slighter leaner side.

I think the “traumatic” part comes from the inflammation/excess bone being apparent on only one knee. It’s thought that a blow to that knee set up inflammation that may be continually aggravated by hard play (and possibly weight). The vet said to confine her to a smaller paddock by herself for a bit. The breeder is also trying BEMER treatments on the area. I dunno … I’m just trying to make an informed decision.

The radiographs have been forwarded to a well-respected vet clinic for a 2nd opinion. I just won’t hear back until Tuesday at the earliest.

I did get a call from the examining vet this afternoon. She didn’t talk about any outside trauma, just noted that growth plate inflammation is not uncommon in big growthy horses. The feed rations don’t seem to be an issue. The vet said that regression of the excess bone growth is 50/50 so my impression is that we’re unlikely to return to normal. She did say that there is a small chance of arthritis, angular limb deformity, and damage to overlying tissue due to the excess bone. Of course, will this horse fall in that window? If it’s owned by me … probably.

So until the knees close, I would need to minimize impact on that joint. I have also looked into supplements such as Rejuvenaide. I’ve also heard mention of MSM. What to do? The seller has not indicated that purchase price is negotiable based on this. Her interpretation is that this isn’t of concern and it happens all the time in big fast-growing horses like TBs. Sigh.

Looking at the picture of the horse he looks kind of knock-kneed. Maybe it is just the lump that makes him look that way but I am not sure. If he is and that knee has been unequally loaded that might be part of the cause of the physitis. If the owner doesn’t think it is such a big deal and doesn’t want to address it I think I would pass for the time being. Maybe look again in 6 months to see if it has resolved. Unless it was really cheap I would not want to take on the remedial care.

Pass. Don’t buy into something that has a 50/50 shot at being a problem

Agree with JB. And, just scrolling through e.g. Dreamhorse, there seem to be quite a few young QHs for sale.

Physitis is just inflammation of a physeal (growth) plate. Concussive physitis - lots of running on hard ground - can be a cause. Is there a root nutritional component to that? Not sure, but it’s recognized enough that any nutritional issues may be incidental, or just added to the severity.

Epiphysitis is an old term that is now more correctly physitis, and can affect any growth plate. Younger than a year it’s easily in the fetlock joints. At a year, it can be in the knees as the fetlocks are “closed”

So in cases that are severe the bone abnormalities( like this horses knee) are normal? Can be reversed or will it always be abnormal?

To be honest I thought it was mostly related to growing too fast because of feeding. That is what we always heard, but I haven’t had a foal for a long time.

So in cases that are severe the bone abnormalities( like this horses knee) are normal? Can be reversed or will it always be abnormal?

“normal” as in normal for that situation.

How well they reverse entirely depends on how much damage there is, and how long that damage is allowed to continue. You can damage a growth plate beyond repair/recovery, either by intensity of the trauma, or duration of uncontrolled trauma or nutritional imbalance (or a fat fat foal, which would then come down to trauma)

To be honest I thought it was mostly related to growing too fast because of feeding. That is what we always heard, but I haven’t had a foal for a long time.

that’s a common situation, that and nutritional imbalances. Physical trauma is less common.

I bought a weanling QH filly that had physitis in both knees. She was born slightly bench kneed, and the pressure on the medial sides caused a little physitis. She was never lame. I did take x-rays and did two 30 day rounds of previcox with her and I fed her pelleted rejuvenade for 6 months until she was a year and 8 months. I let her have turnout with my other horses.

I think the previcox worked more than the rejuvenade, but hey, if it helped a little, I’m ok with paying for it.
As she was growing, she did start to pigeon toe a little, my farrier called it postural pigeon toeing as she was trying to not pass her weight over the inside of the knee, so she would compensate by loading the inside heel to the outside toe. (Normal conformation pigeon toe loads the outside heel to outside toe) With balancing the hoof, it fixed 90% of it. I also ponied her after the previcox on light trails. Miles of going in a straight line helped straighten the tendons. I think this more than either helped her the most.

Filly is now 2, and shows no lameness. I would say that she still has slight pigeon toeing as she’ll load her feet a little unevenly, but it takes a couple extra swipes of the rasp to balance.

Will this filly be a top performance prospect? Probably not. But I don’t want her for that anyway. This filly’s brain was well worth the risk and the extra maintenance, she’s really safe to be around and is just dead calm and not bothered by much. As a general pleasure horse & trails, she’ll absolutely rock her job.

I weighed the physical constraints with my goals for this horse and decided she was worth it anyway…mostly because her brain is just that awesome. You gotta see what your goals are and if it’s not worth it, then pass. If this filly was a dink in the brain, I would have passed. 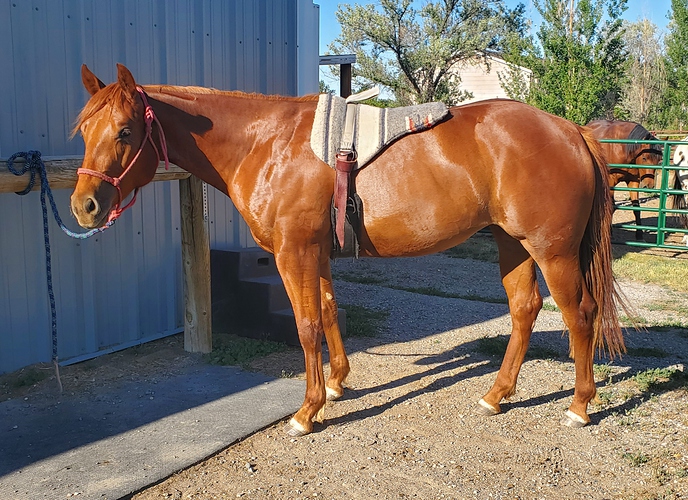