Mare and foal at the vets presently, have you had a foal that is uninspired to stand? He needs to be encouraged to get up and drink. Once he’s already up he (now) nurses great. But without encouragement he’s happy to just lay down. Vet says not don’t a dummy foal, vitals are within normal limits. IGG levels above 800. He did have plasma and is currently on excenel.

Long story short, I acquired a pregnant maiden mare in February. Breeding date April 23. Foaled yesterday morning between 330 & 4 am. I was out there at 4 and the foal was still completely wet. Foal attempted to stand but wasn’t getting up on his own after 1.5 hours. Phone call to vet. Recommended some things to try but if not working bring him in. By 630 we were at vets, milked dam, and he drank off the bottle really well but wouldn’t latch the teat. Tongue mildly swollen. By the time I left he was what the vet said a 2 hour old foal, not the 6 hour foal he actually was. He didn’t really latch the teat for 9 hours.

Anyone with similar experience? Outcome? I’m not overly optimistic but don’t want to be too negative either.

I’d be pretty worried. Glad he can/will stand, nurse, etc, but everything is abnormal about his rate of achievement thus far and his continued lethargic state is fairly concerning. Normal foals don’t need to be encouraged to stand/nurse, much less need continued assistance at 24+ hours. He very well might be a dummy. Tongue abnormalities (protruding or “swollen”) are often noted. Also, one of the many heart breaking things about dummy foals (aka neonatal maladjustment syndrome aka neonatal encephalopathy aka whatever…) is the delayed onset of serious signs. These foals often seem normal or only mildly abnormal for the first 24-48 hours before seriously decompensating.

Sorry to echo your own anxieties. But please know that you’ve everything possible for him so far including rushing him to the vet immediately. Glad he’s hospitalized now. How often are they monitoring him? Can they provide the level of very intensive care he would need if he does become very critical/unstable? If not, then would you consider seeking and financing that next level of care for him, if necessary? If so, you might should consider shipping him now while he is relatively stable.

I had one sort of like what you are describing. He had a meconium impaction and was very uncomfortable for the first few days of his life. It was fairly obvious that he had the impaction because he was straining to poop, but perhaps yours is backed up and just not trying hard to pass the meconium?

I’d be concerned and wouldn’t feel comfortable leaving my mare/foal with a vet that also wasn’t very concerned. Maybe worth trying the squeeze, even if the vet doesn’t think he’s a dummy? Have they given an enema?
I agree with Freshman, I’d ship to a big state clinic now while he’s relatively stable.
When I had a filly born with lots of issues, she spent the first several weeks of her life in the NC State ICU. She literally had someone in the stall with her every single minute – like if they wanted to use the bathroom, they had to wait till someone could come sit in and replace them. She’s a precocious 5yo now, but only had about 15% chance of survival when she was admitted. I attribute our success, in part, to the extremely vigilant and attentive care she got the first hours and days of her life.

Thanks for the replies.
He stayed at vet hospital for 36 hours. He was still not getting up regularly but other than that had normal mentation, normal behavior when up. He did have multiple enemas there. I am a relatively competent small animal vet tech and have worked emergency/intensive care in small animal medicine, so I felt ‘comfortable’ taking him home to provide care. He’s been now getting up on his own routinely. I got up every 2 hours overnight and can check them more often through the day.
He hadn’t passed feces within first 12 hours at home so I was instructed to continue enemas and after just 1 he’s passed stool 4 times. He continues to nurse well, urinating normally. He will be on antibiotics for 8 days, gastrogard for 5 days and flunuxin for 2 days. Vitals continue to be WNL.

Unfortunately finances do play a factor in further treatment/hospitalization.

I will continue to monitor closely and if things turn for the worse I won’t let him suffer.

Picture of the little bugger, who won’t get a name until at least 7+ days old… 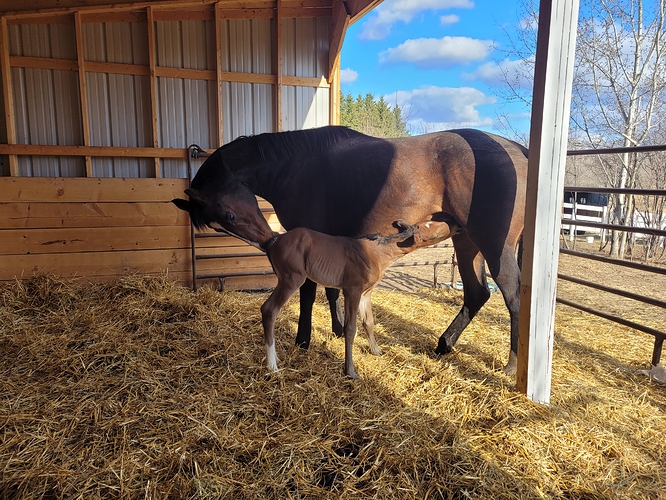 He is adorable!! Fingers crossed that he keeps trending up!!

Sending healing wishes from Colorado.
Your mare and foal are lovely.

Hope he continues to improve, sending good vibes your way!

Glad he’s hanging in there! He’s almost on the other side of time window for which classic delayed onset “dummy foal” decline and decompensation normally occurs. He’s definitely a weird and worrisome kid, but hopefully he’s on the right track now.

This foal would be little FPT/septic dead man if you hadn’t initiated plasma transfusion and other supportive care so rapidly after birth. Also I think it is very reasonable to decline referral/potential heroic care measures. Those little toads crash and burn at an incredible rate. And once they do become metabolically deranged, etc, they don’t often show any great resiliency, IME, even in the face of the most advanced intensive care measures. While I’m glad such resources exist, in reality, such care actually often only delays the inevitable at huge financial and emotional expense in the end.

Fingers crossed for your little dude. Let us know how he does!

I would absolutely do the Madigan Squeeze on him. They don’t have to be obviously Dummy to be Dummy.

What is the footing like under the straw? Does he just not feel confident in his ability to get up?

He’s actually been getting up on my straw better than he was at the vet with rubber mats. I just have packed dirt/sand mix under straw. He’s gotten up very routinely throughout the day today. I can see them from my kitchen window.
He has actually shown burst of energy tonight. But I still think it could go either way at this point. I’ve had to do another enema and I’ve heard him cough a couple times which is a huge concern but despite that he seems to be improving.

It’s been 11 years since my last foal so I don’t have much experience about normal foal behavior. Something about him still seems off.

I asked the vet about squeezing him, I don’t think they did. I do trust their judgement, however in looking more into it, it doesn’t look like there would be any reason not to try it. I couldn’t find anywhere that it isn’t effective after a certain amount of time, but I would assume sooner, rather than later as he approaches 72 hours old.

They’ve done bloodwork on him? I had an aspiration pneumonia last year, and that thought popped into mind when you said he was coughing.

My orphan this year was a little “sleepy” the first 36hrs. He had a decent suckle reflex, and wanted to eat, but was not as bright and alert as normal. Very quiet, resting a lot, able to get up but preferred to stay down. My vet felt he was likely a little bit hypoxic, a little on the “dummy spectrum” and recommended ozone therapy.

I had never seen this before, but it worked as she described. O3 was injected into him IV, and about 7 hours later (she said it would take 6 to 8 hours to see improvement) it was like a fog had lifted. He was alert and bouncy, talkative, and an active participant in his life.

Definitely recommend this if your vet has the ability to perform treatment. It was less than $100.

How is your foal doing @CdnRider?

Update: we are now 5 days old, and we have 2 speeds stop and GO!
Between 60 and 72 hours he really started to “wake up” in the energy department. His vitals continue to be WNL and he’s become very difficult to medicate, not a fan of twice a day IM injections. I’m taking his displeasure as a good thing. I feel at this point he is pretty close to most other foals in terms of possible postpartum complications. 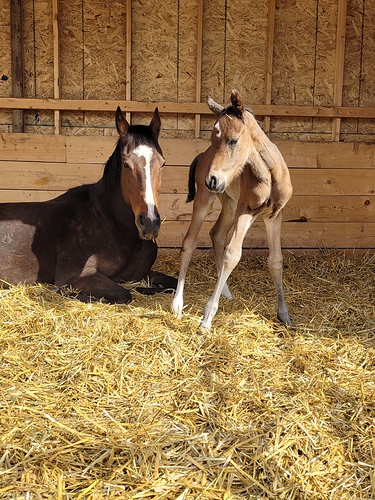 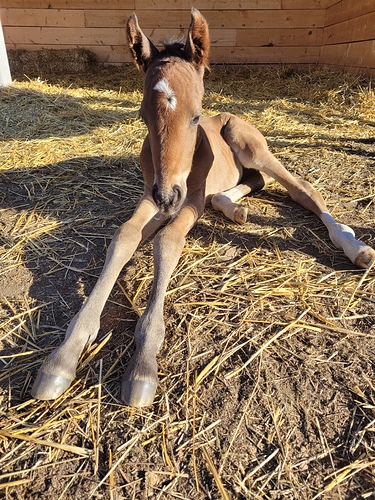 Good news.Glad to hear it!

Yay! What a cutie! He is buckskin, or is the light just washing out his color?

So glad he is doing better! Hang in there, little guy. We are all cheering for you!