I can’t come up with a good title for this. Anyway. I have two big drafts. Based on what we are doing on the farm, I anticipate putting their full work harness on them on a daily basis. That didn’t used to be an issue, but I’m not 20. Or 30. Or 40. And those steel hames and work harness britching isn’t getting Lighter. And I have one whole side of my body that is getting less and less happy with…well anything. And I am only 5’2", with almost 18 hand horses.
So, I was thinking…‘service bays for horses’. Can anyone see a hideous safety issue with a cross tie set (using concreted telephone poles), the horses at ground level on a 30-36 inch wide area, and on both sides a raised platform at least a foot in height running the length of the horse? Sort of like two low, long mounting blocks on either side? These horses would walk in and back out, but I would make it so that they could walk through if needed. Cross tie’s at only one end.
I’m modeling it on the therapeutic riding stables, which often have walk through mounting blocks. But they tend to be taller. I don’t need or want more than a foot, but perhaps a foot and a half might be better. Thoughts?
Title changed for clarity: no grooming or foot care, just getting a harness on a draft.

If they are good for mounting blocks, I don’t see why they would not get used to it. Cross tie them and groom them on a mounting block on each side as training for it?

I use a both a 2 step mounting block and a standing stool that has an 18 inch by 24 inch platform to reach my Clydesdale. I have accidentally stepped off of it into air many times, twisted ankles, knees, and a couple of falls. if you plan a platform for you on both sides, make sure it is wide, at least 2 feet, and better three feet wide. The safety issue is for you, not the horse.

And, this next is only semi-facetious. What about something similar to an old school gas station grease pit? You are on ground level and the horse is standing in a foot deep rectangular well, with or without ramped enter and exit ends.

I don’t see a problem with it, assuming your horses are good in cross ties. I’d make it higher than one foot high so that if they do take a sideways step, they’ll be less likely to actually step on it or on the edge of it.

You know I started with the grease pit idea! But, I can’t figure out a good way to control drainage in the area for that level of pit. Especially in the winter. I’d love to have it under cover, but a whole lot of other stuff has priority if and when the new barn gets built!
Yes, the ‘stepping back’ off the platform issue is the one that bugs me. I’m thinking a railing might be a good idea…and that the right hand bay only gets used if horses are in both so that the center platform is only in use really when both are being hitched…I am envisioning three platforms with two horse bays.
@Mango20 right, I should measure the level that Sunny (the young one) can casually get his feet up over and work with that, good thought.
It all seems a little silly, but I just can’t get the harness up and over easily these days! It ended up in the mud yesterday, with Buddy patiently standing there as I untangled it. I could feel him rolling his eyes. And it isn’t fair to them to be shoving and poking them with it.

We hung a hook and block and tackle (pulley system) from the barn rafters to lift the harness on to the draft horse. The harness hung up there when not used. Even the kids could harness using it.

I like the block and tackle idea better than a platform.

But if using a platform, rely on training and not on height as a deterrent. My little 16hh mare can easily step up onto 2’+ tall landscaping rocks. We won’t talk about the embarrassment that caused me when I stepped up to mount her after a stop at a winery and she casually climbed up to join me. “No you are not allowed to come up here with me! These are elegant, landscaped gardens!!!”

That said, she got over that and I use a wheelchair ramp to mount her every day in the winter because it’s right there and easier than the mounting block. Yes, I am that lazy

Also with the platform and a narrow horse area, you’ve got the issue of foot care. Are you going to squish down in there with them to pick feet? Pick feet elsewhere? Ask them to lift up to you?

I thought about railings on the platforms for safety. They would obstruct your ability to approach directly from the sides. But if it were me I’d rather have safety rails than not.

And speaking of mounting platforms, I built the fixed ones at my place 4 steps high. It makes for a mounting block as long as a horse, including steps on both ends, but I love being able to step onto a horse and settle down in the saddle without having a foot in a stirrup. Horses seem to appreciate it too as the saddle doesn’t get rotated to the side. But the real pleasure is just stepping off after riding. No more sliding off or jumping off and making hard landings on arthritic joints.

My problem (and the kid’s problem) with harnessing our huge draft was the weight of the leather New England Logging Harness (purchased used for $80). With breeching, tugs, and chains, it weighed more than we could lift. At best I could put 1/3 on at a time and sort of slide the rest after --but generally the first part would slide off the other side before I could get the rest up --the hames were the heaviest --solid iron I’m guessing. By fastening a strap around the breeching with a ring, one around the turret with a ring, and one around the strap that connected the hames, we could lower the hook, catch all three rings, and gently pull the harness up to the rafters. Charlie-the-Percheron learned quickly to stand under the harness and wait until it was fastened. He also lowered his head for the collar and bridle so that even the 9 year old could put those on. Miss that horse. He died in 2016 about this time. The harness went to a neighbor who has drafts. The horse DDS uses the pulley to raise the heads of the horses to do their teeth.

BUT the one and only time I took Charlie to a draft show (being an Amish bred plow horse, he didn’t win anything, but the kids had fun taking him) I saw the professional grooms using this type of steps to braid and harness. I doubt I could have carried Charlie’s harness up the steps, but might work for you. FYI those fancy show harness I saw were in three pieces that all clipped together so the horse could be harnessed with less strength. I don’t think it would be safe for the kind of work we did with Charlie --we really did move logs and harrow with him. 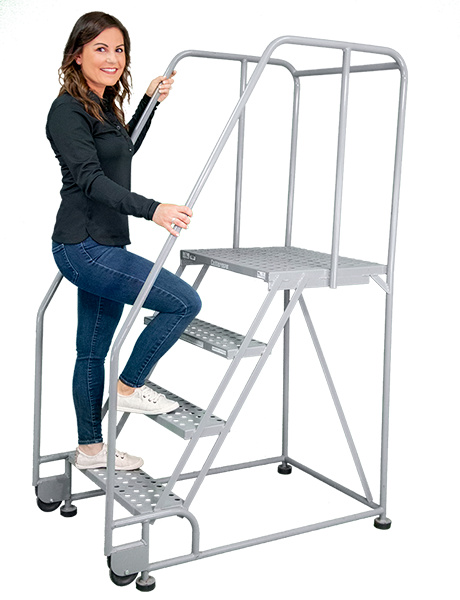 @sascha good question. Foot care and grooming already happen elsewhere. This would be strictly ‘work’.
@Foxglove yes! The harnesses in question are heavy duty (logging/pulling) Yankee D-rings. And even the modern biothane ends up being very heavy once all that steel and reinforcement gets involved. Those chain tugs and the hames are solid! Because they are D-rings I could break them in half since the tugs are split at the D. But, that adds several rub points when modifying the harness in order to avoid weakening it, which is a negative. Still, I do know several people who went that way as they got older. That is a possibility.
I’ve seen the pulley…wish that I had an indoor space to work with!

wish that I had an indoor space to work with!

If you’re going to be putting in heavy duty poles for crossties, why not add a joining beam over top of them for a pulley arrangement?

Having had to use these ladders (and their much taller siblings) for work - I would not recommend trying to haul harnesses up and down. I felt precarious moving archival .5 ft and 1 ft boxes up and down. There’s just so much wobble. Caveat - I hate heights as a rule anyway

This sounds like a clever solution. I personally would probably back them in and walk them out. That was if something happens unexpectedly they can panic forward and out, versus backwards/sideways.

I’m 5’1’’ with a large horse so I would love this even just to groom and blanket!

It sounds similar to the set up a therapeutic riding program I volunteered with had. It was set up for the horse to walk through with platforms on each side, one with a wheelchair ramp, the other just stairs (each with railings) to assist the riders getting into the saddle with assistance. The horses were THOROUGHLY trained to being messed with in the platform, but they were a pretty unflappable lot to start with.

That is where I got the idea from! I’m thinking for the long term here, it just seems like it may be the best approach, assuming I actually build it higher than seems at first necessary.

They use such things for disabled riders in programs. Train them to get used to it and it’s fine.