So I just finished reading this article on COTH 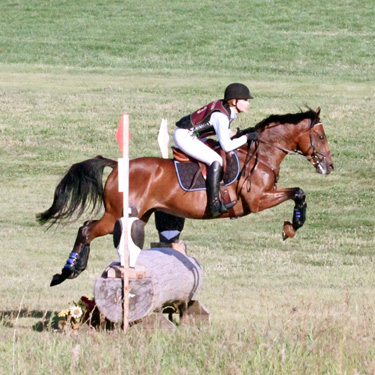 I woke up before my alarm was set to go off at 6 a.m., with my cross-country course running nervously on a loop through my head. Cairo woke up hungry and ready to rock and roll. If I haven’t already mentioned, she has the appetite of an equine...

From what I gather, she is taking part in a three day event; can someone explain to me what the other parts of this day’s event were - the steeplechase/trotting parts?

XC I understood but the rest was totally new to me - would love to have some light shed so I understand!

The discipline originates from the Cavalry days:

Dressage - create an obedient horse that goes where asked when asked

Cross country - self explanatory, bold enough to jump huge obstacles, strong and enduring. The modern format has been stripped of the road and steeple chase phase.

Stadium jumping - after the rigors of the cross country the horse needs to be obedient and nimble enough to jump obstacles that come down - unlike the XC ones.

This is for the XC day on a 3 day. If it is a 1 day it just is Dressage, XC and Stadium

Historically, the so-called ‘long format’ endurance test included four phases: Phases A and C, Roads and Tracks; Phase B, the Steeplechase; and Phase D, the Cross-Country. Each phase had to be completed in a set time. Phase A of the roads and tracks was a warming-up period, usually done at a brisk trot, for the purpose of relaxing and loosening up both horse and rider. Phase A led directly to the start for Phase B, the steeplechase. This phase was ridden at a strong gallop to achieve an average speed of 24 miles per hour with six to eight jumps. At the end of the steeplechase, the horse and rider went directly into Phase C, the second roads and tracks. This phase was very important for allowing the horse to relax and recover and to get his wind back to normal. The pace is usually a quiet trot, interspersed with periods of walking and an occasional relaxed canter. Some riders also dismounted and ran next to their horse during this section of the test.

The end of Phase C brought the pair to the ten-minute Vet Box prior to starting out on Phase D, the cross-country. Here the horse had a compulsory ten-minute rest allowing a panel of judges and veterinarians to check the horse’s temperature, pulse, respiration and soundness. If, in the opinion of the panel, the horse was not fit or sound enough to continue, it was withdrawn from the competition. At this time the horse was sponged down, the tack adjusted and they were prepared for the next phase. Those passing the inspection went to the start box ready for the most exciting phase of the whole endurance test.

The majority of modern eventing no longer runs the long format, instead now running a ‘short format’, which excludes phases A, B and C and means the endurance element is solely the cross-country course. However, there are a few long format events in the United States, at the one-star level.

She was taking part in the Novice 3-day at the Rebecca Farm horse trial. The Novice and Training 3-day divisions are based on the old “long-format” style of eventing (now sadly defunct at the upper levels).

In this format, the cross-country day has 4 phases - A,B,C,D - rather than the current single xc track. Phase A is part of “roads and tracks” - where the horse/rider ride out through the country, but are not jumping. They have to go through mandatory flags, they will mostly be trotting, and phase A ends at the start of phase B. Phase B is steeplechase. At the end of steeplechase, riders/horses continue straight on to Phase C - another roads and tracks phase. At the end of C, riders enter the 10-minute box. They dismount, their support crew tends to the horse, the vets check the horse’s TPR, then the rider is back in the tack and heads out onto phase D - the actual XC course. Time penalties can be accrued on A, B, and C - and are combined with any penalties incurred in phase D.

Dressage and SJ are the same as at a short-format event, though a training 3-day will take place over 3 (or maybe 4) days, with SJ day being the last day. There are also jogs before dressage and on the morning of SJ day.

At one time Three day Events were only for competitors at Preliminary and above and they were all long format. There were no Advanced horse trials one day events… When you went Advanced, it was long format three day.

Triple - Google and Youtube are your friends if you really want to bone up on this.

What year did the stop the long format at major events? I could swear the first year I went to Rolex it was still long format. But it is possible I dreamed that.

Thanks everyone, curiosity satiated

Merrygoround, I think I’ve got all I need to know; was just pure curiosity as I had never heard of the “long format” concept - you learn something new everyday!

When I was a kid, learning to ride in Vermont, everything was long format.

It made perfect sense to us, because, at that time, there were plenty of dirt roads to train on, and that’s just what we did as a matter of course.

Needless to say, people ride and train very differently now, so I’m not surprised that Roads and Tracks seems rather alien . . . though I still think it’s unfortunate. Horses seemed both fitter and saner back then, and it really was wonderful to feel like you had the whole wide world to ride in.

Not sure about here in US, but last long-format Badminton was 2005. I know because I was thrilled to get there and see it.