This is a long post, and please feel free to skip—but it might be of interest to some.

DH is a hiker and during our 33-year marriage I have faithfully hiked with him through 45 National Parks, another 76 other National Park Service venues, and 58 National Forests. Nearly died of heat stoke twice (Grand Canyon and Canyon of the Ancients).

To my amazement (he is not horsey) he suggested a short vacay to Kentucky, visiting horsey places. So last week, off we went.

First day we visited Claiborne: Great tour of stallion barn and adjacent areas; Guide was one of the stallion managers; Run Happy looked tough/no touch, but I got to feed peppermints to Mastery and War Front (pictured). The cemetery is a Hall of Fame of TB racing in the 20th century—from Gallant Fox to Secretariat. 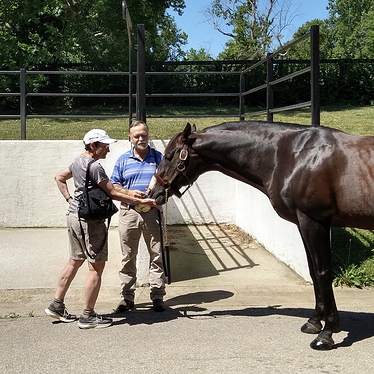 Next day, Winstar: We took the extended two-hour tour, first hour in the stallion barn. Got to pet Consitution; saw Tiznow (pensioned but kept in his old stall), Paynter, et.al. The second hour we were driven all over the farm, seeing mares and colts. Lovely. 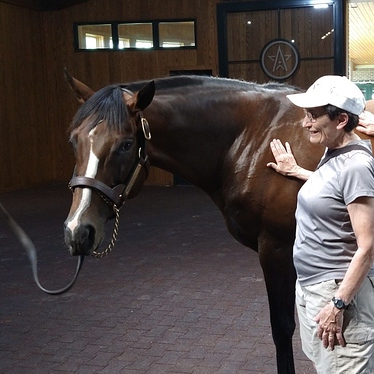 IMG_20220701_114524202743×743 129 KB
Last visit, Coolmore America/Ashford Stud: How lucky were we? Pharaoh and Justify are not shuttling this year, so they were shown. Very formal, we were kept behind low barricades, but oh wow oh wow oh wow. Two triple crown winners!
Pharaoh looks wonderful. It was impossible to get good conformation shots because he and Justify were not brought out of the barn (too hot) and were mostly silhouetted against an open door. 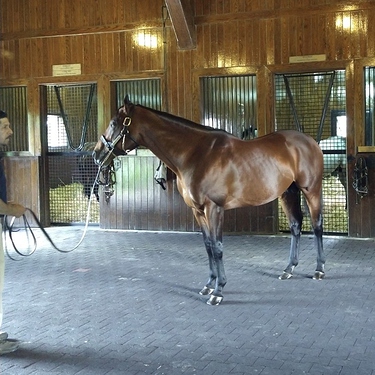 IMG_20220701_144605480812×812 203 KB
Justify also looked great, although maybe not his feet. They are barefoot for breeding season and just got shoes—his toes looked chipped up and he had pronounced dishes in front. Well, he doesn’t need them to race anymore, and I am sure the Coolmore people know what they are doing. 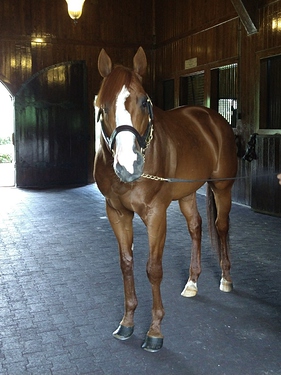 Third day, we went to Old Friends.
First, we looked for Where’s My White’s memorial—it was not there. I asked, without mentioning details. They are way behind because of Covid—couldn’t get workers or raw materials. A couple of horses who passed are awaiting their memorials too, just have stakes for now.
We were given big bags of carrots and taken around. Fed Sarava, Birdstone, Patch, Stormy Liberal, Little Mike, among others. Of course, the star of the show is Silver Charm. He needs his carrots shredded (few teeth) but had no trouble eating them. We were told he does not like his face touched but we could pet his shoulder. There were zero horse people on the tour, everyone hung back, so I took my chance. I not only petted his shoulder, I gave his withers a good scratch. He loved it.

There were very few people on the tours—Claiborne and Gainesway maybe about 10; Winstar exactly 4 (!), DH and I and another couple. Coolmore and Old Friends had the most—maybe 20? And very few horse people—mostly just tourists visiting Kentucky. The other couple at Winstar professed to knowing nothing about horses. Probably more during Derby Week and during the sales?

Then we went to the Kentucky Horse Park. It was OK, but mostly for the general public, which is of course fine. There are various short shows all day long.
We went to the Hall of Champions—horses that are supposed to exemplify excellence for their breed. The TBs are Funny Cide and Point Given. There are two shows/day, and the horses are led out and walked around a small ring for 5 minutes or so, with an announcer extolling their careers and with a video running. I think Point Given and Funny Cide alternate–at least for us Point Given was brought out and Funny Cide was napping in his stall. This was the only time I was not entirely happy with what I saw. The horses are in nice stalls, obviously well cared for, turned out regularly (we asked), and have easy gigs. But there was a sideshow atmosphere. It seemed undignified. I think FC and PG somehow deserve better. (I am comparing to Tiznow’s and Silver Charm’s lives.). Just my humble opinion of course, and completely irrational.
Point Given: 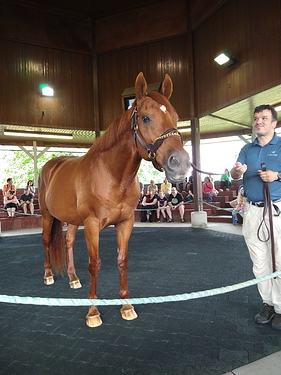 Back to Louisville. Visited the Kentucky Derby Museum at Churchill Downs. Lots of memorabilia and videos. I always wondered about the “plate” that Pharaoh raced in most of his career. Here are his shoes: 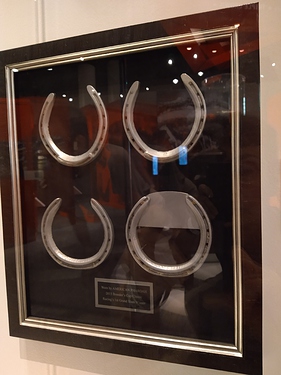 What a wonderful visit! I LOVE Kentucky. The first time I went down, I remember pulling the car off of the road on Circle 4, and just staring at the limestone stacked walls, and the gorgeous huge lush Bluegrass pastures. Thanks so much!

@Maythehorsebewithme, it looks like a great trip. Thanks for the pictures!

Thanks for sharing your experience! I have been on farm tours twice (once as a teenager, once as an adult). I have very fond memories and I love hearing about others who visit the farms.

I’m bummed to hear our memorial brick has not been placed. That was a good bit of money to them, and while I understand they are busy and labor shortages, it’s been several months. Do you think I need to follow up?

Thanks for the trip report

I was just posting in Off Topic about going to Lexington for a weekend with a non-horsey DH. Really helpful details!

You might want to follow-up. They seem to depend heavily on volunteers, which may be another cause of the delay, as volunteers might have been scarce at the height of the pandemic.

I saw your post on Off Topic. My non-horsey DH became rather fascinated with the scope of the industry–the number of farms, size of the farms, number of horses. Retired math teacher–he started multiplying the specific stud fees times the number of matings times the number of stallions. Came up with truly impressive numbers. And I told him he was not accounting for yearling and older horse sales.

I also impressed upon him that the average human being is more likely to lose than make money on horses.

Also, I just noticed you mention weekend–most of the stud farms are, I think, closed on weekends. The Horse Park and Old Friends are open. Check the websites.

Thank you for the fun trip!