Hey everyone! I’m having a bit of trouble figuring out what is going on with my filly’s fetlock. She’s has a small patch of scaly/scabby skin right on the outside of her front left fetlock. I thought it was just a dry patch, but now it seems to be spreading. I’m considering having the vet come out to take a look at it, but wanted to pick the collective COTH brain first. I took pictures to see if anyone can recognize it.

The patch doesn’t look like scratches or mud rash or anything else I’ve ever seen. It started out the size of a quarter and just looked like dry skin. She’s had it since I got her (back in January). I figured she’d nicked herself shipping down or that it was a scab that had fallen off. When hair never grew back I became concerned it was proud flesh, but the patch never got bigger. She’s not lame on that leg, doesn’t mind people messing with it, the flesh isn’t hot, no blood, nothing! When I had the vet out I had them look at her leg and they said it was fine.

I eventually figured it had probably just scarred over and that be the end of it. I made sure to fly spray her leg over the summer to keep bugs off and applied some soothing balm to prevent the skin from chapping. That was the end of it until today. The patch seems to have grown bigger and moved sideways. It still isn’t bleeding or hot, but I don’t want this to continue. I sprayed some MicroTek on it but left it at that.

Given how long it went without changing or spreading, I don’t think it is a bacterial or fungal issue, but I frankly have no idea what could be causing this. 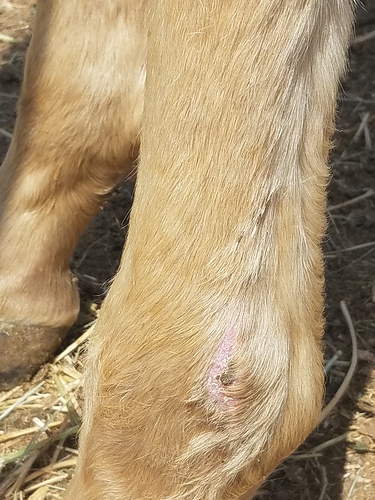 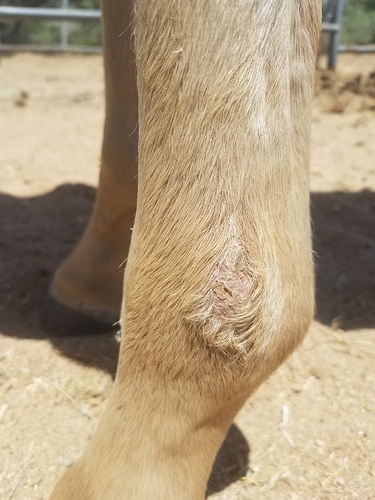 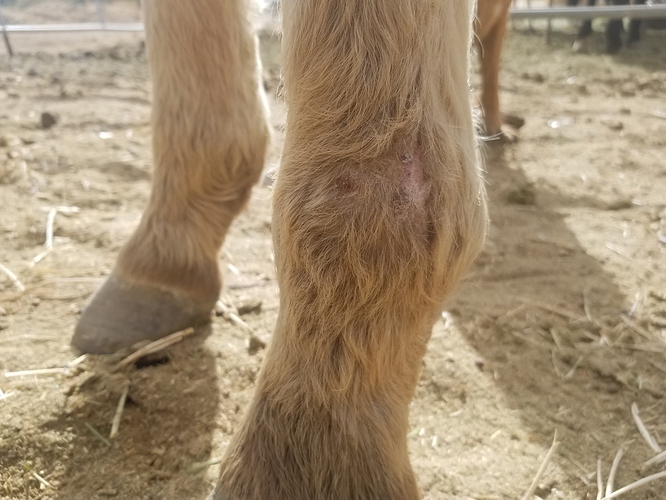 That looks like a bedsore. She’s rubbing it getting up and down, or rubbing it when she reaches under the fence to try to snag little bits of grass on the other side.

They make special bedsore boots, but what I’ve found to be the easiest is just putting on bellboots upside down. Easy enough to give that a try and see if it goes away.

Thank you! I’ll try the bell boot idea this week.