Well, this is different 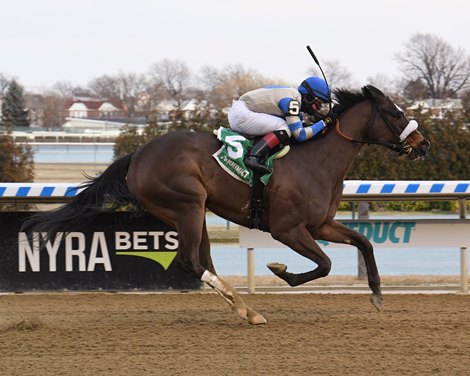 A New York-bred stakes winner that sold for $150,000 at Keeneland as a broodmare prospect is actually a male, according to a lawsuit pending in Fayette Circuit Court in Lexington.

S/he is a stakes winner of $300k, racing against fillies.

Gosh, what a situation no one wants to be in. I bet that vet is in hot water. How do they screen for broodmare soundness at the sales typically? Routine cytology and palp? Or is it something else?

If it was just cytology and/or palpitation, I wonder if it was something easily missed…

If palpation, how would a vet miss the absence of ovaries?

I read this elsewhere and I too wondered what breeding sound exam included. How is a mare considered breeding sound with no ovaries and why does the exam not make sure they have them/hormones necessary to be bred?

Possibly s/he is chimera?

ETA: I know chimeras are really rare, but this case makes me wonder. I don’t think it falls into the hermaphrodite category.

This is fascinating, and serves as an example of the various nuances present in mammals. I think there’s a syndrome similar to this in people, where individuals appear wholly female yet lack fully developed and fully functional reproductive organs. And they have xy chromosomes. I think it has something to do with either the lack or over-production of androgen (?) in utero.

All this aside, I find it hard to believe that the certifying vet is off the hook, despite the apparent time frame that had expired for any claims of misrepresentation. At least I think that’s the way I understand it. That just doesn’t seem right.

Bottom line: Was the pre-sale palpation so cursory and rushed that the lack of ovaries was missed?

As I understand it, the consignor is off the hook, but Dr.Wolfsdorf and Hagyard are not.

What a bizarre mistake by Dr.Wolfsdorf. Makes one wonder if the exam was actually performed.
Shocking either way.

Wonder what is eventually going to happen to the horse? Buyer wants out (understandably, as was looking for a broodmare), seller probably does not want horse back, horse may be done with racing career.

I wonder if this is something like a freemartin in cows.
A freemartin is the female in a male and female set of twins, almost always the female has incomplete reproductive organs. They usually don’t get kept and get sent along with the veal calves.
If I remember correctly this happens because the male hormones develop first and affect the females development.

But does a freemartin have “xy” chromosomes? That’s what this horse has. DNA maps male, but outwardly appears female. No ovaries, but I assume there’s a vulva (otherwise someone really whiffed on the repro exam). If there were testicles, even undescended, surely there would be behavioral evidence.

Kept True, who after being sold as a broodmare prospect at the 2021 Keeneland January Sale, was later determined by a veterinarian to lack ovaries and have the chromosomes of a male horse, is living happily in retirement, according to her owner.

Hopefully sold as a sport horse with full disclosure. It doesn’t sound like there are any soundness issues that would prevent a different career.

I would think the liability would lie with the vet on this one. And I would assume their insurance covers things like this.

That is my guess as well. I think the buyer will get at least most of their money back from the vet’s insurance. I do worry about where the horse will end up. Hopefully it is sound an has a suitable temperament to make a riding horse.

Sort of an update. I thought it was interesting that her owner still calls her her. https://www.bloodhorse.com/horse-racing/articles/259101/stakes-winning-kept-true-living-happily-in-retirement?fbclid=IwAR2hlp3zrh4C4JWDZqTN31hBKddRw7CyatHHsWlzhZ9lxdogGZfXq11dQvc&fs=e&s=cl

Looks like the horse will have a good life regardless (per last-posted article).

As of now the horse is out in a field at the owners farm. I know their farm manager. The owners have a large rescue/retirement farm, so if the horse isn’t suitable for riding and being rehomed it will likely have a home for life. No worries it will be shipped off.

For anyone curious, this is called androgen insensitivity syndrome. The animal is genetically male, but insensitive to the masculinizing hormones, so appears female (because all embryos “start” female.)

(Lots of info out there, for those interested in learning more.)

I thought it was interesting that her owner still calls her her.

I have a cat who went into his castration and came out spayed. I was never able to adapt and still call him “he” 14 years later. Habit is hard to break, though my parents call him “she”, so conversations about him can get confusing quickly.