What happens to CEM test-breeding foals?

So I’m learning about importing horses from Europe.

It sounds like stallions of breeding age must breed two mares during their quarantine as part of the CEM testing protocol.

What happens to the (I presume) resulting foals? Who owns them? Are stallion owners compensated if the foals are sold? Where do the test mares come from? Do they abort the mares?

These by-product foals could be of interest to sport horse folks… just wondering about all this!

I Googled this. It seems a little old fashioned to breed a stallion and see if the mare ends up catching a venereal disease. I’m going to assume that they already have the technology to be sure the stallions are not infected. I don’t see why the resulting foals wouldn’t be nice enough depending on what mares they risk for this.

There are no foals produced from the CEM live cover stallion test protocols. CEM quarantine facilities maintain a population of spayed mares to use for this purpose.

Thank you! That makes perfect sense, I appreciate the information.

I don’t think they do PMU in Europe. And my impression is that mares don’t feel particularly violated by live cover. Of course spayed means much less hormones. Anyhow the 2 (unspayed) mares I look after spend a great deal of energy in trying to explain the Facts of Life to their gelding buddies. Both had foals through live cover in the past and would love to do so again :).

There’s lots of interesting stuff in human assisted high tech breeding operations. Teaser mares, surrogate mothers, egg extraction, sperm collection. If you have a strong sense of ick factor around animal sexuality (which is by and large an emotional response out of one’s control), equine repro tech is not going to be your field of choice!

Two mares are used for each stallion undergoing CEM protocols. Each mare is covered one time per stallion test. Then undergoes a series of several swab/test/cultures for a 3 week period. Mares obviously cannot be used for more than one stallion at a time.

Live cover breeding is not without risks, of course, and the impact on the mare of repeated invasive culture/swabbing protocols are worth considering. Outside of the TB race industry, most high end mares (and their owners) are used to AI only breeding protocols now and live cover is considered archaic. The truth lies somewhere in between, of course. TB mares undergo live cover at least once per season. Both live cover and AI mares that are bred undergo many invasive procedures themselves that we never question at all now. Mares being bred undergo pre-season BSE cultures, then repeated and sometimes daily pre-insemination rectal palpations/rectal ultrasounds, then AI procedure itself, and then more rectal ultrasounds to confirm pregnancy. If she does not become pregnant, mares undergo the same for another cycle or two or even 3 until the owner quits for the season. If pregnant, then more palpations/ultrasounds are carried out at certain points throughout gestation until she foals out. All privately owned mares undergo these things for at least one cycle and one gestation for every planned breeding. Then are subject to live foaling risks. Even ET donor mares that don’t carry foals beyond a few days are subjected multiple similar invasive processes.

Breeding mares for foals this way sure doesn’t sound awesome on paper, either. This is something worth thinking about, I believe, before judging CEM test mare life too harshly.

I can only speak from my experience, but the facility I have worked with is wonderful. It’s like any other breeding farm. The mares used for testing live out in a happy herd except for when being used, at which time they are brought up to the barn and turned out separately in a paddock. Not much different than when a mare is being used for breeding and might be pulled out of the herd so you can more closely monitor her up to ovulation.

I didn’t know those mares were spayed, I thought they were given PG post-breeding to prevent pregnancy, but maybe I was wrong. I never actually asked. But there are no foals.

Most of the facilities are farms, or annexed parts of vet hospitals that are, for all intents and purposes, their own farm. It isn’t some sterile environment behind concrete and barbed wire. Animals there live normal horsey lives.

You do seem quite disturbed by the idea live cover breeding, which I find odd, since that’s the manner in which horses naturally reproduce.

It’s OK, really. Nothing terrible is being done to these mares. They aren’t sex slaves. Cooperative , willing mares are required.

Mares who are not “into it” are not used, since they would object to live cover and when mares object, they can and will hurt the unwanted suitor. No one wants that, for any of the horses involved, mare or stallion.

Very often, spaying a mare puts her more or less permanently in heat. That’s one of the biggest risks to spaying the ridden horse. It should be a very last resort for any mare having such major heat cycle issues.

There was a thread in here not too long about this very thing - the OP ended up resorting to spaying, after exhausting literally every other option. She ended up donating the mare to a breeding program as a tease mare, because while it did fix her physical discomfort issues, she was always in pretty obvious heat, and really not rideable in that condition.

This topic is rather timely. I was just reading the Eurodressage article about the lawsuit over Totilas’ frozen semen straws.
I’m curious about this part:
*“In the sales transaction, Schockemöhle did receive 600 straws of semen, as Visser only wanted to keep some (i.e;. 244) for his own breeding at the time. Many of the 600 straws turned out to be infected with the CEM bacteria and were useless. The stallion was treated for the disease in 2011 and his semen had been clean since then.”

Would it be standard practice to test the semen for CEM after collection, or is that not usually done ?

The entire article is here: 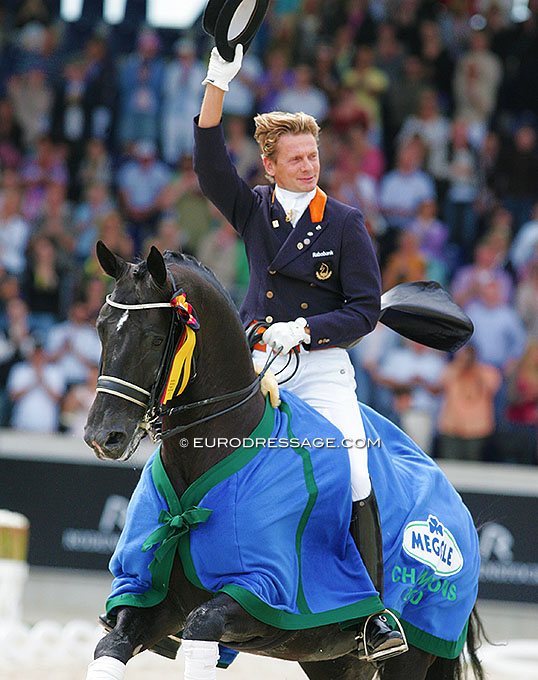 Court in Arnheim to Cast Verdict in "Schockemöhle vs Visser" Case of Totilas'...

The legendary stallion Totilas continues to live on at a high emotional level two years after his early demise. Former owner Kees Visser and Totilas' last owner, Paul Schockemöhle, are caught up in a big cross-border lawsuit about the ownership...