What left these bloody footprints in my barn?

When I walked into my barn this morning there was a series of bloody tracks all the way down the 46’ aisle. I found more later around the house but unfortunately the doorbell cam (usually very sensitive) didn’t capture anything. Based on the shape, my best guess is a bird with webbed feet, but it would have to be pretty tall because they are 28-30” apart. Any ideas on this mystery?? Poor thing, whatever it is. 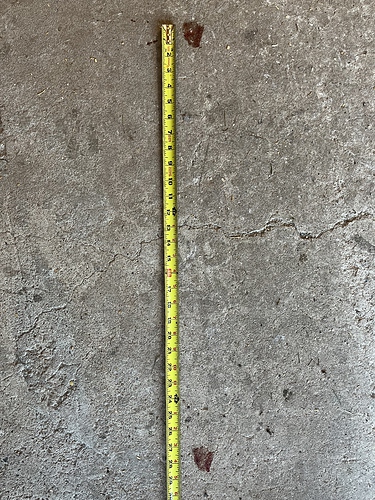 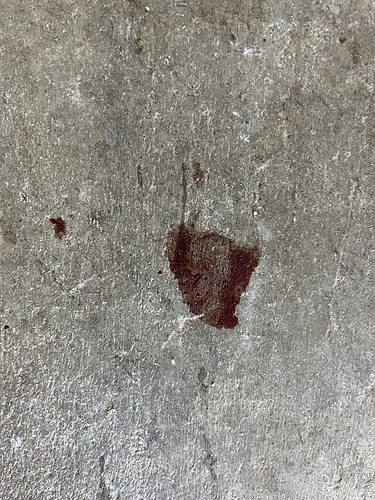 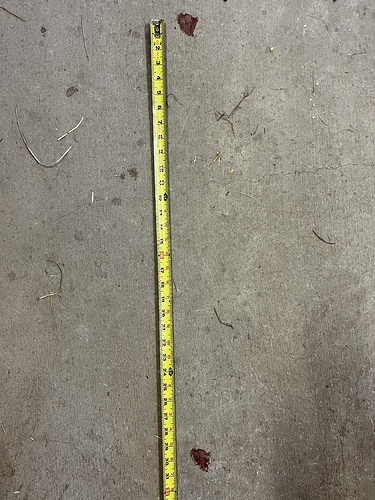 I wonder if that’s a coyote with a snack in it’s mouth, with the snack dragging the ground once in the stride. Those don’t look like foot prints.

I had the same thought, but they are SO consistent that I think that’s unlikely? Every single one in the barn is the same shape and the same distance from the last one. If something were being carried I don’t think the shape would be identical every time it happened to touch the ground. Who knows though. I really wish the doorbell cam had caught it!

I agree that it is a foot print. But it could be a cut pad on an animal. Maybe more likely than a large bird (barn cat, bobcat, coyote, raccoon, big rat…?)

The marks here aren’t identical though. Similar! But not identical. As long as the coyote didn’t adjust his grip or stride, I can totally see how a bloody, swinging ducks head or wing (or whatever) could leave that sort of mark at that sort of interval.

Definitely too bad a camera didn’t grab it!

I agree that it is a foot print. But it could be a cut pad on an animal. Maybe more likely than a large bird (barn cat, bobcat, coyote, raccoon, big rat…?)

Cut pad is interesting. I’d think after bleeding for that distance the toes would be bloody as well though? The tracks covered about 350 feet before I stopped looking.

That was my best guess too (and if this is the case, I’m thinking coyote since they tend to walk in straight lines to get from A to B. Domestic dogs and cats are less efficient so their tracks are not straight).

But I’m second guessing the ‘prey being carried and bumping on ground’ theory.

So, I think it’s coyote with a bloody paw, like a torn foot pad. The dimensions and spacing measure up correctly: 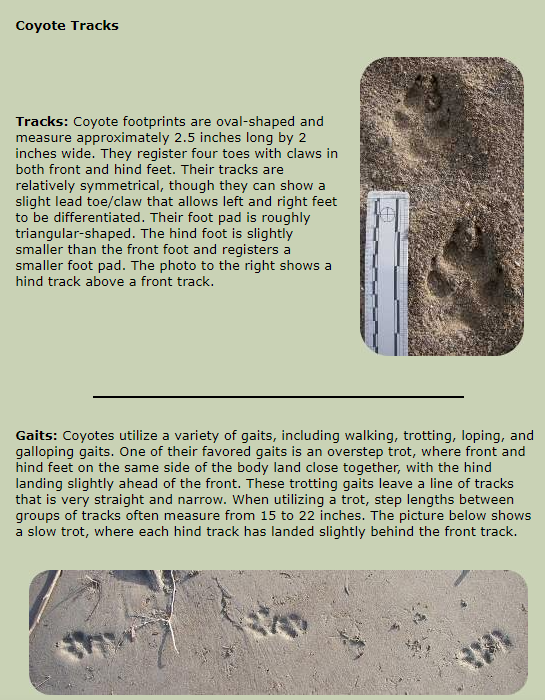 Or someone’s messing with you? Is there anyone who’d want to scare you? (but that the camera didn’t pick it up is weird).

We do have coyotes! I’ve never seen one but my husband has, and we hear them often, especially in the winter. Our tamest local predators are foxes but I think 30" would be too long, right? Our neighbors also have numerous dogs that run around loose

and one of them is very large and known to hunt smaller animals. I am skeptical that the doorbell cam would have missed something that big though. It really is pretty sensitive and has caught some weirdly small things, like moths and birds and twigs blowing in the wind.

My continued hang-up with the predator footprint idea is that after 350 feet of blood I’d expect the toes to be bloody too.

Or someone’s messing with you? Is there anyone who’d want to scare you? (but that the camera didn’t pick it up is weird).

I definitely had that thought too! Joke’s on them I guess because I’m intrigued but not scared. I’d rather go with the animal theory until disproven though.

Ironically, I’ve been researching cameras for the barn area but haven’t pulled the trigger yet because I can’t decide what system to commit to. Our doorbell cam is an Arlo and I like it but for a multi-camera system it gets pretty expensive. I do have a trail cam I will check but it’s not near any of the visible tracks.

If it’s just one foot, I can see the 30" pretty easily if they’re briskly moving along for fox or coyote.

My continued hang-up with the predator footprint idea is that after 350 feet of blood I’d expect the toes to be bloody too.

I could see it bleeding just enough to blot against the ground and not drip. Just a scrape.

I wonder if the doorbell cam picks up only above a certain height? Like it might get triggered by a moth at eye level but not 18" above ground level.

yeah, agree that it’s plausible that it’s only bleeding enough to make the print when pressed against the ground, not enough to be noticeably dripping mid-stride. But, OP is right, those are a LOT of prints-- kinda hard to believe the pattern would be so uniform, given a natural / unpredictable process like an injured foot.

…I cannot believe how much time I’ve spent today thinking about bloody tracks in a random stranger’s barn LOL It’s definitely interesting though. OP get cameras up in the barn, STAT!

…I cannot believe how much time I’ve spent today thinking about bloody tracks in a random stranger’s barn LOL It’s definitely interesting though. OP get cameras up in the barn, STAT!

Hahahaha that makes me really happy actually because I really want to figure it out and maybe you will have a good theory! I moved the trail camera to the barn area today! There was nothing relevant on it from last night but it was pretty far from the action. I’m guessing I will mostly get videos of myself, rabbits, and foxes but you never know. I asked all my neighbors and no one has seen anything unusual or injured. One did see a massive coyote yesterday though.

I wonder if the doorbell cam picks up only above a certain height? Like it might get triggered by a moth at eye level but not 18" above ground level.

I went through and found an old fox video and y’all can see it here if you’re curious:
https://youtu.be/kWkDQKE1CVw, or look at the attached still if you don’t want to click on a link. (We have many better, cuter fox videos because they run across the front porch sometimes, but this one is a good example of a smallish animal running on the driveway). I definitely don’t count on it to pick up small or low-contrast things 100% of the time at night but it does often pick up animals on the driveway, even if they are low to the ground. I’m sure there are many times it misses them though, and this was apparently one of them since the bloody tracks go right down the middle of the driveway in front of the porch. I think it might have been super foggy this morning too but maybe that was yesterday? 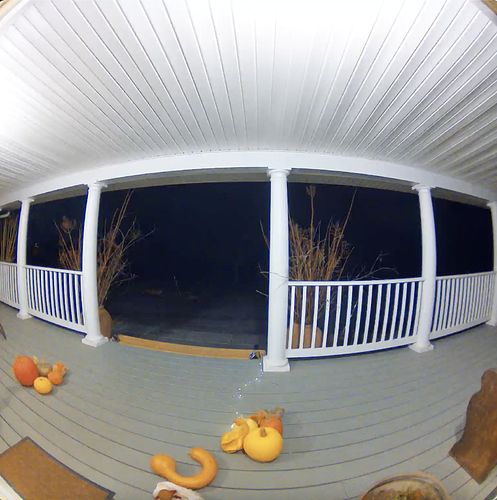 Nothing on the trail cam at the barn last night!

On a work break, I did some google searches for animal tracks and this result cracked me up. I guess they think horses are born with shoes?

It’s such a strange collection of things that mostly wouldn’t be found in the same area anyway, and also includes “dinosaur,” which is pretty generic and…unlikely to come up very often. 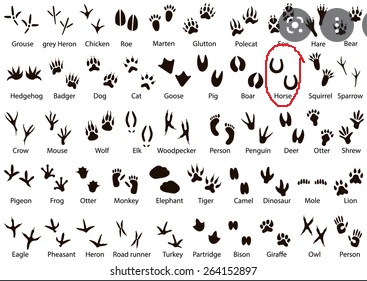 Now I want to see a foot print chart for the various types of dinosaurs so we are sure we know what actual dinosaur a foot print is when we see it. Darn it. How dare they only include one of them.

If it helps support the coyote theory, I had similar foot prints from when my GSD got a pretty ugly cut on his paw pad.

I wouldn’t think it would trickle to the toes if they are regularly walking on it. It really depends on the type of cut, whether it is a slice (ie thin and deep) or a tear (rough edges). Pressure from weight will make a slice cut bleed like that, where there are no droplets between when the foot is weighted or not – because the torn skin doesn’t contract unless weight is on it.

I guess they think horses are born with shoes?

And I guess they think “persons” walk on their hands!

@Janet Bwahahahaha I didn’t even catch that one, too funny!!

It only committed murder after it attacked the CDUS’s.