What makes you look "too big". On a horse?

Looking for a new horse to replace my show horse that is injured. Current horse is 16.2h, about 1200lb. Have tried a couple that were in the 16h range, trainer said we’re too small for me. Unfortunately I am no longer (well, never was really) a 5’2" size 0 horse show princess.

I am 5’10" 170lb. I have been concentrating on horses at or over 16h. After some reflection, I’m not sure how 2" alone will make a difference making me look to big on the horse.

Do I need to concentrate on looking at thicker horses & not worry about the height so much?

Do you show in hunters? If so, answers will be different because subjective suitability matters.

Otherwise, it’s a combination of a bunch of things that make you feel comfortable on the horse, and make the horse able to carry you comfortably - height of horse, width of barrel (“takes up leg”), length of neck, how high or low the neck ties in to the shoulder, and how stocky the horse has (or how much bone, using the old term, which was literally measuring around the cannon). 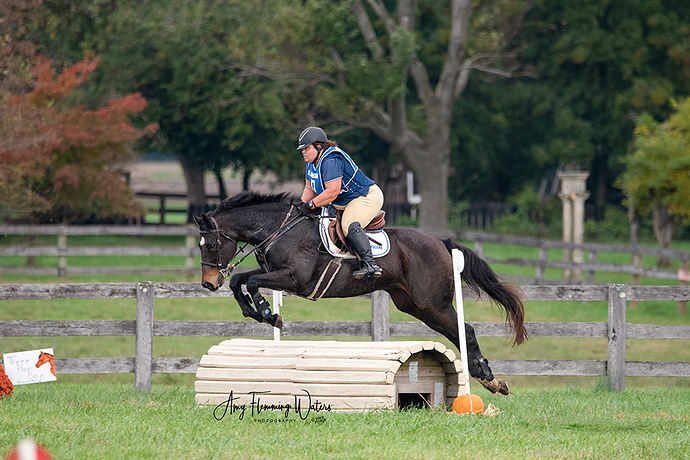 The short answer is, “the size of the horse.” And “yes” to your last question.

The part that I think a lot of people get wrong, is that “height” does not equal “size.”

In contrast, I have a 16.1h mare who wears a 76" blanket and takes the smallest girth on my farm. I definitely look bigger on her than I do on the shorter 15.3h horse.

And definitely yes to all of the other things joiedevie posted - length of neck, where it comes out of the shoulders, how stocky the horse is overall. But the height is rarely the determining factor on any of those things.

I’m another short and fat rider. To me, the build of the horse is the biggest factor. To my eye, I look too big on my 16.3 horse with a more dainty build but do not look too big on a chunky monkey bigger-boned horse that is only 15 hands.

Also femur to calf ratio dictates how your leg sits on the horse. I have an average height average leg to torso ratio but somewhat longer femur and it can push me into chair seat or make it hard to “wrap” my calf around a horse. But I can ride a smaller horse and just look like I’m on a smaller horse, not weirdly disproportionate.

Seconding this—I’m 5’9”(ish) but I’m very much all leg/short in my torso (my brother is 6’1” and we have the same inseam). I’ve ridden ponies that I looked perfectly normal on because they had substantial barrels that took up my leg, but I’ll make a narrower-built tall horse look small if my leg doesn’t have enough to wrap around.

My horse is somewhere in the 16.3/17hh vicinity and we make each other look normal-sized because his barrel is the right size for my leg and he’s as gangly in his limbs as I am. To look “right” you really have to match the right areas of your body to the right areas of the horse, and your torso/leg ratio is a huge part of what will be the best ride for you in terms of build.

What they said. I am almost exactly the same size as the OP - here I am on my 15.2 appendix mare when she was a scrawny 4 year old, and then after she filled out and went up a blanket size at age 8. For comparison, my 17H, probably 1500# warmblood. Honestly, I do feel the WB is a much better fit for me, and I am unlikely to get another horse under 16H (as well as having plenty of barrel). It is easier for me to ride the QH in a jumping saddle though, because my lower leg can be more on with the shorter stirrup. 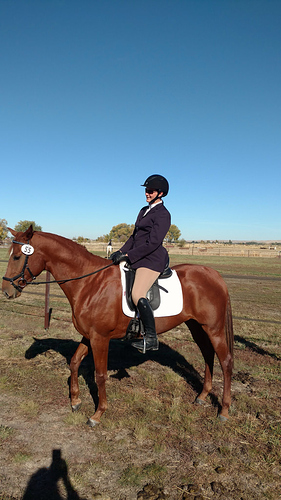 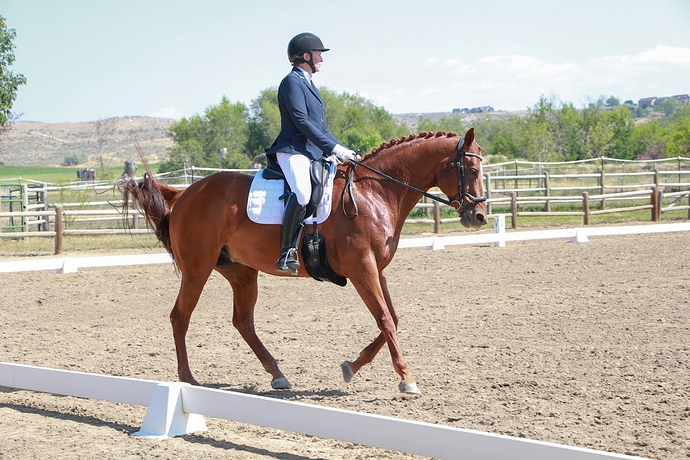 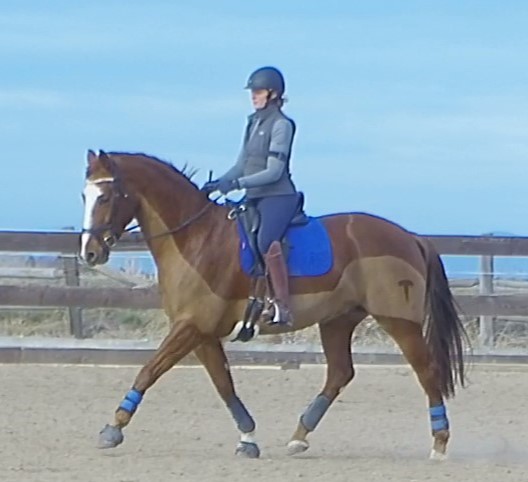 I wouldn’t worry about height at all. I’d concentrate on how my leg hangs on the barrel of the horse.

If you are constantly lifting your ankle in an attempt to reach the horse’s barrel, that’s just not going to do you any favors. If the horse has a nice big barrel (and you are short, such that your legs stick out and don’t wrap around), that’s not going to work either.

Pick a horse that feels right to your leg.

(Obviously, I do not do hunters. and I happen to like small horses. Like driving a sports car rather than a bus. Plus, small horses are generally cheaper and IMHO stay sounder.)

I’m you! For the shorter ones, cob types where I’m at, if they fit my leg I need to be careful of my torso length.

For anything taller than 15.3 it depends on if they are slab sided or not.

I don’t go by looks, but by feel. I have two AQHA who are 15 hh maybe a little under, but solid boys at 1250 each (have them weighed each year at the feed mill). I also have one 18.2 hh OTTB who clocks in at 1500. Riding, they feel the same --pleasant gaits, responsive, light in the bridle (well, not so much the OTTB but he’s a dressage horse and prefers contact --the other two never touch the bit).

As to looks, I’ve seen myself photographed on both. At 5’9" 150 on most days, I look just fine. I don’t think I look “better” on the big guy, or overwhelm the little guys. 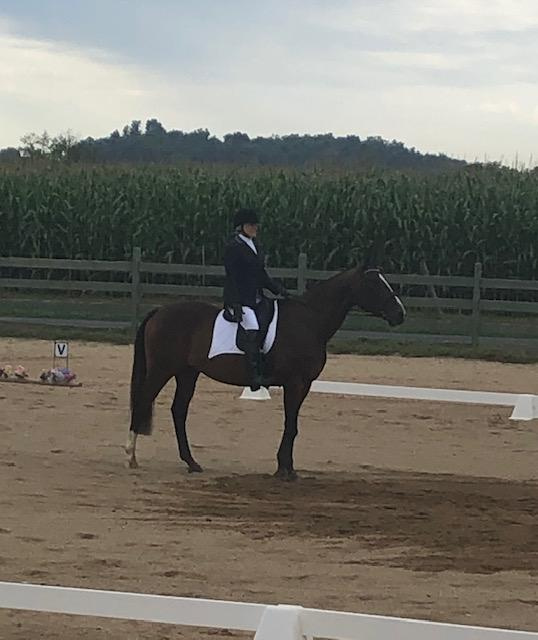 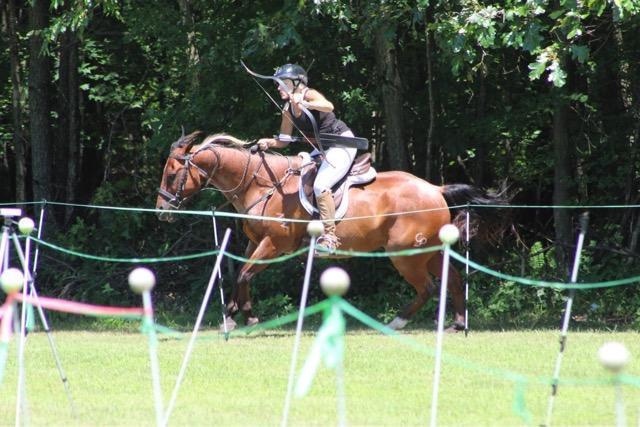 This is off topic but I love your swallowtail pad!

Voting with those who say How Horse fits you.
For reference:
My 6’, wiry DH & his skosh under 16h TWH: 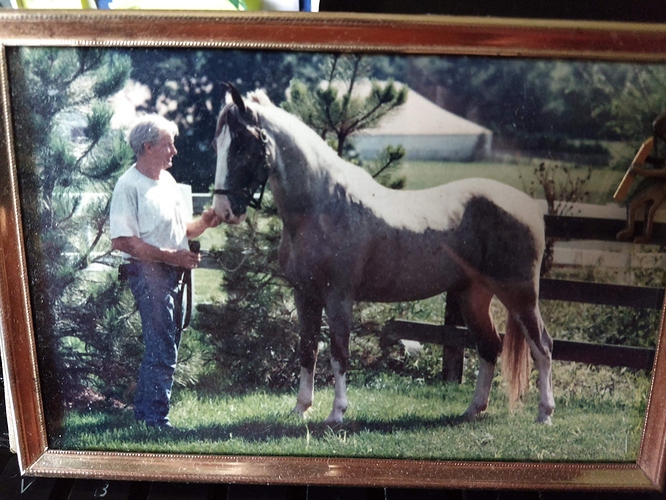 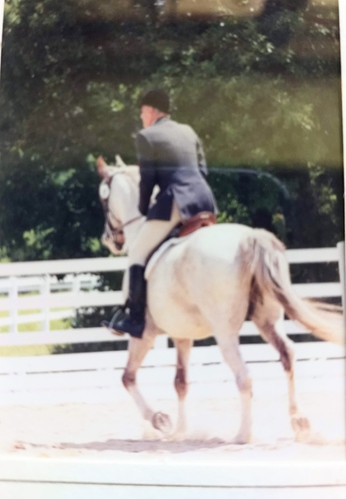 Long story made short: DD gave me this ultra well trained dressage schoolmaster who didn’t work for her in 3Day. I thought what the Hell, how hard can it be to ride Dressage? Took 4 lessons and entered a show. Panic! Need to look the part since I have no idea what I am doing! For some reason I thought I HAD to have a swallow tail pad! Could not find one ! Ultimately had one custom made by Padded Ponies. Put on my brand new white breeches, shined my fox hunting boots and proudly wore my hunt colors into the ring. Horse of course knew his job and I tried to stay out of his way. We scored a 60 and a 59.8. Won both classes. I think the judge was impressed by the swallow tail pad and over looked an old lady fumbling around on a horse who could give Totilas run for his money.

I am also in the “does this horse fit your leg” camp, but honestly love hony-sized or even large ponies the most, especially those that are a bit high-headed (e.g. Morgans, Arabs etc.). I’m a bit heavy (5’2" 160 pounds) and short-legged. I have ridden bigger horses (up to 17 hands) but it just feels very far from the ground!

I’m 5’10" with a 34" inseam. When I was riding school horses, I felt much more comfortable on the larger barreled horses. The thinner ones always felt like I could touch my toes together under their stomach.
Of course the length of neck matters too if you’re jumping. When I got into jump position if my head was close to the ears, that didn’t feel good either.

I’m 5’10, a bit heavier than you, and for me personally, a longer horse, particularly a longer neck is key. I am long in the torso, but my legs aren’t exactly short lol. I have a 17-something gelding with a nice long neck who I fit quite nicely, but I recently hopped on my friends 16.1hh TB who has a very long neck and body and my trainer commented on how well I fit on him. He is not a small horse, but much smaller than my own horse. I also have ridden another friend’s QH, and he is around 15.1hh and I joked that it has been a while since I had “been that close to the ground”, but he also had a long neck, and he took up my height quite well. It’s hard to put all the pieces together without sitting on horses, but if you can identify the size and shape of horses you fit well on, you can keep an eye for the “type”. I personally look for horses over 16.1 with a long neck and a slightly uphill build and a decent “spring” to their rib cage.

Like everyone else has said, the relationship of your upper body to the length of the horse’s topline, and your leg length, hip width, and hip flexibility to the horse’s rib cage; and the general scale of the human respective to the horse.

I’m an average sized person at 5’7” but I have long legs and a somewhat short torso for my height. I’m also built like a brick house with broad shoulders and a lot of muscle. My horse is 15.2 1/2. If you stand there and look at him for awhile, you realize that his skeleton above the legs is built to be 16.2, and the legs are built to be 14.2.

Fortunately his overall length averages out. Because he’s fairly compact nose to tail, he suits my upper body; and because he has a massive ribcage for his overall stature, he suits my leg. My sister is 5’9” and willowy. Because of his ribcage he takes up her leg, and because he is built on a bigger scale than she is, she doesn’t look inappropriate on him, either. Conversely, my mom is 5’7” but long in the torso with average length legs and less hip adduction than I have. She can’t get her leg around him comfortably and it doesn’t make as nice a picture on the flat. But all three of us looked suitable on my sister’s late TB, who was 16.3 and built fairly narrow. He was tall but slab sided, so he took up everyone’s leg while not taxing my mom’s hip flexors so her leg could fall in a correct position. But, since he was a more slender horse than I am a human, if he had not been tall, I would have looked too big on him. I rode a friend’s 16.1 TB a few weeks ago, who is also built finely. He’s not a small horse, but my proportions made him look a little small.

I’m about 5’5" and weigh almost 120 lbs (my heaviest) and my pony is a compact 13.1ish. I’ve seen photos of someone riding him with long stirrups and she looked too tall for him. My stirrups are considered a bit short for dressage and I’m told we’re a perfect match. He is quite a wide barrelled pony so there’s that. My pad is a small sized Le Mieux and the saddle is an older Passier, which is a bit minimalist. Other saddles looked like La-Z-Boy recliners on him; his tack is proportionate to him. If at first he felt too small for me, the feeling went away when I got used to him.