Experienced horse person, recently acquired a Shetland or Mini who was in bad shape but represented to be broke to drive. I do not have harness or a cart and would like to acquire these, and really start reading about driving as a first step. My goal would be able to drive my pony in my indoor riding ring, my outside sand ring, and around some gently rolling fields. I had a Shetland pony that we drove when I was very, very young, and we had a Hackney pony that we drove when I was a little older, but I consider myself a complete beginner when it comes to driving. I do have a truck and trailer, and am pretty close to Amish auctions. I know some knowledgeable horse people in the area who drive but I don’t specifically know of any schools or trainers, or how it works (does the instructor come to you? Do you take the pony and cart to the instructor?) Any ideas on how to get started? The pony is very sweet and easy to handle. How much of this can an experienced horse person learn solo and how much requires a trainer? (I train lots of green horses under saddle, and have for many years, but am not knowledgeable about driving)

I always recommend you find someone who knows what they are doing, most are pretty open to teaching people who are really willing to learn. where are you located?

Contact one of those knowledgeable Drivers & ask for help.
My local Driving club has members with many (some with 40+) years experience who help newbies learn to harness safely.
They might not be ADS Rulebook compliant (Headers will hold onto a bridle) but they are safe.

If you can longline that’s a good place to start, then progress to ground driving where you walk behind at the distance a cart would put you.
When you’re ready to hitch to a cart have a helper who can head your pony “in case”.
Have someone who drives go with you to purchase harness & vehicle. They will know to check things you might overlook.

There are no trainers near me, closest is almost 3h away. But having ridden most of my life, I’ve been able to finish my mini who was greenbroke by a young Amishman at 2-1/2.
I bought mini as a 2yo, trained to lead only.
Not giving myself Airs, this mini has the personality that made my job a lot more possible. He gets at least 60% of the credit

We do more trail/road driving than showing, but we can clean up nicely 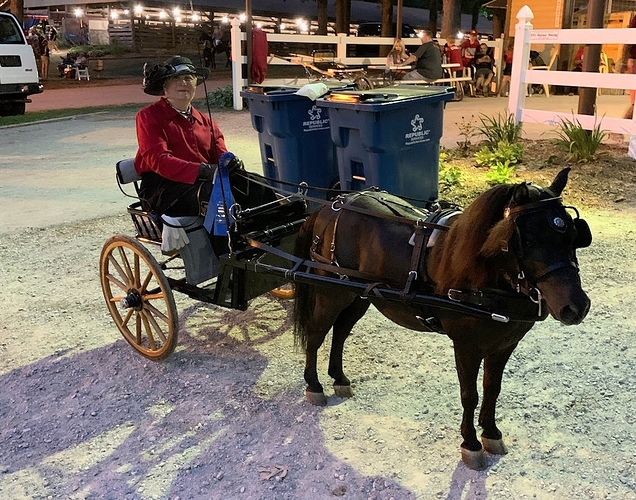 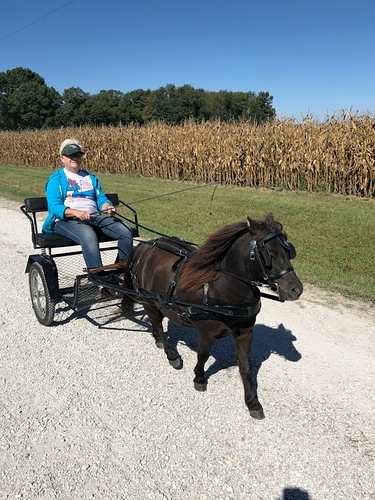 Which reminds me…
COTH likes pics

I agree with the idea of finding someone knowledgeable to help. You can find local clubs on the ADS website, and if you are really lucky you might be close to some active clubs (pro tip: close in the driving world is 2 to 3 hours for most of us). Joining their fb page and asking for help is a good first step.

My journey was sort of like yours. I drove as a kid in the 70’s when we basically hitched the pony up to the pipe cart and found out if said pony would “drive”. It did stick with me though, I was gifted a 2 year old pony in my senior year of HS and I broke him to drive (in that sense I was more lucky than good) and I drove him on and off for the next 20+ years. But really, I knew nothing, about the only thing I did know is that I didn’t know much.

Fast forward another 20 years and I decide to take up combined driving. Goodbye hunters, hello fjeral Fjord. I got lucky in that an acquaintance of a friend was selling her marathon vehicle that was used for a pony sized about the same so that was all set and the same harness dealer I used all those years ago was still in business so she did a lovely job of talking me through what I wanted and needed. Don’t be afraid to ask questions, they are happy to help and explain why x is better than y and so on. The harness maker even paid attention to the age and breed (young and Fjord) and made the harness with plenty of extra room for him to grow into it.

When I first got him as an unbroken coming 4 yr old I didn’t rule out being the one to start him, depending on how amenable he was, because I felt comfortable ground driving and introducing him to the basics (dragging noisy things, weight in the traces, shafts bumping on the sides) but the more I did with him the more I realized that I did not want to deal with what happens if it all goes sideways in the early stages. Age apparently makes us wiser if not more cautious. So I literally cold called some top drivers in the closest driving mecca to me (Aiken) and asked if they started young horses. They had all given up that part of driving, but they all recommended the same person. So I sent him off for 90 days, fully ready to let him stay longer if necessary (it wasn’t, apparently my old ground driving and desensitization skills were up to par so he was hitched up within a week). Best decision, best money spent ever.

But a couple things that also helped drive that decision to send him off: you need to drive them a lot in those first few weeks, not for a long time per drive, but hitch them up often and you need to slowly build up their strength for pulling without making them sore, and equating pulling with pain. Both of these lessons may be doubly important for the too clever ponies and the latter is probably super important for the tinies. So even if the pony has been well broke to drive, the consistent work will benefit you both (and probably only need 30 days) and worst case scenario, if the pony has some significant holes in his, it’s best if they are uncovered by a professional. This will give you an opportunity to assess whether buying all the driving equipment is the best option, depending on how things go. And all of this is really tough when it is someone coming to you, it’s just tough to get someone there 6 days a week for 30 to ? days, so send them out is just a better plan in my book!

Thank you for the information! For what I want to do initially (drive around my riding rings, and eventually some grass paths around fields), is there any reason why a mini sized EZ Cart, plus a biothane harness, would not be appropriate? Should I get fenders for such a cart? Any other options/optional features on a pony cart that I should consider?

Be aware that many of the Ez Entry type pipe carts, bicycle type wheels, are quite tippy. The wheel bounces on one side, comes down, bounces again and cart flips. The cheaper bike-type axles may come out of the fingers holding axles in place. Pipes can get bent easily, suffer metal fatigue. They are cheap, people buy them because of low price.

Get a cart that is of good quality, perhaps with motorcycle wheels for driving around the ring and fields with soft or deeper going. Fenders reduce mud spattering. But be picky about the details before purchasing. A backrest on the seat adds a lot of comfort on longer drives. A good seat cushion, leaf springs instead of coiled springs under the seat. Of course such options add to the cost a bit. Biothane harness will be a good idea for fun driving.

I dont know alot about driving minis, that said for most horse driving I prefer something with 4 wheels any day to a 2 wheel cart, it is just so much more comfortable to drive, easier to get into, and the horse has no weight on their back. there are far fewer “cheap” options for this type of vehicle, ie you will be spending thousands rather than hundreds but both you and the horse will be much happier, assuming the size of the horse, your weight combined with the vehicle, and the terrain you are facing permit it.

With minis, especially the little minis, weight is a huge factor in vehicle choices. A mini pulling a 4-wheeler may be overloaded even in a groomed, flat arena with firm dirt. Footing with any depth adds drag to each of the wheels. Narrow wooden wheels cut into dirt, pull is harder. Air tires still have drag but do not cut into the dirt. Two wheels pull easier than four wheels, but mini has the shaft and driver weight on his back. Four wheel vehicles usually have more material in them, heavier, plus driver, with more wheel drag, though no physical weight on his saddle.

So it becomes a “tradeoff”. You decide how you want to use the mini, decide the best vehicle for that use. My friend went from a 2-wheel (skinny treads) Meadowbrook cart she bought and assembled herself to 4 wheels. Her main 36" mini was an ex-stallion with “attitude” and very forward. He would try his darndest to get thru deep going, up hills. She helped by pushing wheel treads on the 2-wheeler, like wheelchair folks do to get them thru. But sometimes that was not enough. I had to help him pull the cart out of the 4H arena deep sand, he could not move it with 100# kid in there! He was getting mad! After a couple years she changed from a single to a Pair, pulling a (I think) Glinkowski 4 wheeler. The two 36" minis did pretty well with that, but she made any passengers get out to go up hills! I believe back then she had hard rubber on steel wheels.

Everyone wants light weight vehicles for minis, but sometimes you lose too much strength that way. I think folks often overload minis, whose seemingly accepting nature puts up with it or just quits. With full size horses we were taught that you did not ask them to pull more than 80% of body weight. You may need that “extra” for a big hill or some deep going with mud. That is not the case at mini shows, they are often maxed out or lighter weight than the load they pull, even though it is flat arena ground.

Making a list of pro and con about your vehicle choices might help see things clearer. We tend to stay with 4-wheelers because of the better ride. No shafts doing up and down during a drive. Bouncing shfts and seat of 2-wheelers makes husband’s arthritis get angry! And despite the “myth of floating shafts” they are momentary things, seconds, especially on big movers with air time suspension. You are NOT a poor driver or have poor equipment choices if your shafts don’t float all the time during a drive!

Always best to find a professional • to send your mini to in order to prep both of you • and guide you through equipment/ cart purchasing & fit the equipment. The professional should have some minis, who know their jobs and you can take some safe driving lessons, while your mini is being trained. After you both are readied / then the fun begins SAFELY.

Winter is a great time to practice in a nice indoor arena, so you’re ready for the summer !