Where to find used harness

Aside from ISO ads all over Facebook… where can you find used harnesses for sale? Are there any tack stores (online or local that you know about) that sell used harnesses?

I’m really nervous about buying used harness online. If you can get returns, great! I don’t do it for saddles since shipping is so expensive these days.

I found my pony harness through my region’s email newsletter which lists things for sale as the bottom of each. So you can reach out to someone involved in a club near you.

Depends on your location & how popular Driving is in the area.
I have multiple choices of harness & Driving horse auctions that occur regularly during the year.
I’d hesitate buying sight unseen from a private party online.
Some of the major suppliers do offer used harness. Those I would trust online.

I see them on the fb ads periodically, but the ones with good pics and known brand go fast so your need to watch those groups multiple times a day and not sit on your hands when you find one! In other words of your need one soon, new may be your only option…

Come on @2DogsFarm…. You know where I am… lol. I’m looking for pairs harness for Rusty’s cream colored “sisters”.

Yea, that’s where I am. I’m a bit nervous about buying used online from a random individual, but until I know how the “sisters” will work as a pair, I don’t want to spend $2k on a set.

Oops!
Did not realize it was my Ntl Drive Nanny posting.

Bugs says: " Hi to Rusty!
Tell Nelina I’d like to meet her sister too! Rowwwrrr!"

What can I say?
He likes big butts & he cannot lie.

The Harness Room, Windsor, South Carolina. 3,136 likes · 6 talking about this. The Harness Room is a virtual consignment store for carriage driving equipment, clothing, appointments, harness and...

is a great place to start. Let her know what you are looking for she has TONS of contacts. The Harness Room is run by Tracey Higgins. She is totally trust worthy and

I’ve gotten lucky with used harnesses off of ebay over the years. I also recently sold one of mine on the CDL email list, you can register for an account at https://listserv.dartmouth.edu/ at least I think you still can, it’s been around a long while and is mostly quiet these days.

Facebook is likely the best place to look now. Rather than searching in your area, search areas that have a high population of driving individuals.

Depending on your needs, you could always consider a new synthetic harness from a good brand, like ComfyFit. https://chimacumtack.com/product-category/harnesses/ I was extremely happy with my ComfyFit.

Yep! I’m on the CD-L list and had posted to their Facebook group as well. But after measuring my girls…. Well… they aren’t quite a matched set (one is a pure bred fjord, the younger one is either super late developing or a cross bred fjord as she’s a rescue)… their strides will match, but size wise they are a little different and the smaller one is a touch too small for a cob sized saddle and girth. So, Yonies is making them a custom set which was some funny conversations…. Wait, so the small one is pony girth, Cob rear and front end and horse turn back?!? Yep, that sounds about right.

All that to say, it became too apparent that a matched set of harness was not going to work without replacing some pieces which really made it worth the expense of just getting new.

Have fun with your pair!

I am sure they will look great regardless of the slight size difference, because at the end of the day, it should be about having a good time and enjoying your animals.

Thanks! We will mostly be just driving for fun, I’m not terribly competitive with driving, I just really enjoy it and am so excited to get the pair going.

finding used harness is tricky but not impossible. Many parts are somewhat adjustable in size but some are not so good to have measurements there on what you need. Breast collar, breeching and saddle are really your critical parts. Yonnies has a great measuring chart. Once you have measurements then it’s leg(finger) work. Best places are facebook marketplace. We have a regional group (maryland and neighbouring states only) MLMDC Buy, Sell, Trade group that I set up to help people be able to find used driving resources somewhat locally. When looking at used harness pay particular attention to where metal comes in contact with harness material (think rock, paper scissors!). Check holes for tearing and generally for cracks and condition of material. steel tongues on heavy trace buckles are a very good idea. Brand names are easier to resell but there are many good no names out there. Martin’s Auction can be a good hunting ground and coming up soon Friday, April 22nd, 2022. Sometimes you can get lucky through local clubs

just a suggestion but inquire at horse rescues… since many are 501.c3 charitable organizations they get donations of horse tack. My daughter found a new set of unused show quality harness that she knew the retail value was in the $2500 range, the rescue wanted $400 for it… daughter offered them $600 which they accepted then added two sets of schooling harness that were only gently used.

they then asked her if she needed any blankets showing her a large room full of blankets sorted by size, she said they had over two hundred

This is just my opinion, but very seldom do I find buying used harness to make alot of sense. Just last weekend I had a gentleman come up after hearing that I had draft horses offer to sell me 3 like new bio draft horses with no spots and black hames(typically this means chrome heal chains), he offered to me for 1000 per horse, which I politely declined because I had just purchased a team set with stainless hames for 400 a horse with “custom” stainless diamonds. Just make sure you explore all of your new options before you go used…

I haven’t purchased any used product online but many of my friends purchase used items from eBay. I think you should try to find it there.

After measuring the girls, I found they were weird sizes… literally both were three different sizes (large pony, cob, horse, extra large)… so yea. Anyway, I ended up ordering a new custom pairs harness from Yonies, it’s absolutely beautiful and they fit the girls great. I highly recommend and with the used prices on quality harness, it wasn’t much more (if more at all since I would have had to swap out pieces to make a fit) than used ones. 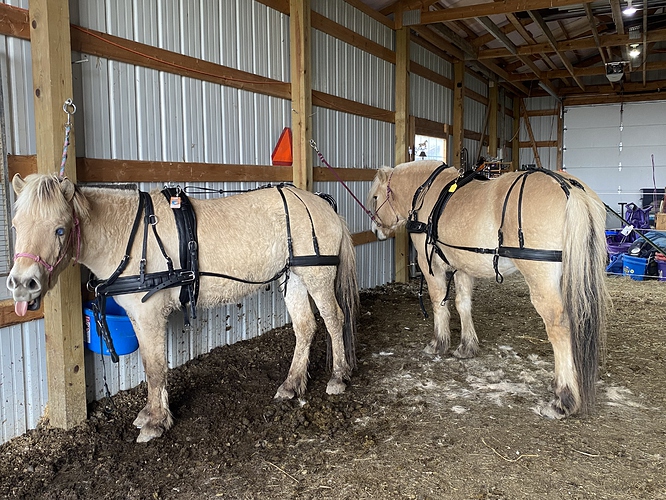