Would you buy a horse with melanomas?

Looking at a young (7) grey arab mare, She was perfect today but has multiple melanoma nodules including a tangerine sized one on her rectum. At least I am assuming these are melanomas. We are going to talk to our vet and I know this is a risk with greys, but she seems so young to already have these. Especially such a large one already. What would you do? Experiences? 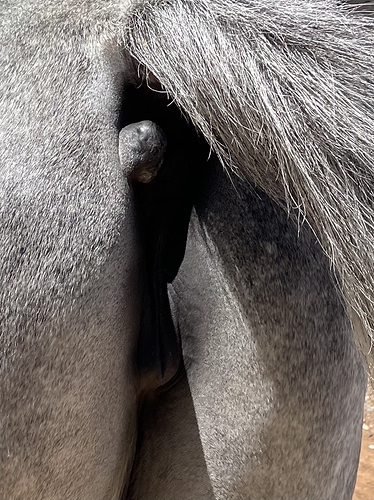 No, I would not. I will not even look at a grey horse.

Grey horse and melanomas is an unknown, you take your chances, some times they are inactive, most times they grow and others start.

We had a four year old gelding that had them under his tail and he didn’t make it to five, they grew like mad.

Most horses don’t get them until in their teens.

I think that is a question for your vet, they are the ones with the knowledge and information over many horses more than any of us will ever see.

There is a vaccine that seems to slow down growths in some horses, Oncept.
It cost about $600+ a shot and you need several up front, then a couple a year.

Don’t. That melanoma looks to be large and aggressive on such a young horse.

My grey mare had melanomas under her tail but they were very small and numerous and weren’t blocking her rectum.

She was 26 when I had her euthanized as they had metastasized and were growing in her mane and her mouth.

Greys can live a long time with melanomas but I don’t foresee this mare having a good outcome.

Agree. Pass. That’s not a small melanoma in an innocuous place.

I bought a young grey horse, figuring she would develop melanomas eventually (as they do) and she would die of something else (as they do.)

She developed melanomas quickly, and they’re aggressive. We’ve treated with oncept, at fairly significant expense, with little result. I really need to have some tumors debulked surgically, but the last surgeon I had out never got back to me.

Hard pass on that one. I have a gray, reluctantly. But from a breed that seems to have limited melanomas (Shire) even so I suspect that I will be dealing with them at some point. Since I suspect the limitation is actually more the rarity of the color and the shorter lifespan in comparison to other breeds. I emphasized in his PPE when I bought him at age 9 that melanomas would be an automatic fail, any size. A previous horse had them, it was no fun at all. A young Arab that already has large melanomas? No.

I’m lucky that none of my 3 greys ever developed melanomas (TB, PRE and Luso is now 21 yrs). I guess I’m not leary of buying another grey, but I would be if the one I was interested in was as young as this Arab with a tumor that big. Hard pass.

I would pass as well. That’s a big melanoma for that age. The size and location also seem like a sanitary concern, if not now then when it gets bigger.

I would pass. I have two grey horses and consider myself pretty unconcerned by small melanomas, but the size and location of that one on such a young horse worries me. It’s too bad- if this is the mare from your other posts she seems like a lovely horse.

Looking at a young (7) grey arab mare, She was perfect today but has multiple melanoma nodules including a tangerine sized one on her rectum.

I know it’s hard to walk away from a horse that seems to otherwise be what you’re looking for, but nope, I would not buy a horse with melanomas. I had to have my mom’s sweet gray gelding put down due to melanomas in that same area. He got to where they blocked the passage of manure.

When the melanomas are active they crack, bleed and ooze nasty gunk. It’s very sad but not a problem you need to take on.

@Paint_Party Was surgical removal ever an option, or is the location in the perianal area a complicated one to excise?

Thank you everyone for your responses so far!! This really sucks.

It does suck, mightily.

I once passed on a nifty anglo Arab for this.

I agree…No. Not on a horse this young and a tumor that big.

I bought my current gray horse as a coming 2 y.o. . I was present at the PPE. She had a melanoma on her tail dock and we all missed it. You had to crank her tail clear over her back to see it and we didn’t do that at the PPE. If anyone had found it during the PPE, I would have passed.
I had it removed. Fast forward to now…she is 19 and she has a bunch on her dock. They started appearing around when she was 15. Nothing blocking bodily functions but probably within the next couple years will have to have some of them removed/debulked.

I probably won’t get another horse after she is gone (I am 65 and she is 19) but I would not buy another gray.

A no from me too

No, I would not. I will not even look at a grey horse.

Same. After seeing the heartache involved with friends who have lost their beloved greys, I decided to never set myself up for the trauma. Remember they can spread to internal organs, spinal cord, interfere with the mouth, vision, elimination, etc.

The color is absolutely gorgeous, but the built-in risk sucks.

Nope. Our vet told us that for all the ones you see, there are usually more inside. Our gelding had to be put down but he only had one under his tail and one on his lip. The lip one never changed but the tail one grew quite a bit. He stopped eating and became depressed before it actually physically interfered with elimination. He was suffering from the ones we couldn’t see.

I would like to thank everyone for your replies and insight, and I concur completely with you all. This forum is THE place I go to for a community opinion and wisdom on horse stuff because you all are amazing.

We have been talking long and hard with people we know about this mare, and the logical choice is to run away. After all, we JUST retired our 13 year-old for DSLD. Why knowingly take on more problems?

However. This morning the owner said she would give us the mare for free to help offset the immediate medical costs. She is moving in a month, can’t take this horse with her, and is trying to get her into the best situation possible.

She will be hauled straight to the equine hospital for evaluation and we will go from there.

So we definitely have the word SUCKERS floating over our heads with a giant glowing red arrow, I don’t know. 11 or 12 years ago I walked a skinny and terrified gelding away from the paddock he had been living in and he has never recovered enough, mentally or physically, from his ordeal to be a riding horse. He is 26 now and a giant joker, will probably outlive us all.

The DSLD gelding was an 8 year-old barely halter broke stallion hobbling around on three legs (abscess from Hades) in a rocky round pen. Paid $100 for him, gelded him next day, he has been an amazing horse up until his recent diagnosis. And still is an amazing horse and a beautiful pasture ornament.

We bailed an emaciated, feral gray Arabian mare last Thanksgiving from an auction in Texas only to have to put her down a month later due to severe respiratory issues…we never met her. But she had a month of care and all of the food she could eat. Her thread was on here at some point, but disappeared with the forum change. 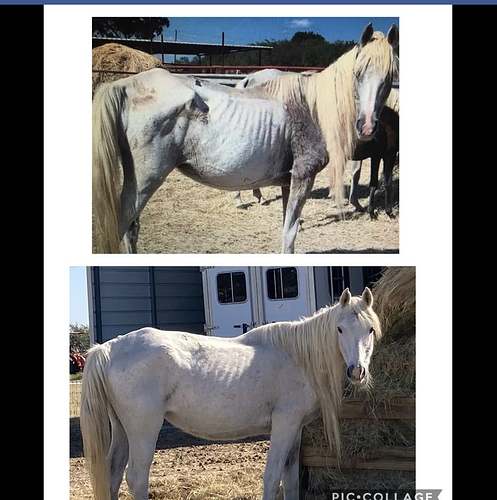 A few months later I bailed a young mule from the same auction. She was listed as sane and 14.1, turns out she was barely 13 hh and an incredibly talented bucking bronc…but she lives happily with a friend and chases coyotes away from his goats and sheep (btw I have vowed off long distance auctions forever). I don’t regret her at all and am thankful she ended up with the most patient and tolerant home where she doesn’t have to “be” anything but a companion. 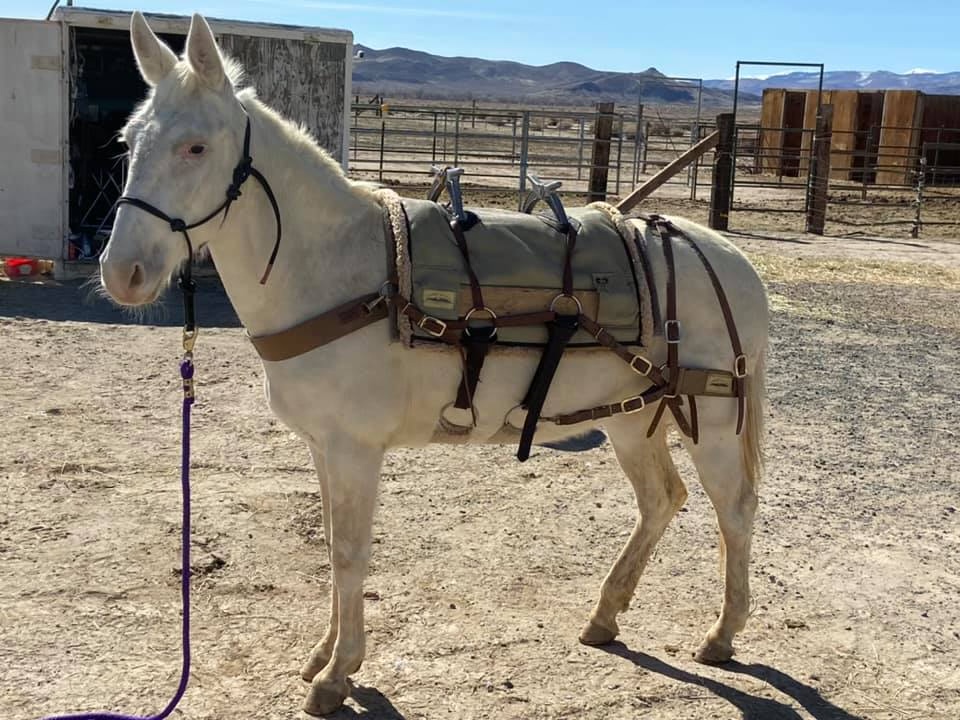 Doesnt seem to be pain related so who knows what’s up. She will stand all day long to be scratched though!)

When we went to see this Arabian mare yesterday, she said “hello” with a soft blow into my face and then held her head quietly to my chest so I could stroke her ears. I’ve never had a new-to-me horse greet me this way.

I get that with hay prices currently and all of the other costs why this would be a huge No. And melanomas scare me…but dang. I can’t walk away from this one. We have the financial ability, so we are just gonna see what we can do to help her, even if that means euthanasia in the future.

I will keep everyone apprised of her story. 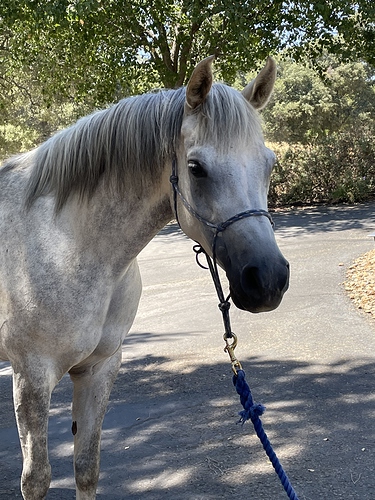