I have been trying to remember if I ever met Zippy Chippy when I was doing retirement placement at Finger Lakes, but if I did, it just won’t come to my mind. I know I heard of him there, and I certainly knew his trainer, Felix. Felix was just as much of a character as his horse and when he passed in 2015, the track was a much less colorful place.

Such a great story about both horse & trainer.
Even non-horsey folks Got It.
The director at the pantry I volunteered always asked about my TB by saying “How’s Zippy Chippy?” 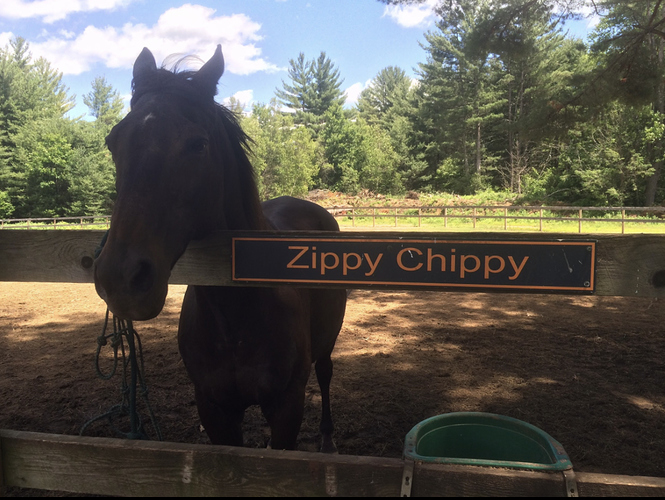 I had a “wonderful” visit with Zippy Chippy back in 2016. He was every bit the curmudgeon as billed. All my pictures look like this because he refused to move out of the shadow… that is until I tried to pose for a photo with him, at which time he ordered Red to join him in the shed out of sight of the camera. He did accept my carrots before exiting.

It was right about the time his book came out and they had copies available in the gift shop “autographed” by Zippy himself. JoAnn said I better buy one because there weren’t that many and absolutely no one would be attempting the feat again after he ran them out of the field.

He was quite the character. I’m glad I had the chance to meet him!

Aww. That’s sad news. But he lived a long life. It’s pretty remarkable how famous he was for his record. Bless him.