So my oldie developed an abscess in the sole of his left front, up near the point of his toe. Farrier had to cut it out as I wasn’t willing to let horse endure any more pain. Horse was lame with bute and boots. After draining it horse was in less discomfort, but still not right. Then he blew an abscess out the inside heel of his right front. Now horse feels fine. So fine, I wonder how long these abscesses have been brewing.

Farrier seems to think soaking / cleaning with ACV and boots is sufficient post drainage protocol. I’m not convinced. My boots allow enough room for a thin wrap. So I’ve been wrapping them. So soak / clean, non stick pad, vet wrap, then boots. I feel like I should be putting some sort of packing or medicine on the gauze / into the drain holes? But what? ACV? Iodine? Something else? Help a girl out. I haven’t dealt with an abscess in like a decade., and we would have used Epsom salts back then

Sure, epsom salts are always just as good as they have ever been. You can still used them if you wish. The situation does not “require” treatment after the pus is released, it will heal OK with benign neglect. But if you can’t stand to do that, epsom salts are the answer.

Oh! I thought I needed to keep the holes clean to prevent secondary infection!

I never keep soaking once the abscess is burst. At that point you want the sole to start hardening, not keep it soft.

I DO keep the hole medicated and padded/hoof booted, as it’s an open wound into the sole. Maybe it’s a packing of sugardine for a while, maybe it’s a cotton ball soaked in weak tea-looking diluted betadine. Then I layer gauze pads over that, to keep as flat a surface as possible to avoid a pressure point on a likely sensitive area, and either wrap the foot (gorilla tape is awesome), or just tape the padding on and put a boot on

So in your case, I’d stop soaking, put a medicated something in/on the hole, tape that on (gorilla tape), then use the boot

I had to Google sugardine. That’s an interesting concoction. I’m curious to try it!

The heel is probably fine. But I agree with JB on the hole in the sole.

The heel one is right under the heel strap of his boot so I’ll probably keep lightly wrapping so the heel strap isn’t irritating it / grinding dirt into it.

My lovely never-been-lame-in-22 years gelding came in hopping on three legs. Like you, there was an abscess on the outside of the hoof. And then the nightmare began.

January --opened and drained. February opened at top of hoof. March, grew out. April, opened at top of hoof a second time. May, opened at bottom of hoof. June, another explosion out the top. July vet and shoer meet and discuss resecting hoof as both believe “there is something in there.” (Xray showed nothing but a golf-ball size abscess pocket. Decision is made to do nothing as the entire side of the hoof is already compromised and despite the holes leaking pus --he is a healthy horse who will recover (meanwhile, I’m considering buying Heroine or Fentanyl on the black market because he’s clearly in pain), Tell vet my plan and he says horse will die of constipation or respiration complications if I give him that and I will of course be in jail.

We are now 6 months of three legged hopping around in pain. At this point, I’ll try anything . Shoer suggests Ichthammol --an old remedy I can buy at the drugstore. I hose the holes, dry, goo it in, pack with cotton (holes are quarter size) then vet wrap, followed by duct tape. Ichthammol is a drawing agent .

Six weeks later, after a month of Ichthammol and wrapping hoof – horse is pain free in his hoof. We have cured the abscess! It took another few months to grow out the crud completely on the bottom (it was not canker), Hoof is now normal.

It took another year for horse to trot perfectly sound. Six months of lameness made him weak on that leg. But yesterday I rode him as always. He’s sound.

During the whole process, I kept telling myself --he’s a healthy horse, he will recover . . 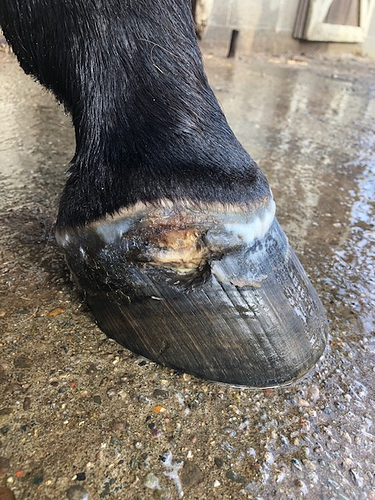 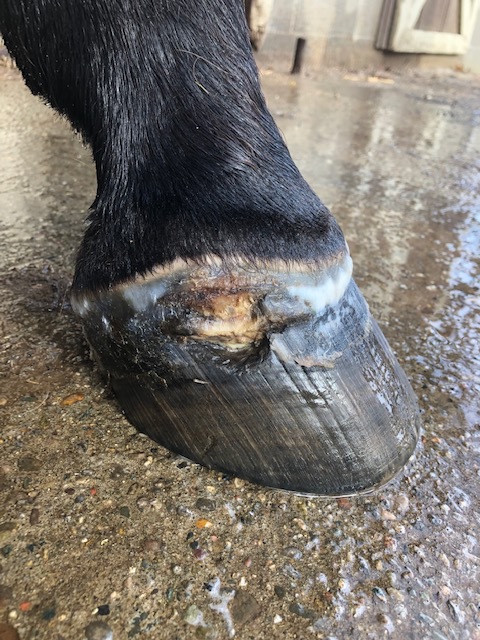 Dear lord. What an epic abscess! So glad he is better now.

Black market pain drugs for the horse made me giggle though

could that be a keratoma? i don’t know that much about them other than they present as repeat abscesses and usually require MRI to see.

i would say one good application of clean trax and on your way, keeping the open wound clean as you are. Clean trax make me feel better because the gas gets up in the hole, but who knows if it’s necessary.

one good application of clean trax

CT or White Lightning is never a bad idea to really get bacteria-killing chemicals deep in there once.

Bacteria killing appeals to me. Amazon has the white lightning gel (no mixing required); I’ve added it to my cart but it wouldn’t get here until next week. I’m gonna run up and check the feed store first.

I have pen g (go dry mastitis treatment) and tomorrow (another mastitis med) on hand. I wonder if those might be suited for an abscess hole? If I can’t get the clean trax or white lightning local I’m tempted to try it.

I already got my sugar and 10% iodine so I can make the sugardine.

My farrier acted like I shouldn’t be surprised horse is blowing abscesses. I guess that means I should be prepared in case he gets more.

I love Ichthammol!!! it is always my go to for bug bites that are swelling as well as abscesses after they burst! it is messy but I have found that it works wonders.

I have used both Today and Tomorrow in abscess holes and they tend to work as they are antibiotics and the flexible tip can get pretty deep into those holes. 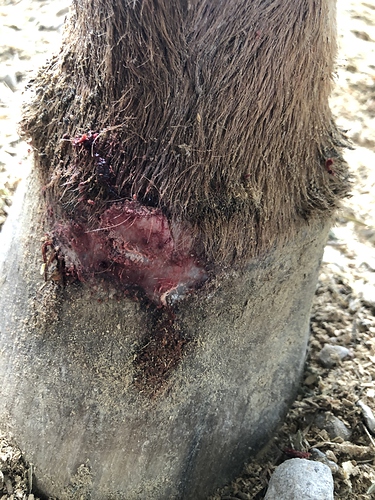 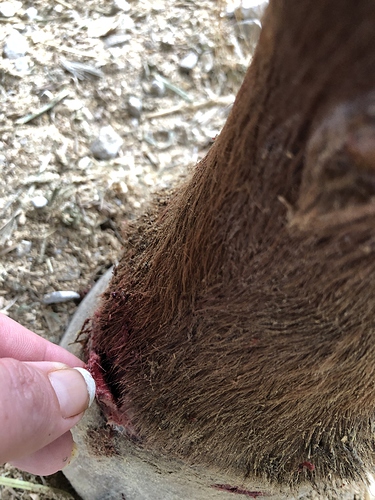 Please excuse his crusty, crunchy, dirty looking hair. I put Corona cream on him last night trying to get the remaining scabs from his skin crud to soften up.

To me, that flap looks like another abscess, not related to scratches. So 3 feet now? Wow.

I already got my sugar and 10% iodine so I can make the sugardine.

I’d just do this then

Is this horse PPID?