Asmussen to Court Over Employee Wages

Was this the end result of the Peta film debacle?

“The Department of Labor alleges in the civil filing that grooms and hot walkers who worked more than 40 hours a week did not receive pay equal to 1 1/2 times their typical hourly wages. The filing also said that records didn’t include hours actually worked, pay received—including amounts attributed to overtime, and the true regular rate of pay.”

Most grooms and hotwalkers are salaried and classified by their employers at Exempt. This means that no matter how many or few hours a week you work, you get the same pay. I don’t know anything about Asmussen’s employment practices so can’t comment on whether or not he follows the rules wrt labor laws.

When I worked for a big outfit, the grooms each rubbed 3 horses and had one day off a week. They came back and fed the evening ration for an hour 3x a week. If they had to travel with a horse because the horse did not race at the track where they were stabled, they got the next day off in addition to their regular day off. Hotwalkers and exercise riders worked mornings only, about 4 hours. Any hotwalker that came back in the afternoon to walk a horse that raced got paid for that task on a per diem basis. The really big outfits had someone do daywatch, in between everyone finishing up the morning chores and the evening crew returning to feed, so from about 11 or noon to 3 or 4 PM. I think this is typical for most larger outfits.

Flash44: Great post. What a joke that KY Depth of Labor is investigating a prominent successful horse trainer. Trainers at CD must be shaking in there boots. :lol: Can you imagine how few bureaucrats in that department know anything about horses? In VA, there is a difference between agricultural wage regs and other business wages. Probably the same in KY. Overtime and other benefits are regulated differently in VA for agriculture which includes equines.

PETA couldn’t get Steve criminally so now they are trying to get him on civil issues.
.

I actually expected him to get in hot water for falsifying his employee’s paperwork. I forget what exactly was on the video but there was something about buying green cards or social security numbers that was pretty damning

Flash 44, just because a person receives the same amount of money per week does not make them overtime exempt. They must also perform the majority of their work in administrative, managerial or professional functions. The term “professional” means lawyers, doctors, engineers, and others with advanced education.

US DOL regulations are essentially the same for all workers except those whose regular compensation includes tips, and it is the US DOL that normally enforces the Fair Labor Standards Act. It is the US DOL that is bringing this suit. States do not have the power to modify the federal regulations unless their regulations provide more than the minimum federal standards.

There is a formula for determining the hourly rate of people who are paid a salary and then requiring time and a half of that for all hours over forty.

V: There is a difference as applied to agricultural labor. Do not assume that all federal or state labor laws apply equally to all wage earners. Our farm experience is that it is not. Stablehands, barn help, etc are agriculture labor. Generally speaking equine operations, beyond farms, are still agricultural. I’d be very interested to see information to contrary. Do you have a link to federal labor laws that defines general business and agriculture labor as equally regulated? Any state that applies them equally?

As an aside on this, the attractiveness of hiring legal migrants for agriculture is simply that wage and hour laws are not as strict as applied in other business or industries.

[QUOTE=Laurierace;8214624]
I actually expected him to get in hot water for falsifying his employee’s paperwork. I forget what exactly was on the video but there was something about buying green cards or social security numbers that was pretty damning[/QUOTE]
This is exactly what I thought, and I brought it up on the other Assmussen thread.

Ag employees are federally exempt from overtime for ag activities. I was wrong.

Here is the Code of Federal Regulations DOL interpretation of the livestock exemption as it applies to racing.

Employees engaged in the breeding, raising, and training of horses on farms for racing purposes are considered agricultural employees. Included are such employees as grooms, attendants, exercise boys, and watchmen employed at the breeding or training farm. On the other hand, employees engaged in the racing, training, and care of horses and other activities performed off the farm in connection with commercial racing are not employed in agriculture. For this purpose, a training track at a racetrack is not a farm. Where a farmer is engaged in both the raising and commercial racing of race horses, the activities performed off the farm by his employees as an incident to racing, such as the training and care of the horses, are not practices performed by the farmer in his capacity as a farmer or breeder as an incident to his raising operations. Employees engaged in the feeding, care, and training of horses which have been used in commercial racing and returned to a breeding or training farm for such care pending entry in subsequent races are employed in agriculture.

Did a little more research. Bored with no cook-outs and weather terrible here. Wet and wetter in the Mid-Atlantic.

*Appears to be state specific and how each defines farmworker or agricultural labor. I knew from experience that VA had broader exemptions related to “rest breaks” and overtime. The question of salaried, hourly, and piece work appears to more a “minimum wage” issue federally. Our state has a very broad definition of “farmworker” which includes most horse operations.

Here is a very good link that answers a great many questions on this subject.

Toadie: If Asmussen failed to pay overtime to his stable employees and the state required it, he is quilty of failure to maintain correct wage and hour records IMO. The question is whether the employees involved were legally due overtime pay. In VA, they would not be due overtime wage.

You’ve got to think that other trainers at CD and other tracks are operating the same. If they go after one, the enforcement net could reach other trainers in KY. :eek: Or any trainer from out of state who operates in KY for a seasonal meet. Summer seasonal employees at Mid-Atlantic beaches are temporary residents who are covered under the state wage and hour laws of the “temporary” out of state employment by college students etc.

Wage and Hour has already gone after and gotten a wage settlement from Larry Peek Racing Stables. If you read the language that I quoted, race trackers are not considered ag employees.

V: Your last post referenced federal law. Your point is well taken. As you are located in MS it is a little tough to make the connection to KY. With all do respect, anyone who has administered a payroll in the horse business knows “ag labor” is state defined and regulated. SA is a LA based trainer last I heard. The family operation is in OK I think. Wonder where the employees pick up their check? That could be game changer. Bet it ends up in SA’S favor in court even on appeal.

Generally speaking Flash44’s explanation is closer in practice to national horseracing. Not as simple as you post. Why isn’t the federal government prosecuting SA?

[QUOTE=Laurierace;8214624]
I actually expected him to get in hot water for falsifying his employee’s paperwork. I forget what exactly was on the video but there was something about buying green cards or social security numbers that was pretty damning[/QUOTE]

I watched the same video everyone else did, but I never once interpreted it that way. I understood that he was saying workers know where to go to get cards/numbers, which is absolutely the case. And it isn’t from Americans. Once they’ve (employers) been presented with the paperwork, all they have to do is look to see if it looks legit, and sign off as such. But given that there isn’t training on what this stuff should look like, it’s all ridiculous. How the hell would I know if it’s legit? I’ve seen fake stuff that looked more authentic than the real deal.

No way did he have to bother with obtaining documentation. Other people have cornered that market.

My salary/exempt explanation was simplistic because it actually too complicated for me to get into here, and I don’t know the details of the laws, which as others point out, vary from state to state.

The suit was brought in Federal District Court, which means the feds are bringing it–unless the employees are. The Wage and Hour Division of the Department of Labor enforces federal law under federally defined standards.

It is very complicated. It will be interesting to see how it plays itself out. Sad for horse racing.

The Tour de France began today. The first 30 minutes on air was dedicated to doping. Corruption is rampant in world soccer. SA is slim pickings when it comes to the corruption in the IRS and veterans administration to name a few. Maybe the government should investigate itself. Now that would be a challenge.

Even the failings of AMERICAN PHARAOH ’ s owner took center stage to the horse’s accomplishments.

I don’t even watch the news anymore. 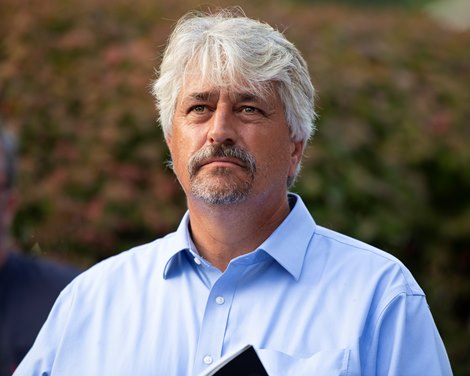 A letter filed Sept. 8 in court indicates a consent judgment has been reached between the U.S. Department of Labor and trainer Steve Asmussen in which the trainer is to pay $563,800 in back wages and liquidated damages toward 170 affected employees.

I hope someone is making him pay interest!