Welll, two of my three 50" floor drum fans bit the dust. In service only 2 1/3 summers. First one i took to the friendly-neighborhood-small-engine-fix-it-guy. He said it needs a new motor and they cost 500. New big fan same kind replacement costs about 600.

Sooooo…i’m looking at Big Ass Fans. My farrier swears by them.

My two questions are:

I’m useless as to recommendations but I interpreted “Big Ass Fans” as “fans of big A$$es” and had a pretty good laugh. Thank you for that

the sensor is optional (about $150?) it is a passive infrared sensor and wide detection radius therefor dust should not be a problem

here should be the product specification sheet

thanks…i looked that over. Why i decided for the big one is that’s when the motor hp jumps a notch.
So, about the infrared sensor…i guess it does work at night? So, will the horses in the barn, moving not very much at all, do you think they will keep the fan going. Like maybe because of an ear twitch or a tail swish every now and then…?

I can’t speak to the Big A** fans but I can speak to and recommend Strongway fans built by Northern Tool.

My two - 42” sealed drum fans were going great guns. One for ten years, one for eight years - until my sweaty hands lost control of the 17 CuFt dump cart going down the aley ramp in the barn, knocked them BOTH over a week apart while they were running, and bent a fan blade on both of them.

I am still kicking myself in the Big A** over that one but my point is those fans were used from 6:30 AM to 1:30 AM almost every day during the southern Middle Tennessee humid summers and they never let me down until I killed them both​:exploding_head:

The money I was saving for something else went to two identical replacements - my local Northern Tool was gracious enough to give me 10% off both fans, which at least paid Tennessee’s sales tax…

Mine are on their own individual, industrial timers because two 42” fans will blow the circuit if they’re on the same timer.

Anyway, anything that lasts that long in my barn, where there’s a lot of dust, gets a 20-star review from me​:+1:

The direct drive is definitely a plus! The three 50" ones i have (of which two died w/in a week of eachother…talk about planned obsolescence!) are belt driven. I don’t mind the noise, but they are a lot less powerful/more clunky. I run them 24/7 all summer long. A timer sounds like a smart idea! i never thought about doing that! thanks

I had belt driven, 36” fans the first several years we lived here; they were from TSC. They were also on industrial timers and like yours, never lasted more than 2-3 years - four years if someone made a mistake and built it with a good motor, lol. We were always replacing belts.

The money we spent on those belt driven fans could have bought a few more direct drive fans that would have ended up saving money over the long haul - if only I hadn’t run into them​:woozy_face:

These 42” fans push a LOT more air than the 36” fans. Now that I am down to two horses, two of them are sufficient. Each horse has his own fan at night (my stalls are pipe panels). During the day I aim one on the hay and one fan on the run-in stall. The fans are pushing hot air but at least the blowing air keeps the flies from following the horses into the barn:)

So, about the infrared sensor…i guess it does work at night?

yes, the sensor looks for a heat signature differentiation, there “may be” an issue when the intended target (horse or human) is the same temperature as the background (walls/floors/bedding). Back in the early 1990s we had to switch to a sensor that looked for presence with microwave rather than infrared This was after I was brought in by an attorney to see why an automated door system entrapped a handicap person between two sets of doors, the heat of the day made everything between the sets of doors the same or near same temp therefor the system never “saw” the person.

(For about decade I did UL testing as an observer since I am not an engineer but had decades of field experience of just what can go wrong …the oddest issue was of a system where a motor at times would not reverse directions, found a frog stuck in the reversing switch… the engineers were baffled, I was just looking to see what was out of place)

Poor little frog. And weird about the woman. So, because she was moving slowly she didn’t get clear of the outside set before they closed on her, and then didn’t open back up because of the ambient heat her body temp?

yes, the sensor looks for a heat signature differentiation, there “may be” an issue when the intended target (horse or human) is the same temperature as the background (walls/floors/bedding).

So, if i aim the sensor from 10ft mounting toward the floor chances are the horses will trip it better than if it were aimed toward, say, the west wall which the sun bakes. Right?

I was a big fan of our first ass. He was really big. 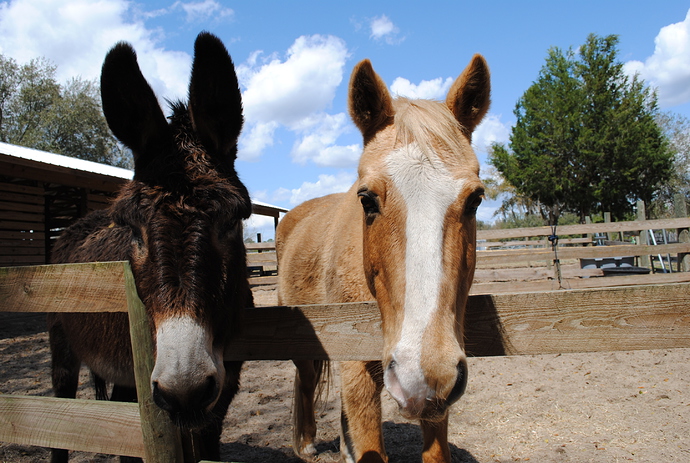 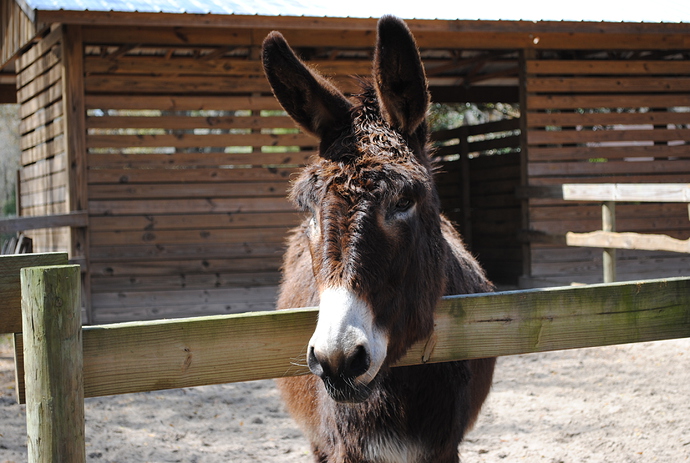 was he a mule-maker for you?

correct, in the installation manual is specific guidance on how to direct the sensor

Nope. Gelded young. He was a pet. A great pet. I still miss him.

He was famous, too. His video went viral. Yeah, I sucked at the violin and viola. I’m a bit better now. I made the video for grandma. I put as public so she didn’t have to use a password. Boy, was that a surprise when it made the rounds. And then made the rounds again. Sigh. Please, just focus on the donkey and not my playing, lol. My big ass had fans… 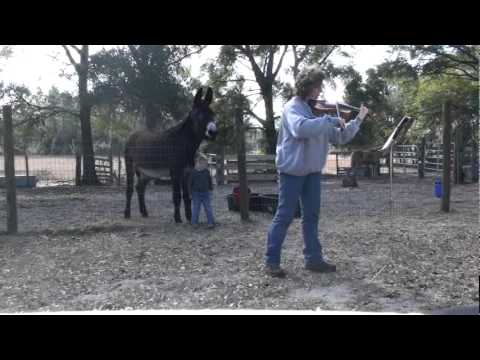 he mimics the vibrato!

Yes, in fact, I think he exceeds it. My vibrato was pretty dang weak back then.

That is so funny! Don’t worry about your playing; he totally upstages you.

Finally did it! I bought 5 ‘aireye’ Big Ass fans. My Christmas present to the horses!

They won’t be here for five or six weeks, but i don’t need them for six months anyway! I’m going to hire an electrician to put them in. Gonna have some more lights put in the barns too while i’m at it. Summer will be good here once again.