Some of you know about Dewey, my cat with kidney failure. He had to be put to sleep yesterday.

Last Wednesday night, he wasn’t feeling well. He kept going to the litter box and straining (not to pee but like he was constipated) and he threw up a few times. He was straining again on Thursday morning so I took him to the vet on Thursday. They did a few things for constipation and nausea. Those things improved but he still wasn’t feeling well.

I took him to the vet again on Saturday and they re-did his blood work and his levels were off the charts. The vet told me he didn’t have much time left (probably a few days). I took him home but he continued to decline. By Sunday morning, I knew I had to do something. I called the at-home euthanasia service but they didn’t have a doctor working on Sunday. I made an appointment for Monday morning but Sunday evening I took him to an emergency clinic to be put to sleep. He was doing bad (couldn’t really walk, howling, seemed pretty unresponsive and disoriented) and I didn’t think he could wait until Monday morning. I was concerned he might start having seizures or something else that would cause him more suffering.

My heart is shattered. I adore all my cats, but Dewey and I always had a special bond. He was a little feral when he showed up at my place. At first, I couldn’t touch him or get too close to him. I had to spend some time talking to him and hanging out as close as he would let me get and getting him to trust me. Once I could touch him and he came into the house, he became a total mama’s boy and he was usually by my side. He was so sweet and funny and quirky. He was my baby and the love of my life.

I’m also very upset about how things happened on Saturday. I got turned away from one clinic (after I called before I drove there and asked if I could bring him). Then I went to another clinic and had to wait forever. With all the waiting and driving, we were away from home for about 9 1/2 hours. He wasn’t critical on Saturday but I’m sure being away from home that long wasn’t good for him and I wonder if it made him crash and made the end come sooner. I hated having to take him somewhere to be put to sleep, but by then he was pretty out of it and he might not have really known what was going on.

I was holding him when he died so that was a good thing. I miss him so much. 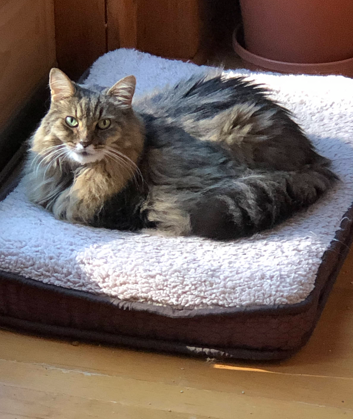 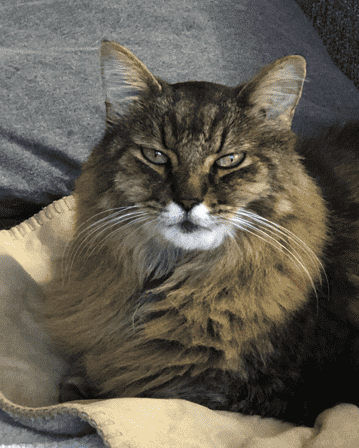 So sorry for your loss. He looks like a regal fellow.

Sad to hear this. Dewey was a beautiful boy and I’m sure he lived a great life with you.
RIP Dewey.

Godspeed, Dewey.
He was a very handsome boy.

Please don’t What If too much.
You did the best you could for him.

BTDT with my seniors, all seemed to succumb to kidney failure at 17.

Oh, I’m so sorry. I’m sorry he’s gone and that it happened on the weekend and you had to go the emergency vet.

Don’t feel guilty. You took wonderful care of him and did the best job possible.

I know how hard it is to lose the ones we had a special connection with and I wish I could say something to ease your grief.

What a pretty kitty. So sorry for your loss.

Thinking of you in your sorrow - special cats are just that, makes it even harder to say good-bye (and pretty much all are special).

What a gorgeous boy! I’m so sorry for your loss. I hope all your warm loving memories assuage your grief. Hugs to you. He was well and truly loved.

So handsome! You were lucky to have each other to love.

So handsome. I’m so sorry for your loss. I’m also sorry for the crappy treatment you received. You did your best and there was nothing else you could have done. (((hugs)))

Sorry you were treated so horribly during a very worrisome time.

I’m sorry for your loss… he was a very handsome boy.

I’m sorry for your loss. Dewey was a beautiful boy.

@ravenclaw, how are you doing?

((hugs)) for the family Dewey leaves behind ~

RIP ~ Mr. Handsome, Dewey ~ knowing you will always be loved and remembered ~

I’m sorry for this huge heartbreak ~ be kind to yourself, ravenclaw and know Dewey is watching over you ~

Thank you everyone for all your kindness.

One of my other cats (Nina) is sitting with me right now. I think she knows I’m sad.

Shiloh - How is Ollie?

Ollie - is hanging in. He will eat on his own but sometimes I get some really crusty looks. He sleeps a lot more but does like to snug with me at night and perch on the back of the sofa to watch TV or leer over my shoulder at snacks (like Cheetos) that he can’t have (even if he was well). Thank you for asking.

So terribly sorry for your loss. Sending hugs and calming prayers your way.

I’m glad you’re almost done for the summer. What a relief!

I’m glad Nina consoled you. Some kitties are really good with sensing our emotions and consoling us. That was my Thomas.

One day I was going through my mom’s things and started the loud, ugly crying… all the cats came and looked to see what the racket was but all but Thomas scattered. He came over and put his paw on my knee wanting to be be picked up.

He was my Dewey.

They broke the mold after some.

Sammy’s ok. He keeps losing a little weight each visit but he’s hanging in there at 7 lbs right now. I had to put him on pepcid so it must be growing some.

I’m just kissing his little chubby cheeks while I can.

I hope today is easier than yesterday. Hang in there, we’re all thinking of you.