I have a few PS of Swedens, a Schockemohle, and a Kavalkade Ivana. The Kavalkade is the cheapest, but also my favorite. My horse has prominent cheek bones, and the curved connection point keeps the noseband out of the way.

I am basically a trail rider, but I have a dressage saddle and need to get a new bridle, my favorite Stubben is 15+ years old and showing it’s wear. I liked the Stubben Freedom, but I also always like your opinions!

There are some interesting British possibilities beyond the Fairfax. I’ve recently been looking at ergonomic bridles in black for my mare, so I’ve spent way too much time looking at websites!

The Quantum bridle looks very cool. It incorporates some of the same ideas as the Stubben Freedom (the cheek pieces that sweep back away from the eyes). They are pricey, though, and don’t seem to have a U.S. distributor.

Jeffries has a Gentle bridle that is more conventional looking but seems to be addressing some of the same issues in terms of avoiding pressure on the sides of the head. Also pricey, also I have not seen a U.S. distributor.

EvoEquine is a smaller manufacturer based in Britain. It too does not have a U.S. distributor (hmm, I wonder if there’s a pattern here?), but they produce a wider range of bridles, most of which are ergonomic/anatomic, at a lower price point. Not cheap by any means but less than the Fairfax, Quantum, and Jeffries.

I’ve actually ordered a bridle from EvoEquine in the past few days, so I obviously haven’t received it yet. But I’m hoping that my optimism will be rewarded!

Good luck on your search! I constantly kept coming back to COTH as I searched to see what the collective wisdom was on various bridles. Priceless, if also time-consuming!

Metal rings on each side help distribute pressure better and more evenly. A single strap of leather does not have much give or ways to go.

Riding without a noseband is probably the most comfortable thing if a bridle and bit have to be worn, from the horse’s perspective. But not legal in many disciplines.

You will have to let us know what you think of the EvoEquine bridle @Posting_Trot! I had them on my list but ended up getting a Henry James instead.

I’ve been pining after these bridles, but they don’t ship to the US

https://www.horsemanshipsaddlery.uk/
I like how they can pass as a traditional bridle but still provide the horse comfort with the shaped crown and the throatlatch design.

i ordered a couple of bridles yesterday, one of them is this. Having Equiture make a custom megabling browband to replace the one that comes-with however. Since I don’t like to use a flash, this little puppy on this bridle is gonna come right off. 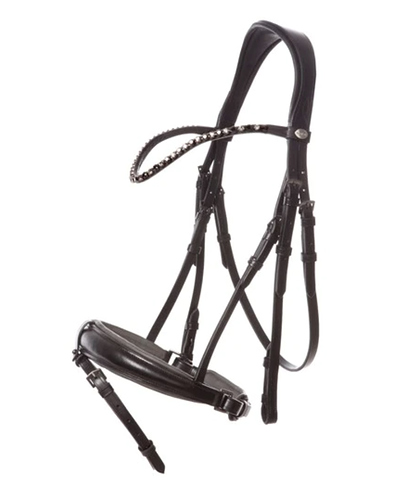 edit: damn! i just saw this bridle for 30$ less at another store

My horse really seems to like the Acavallo Amazzone. I like that the noseband isn’t quite so overwhelming on his face as some of the other brands (Thoroughbred here).

I wish someone at usef would get back to me on if it’s legal for usef/usdf shows though, it’s been at least a month since i emailed to ask and crickets. I switched back to a regular snaffle to go to our last show and definitely felt a difference in the contact

It has all the necessary prerequisites – crownpiece, throatlatch, browband, noseband attached to the crown piece, independent cheek straps for bit… The only thing I see that makes it a departure from a traditional bridle is that the cheekpiece strap to the noseband goes into a metal ring versus being stitched onto the leather of the noseband… There is nothing in the rulebook that says the leather cheek piece must affix to leather versus a ring. Grackle (figure 8) nosebands are a prime example.

How do you like the leather quality of the Acavallo bridles?

Agreed. I just looked at it and I would have no qualms about showing in one of those.

It’s not a metal ring, it has metal “prongs” that insert into the noseband itself to act as an attachment point. Further, the crown piece is not a continuous piece of leather, it has a kind of thin foam pad where the leather padding is cut away.

I just took the bridle off so pardon the dirt!

I had meant to find the TD to ask about it but a 7:30 ride time precluded that. 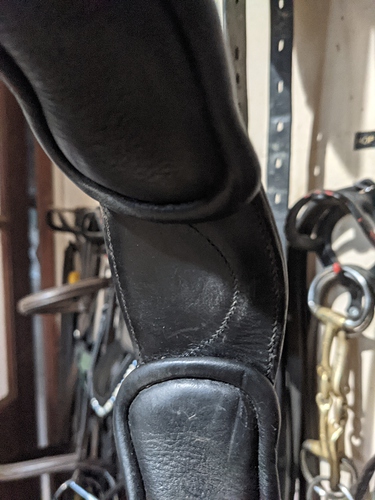 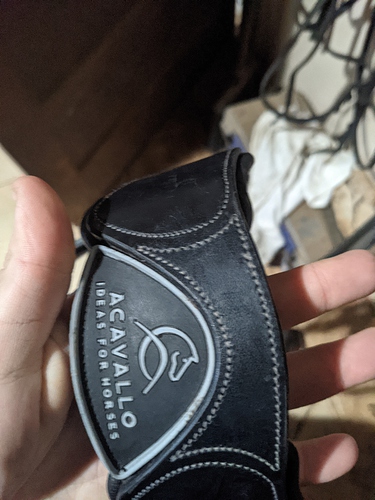 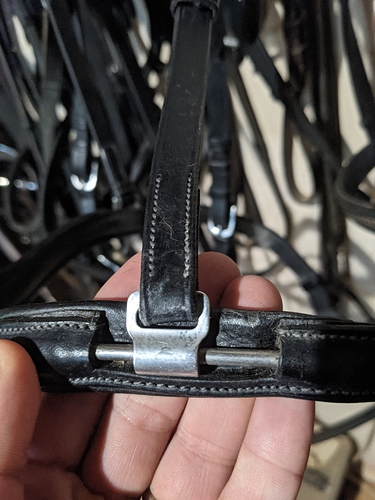 Thanks for the close up! That is a very clever set up. It is legal in the spirit of the rules but, as we know, sometimes the USEF is very particular and selective about what brands are permissible… They didn’t want to approve any sort of ergonomic bridle after Micklem, it took PS of Sweden forever to get approved.

The headstall is legal. A few lines from Stubben, PSoS, Antares, and Arion have that headstall.

About what you would expect for a $200 bridle. Not $h*t but not totally drool worthy

Yeah, it’s a lovely concept and my forever fussy in the contact Thoroughbred is definitely happier in it than his admittedly very regular and non-anatomic snaffle or the double and i have been very impressed for the price point. But that damn metal in the noseband wants me to get an official word on it.

Thanks for letting me know about the headstall! I had given up on googling all the randomly “approved bridles” to try and find something that matched, but you’re absolutely right, if the noseband ends up being an issue perhaps I’ll try one of those instead. Some of those are just way out of my budget!

But that damn metal in the noseband wants me to get an official word on it.

yes. that would be the issue.

“2. For Training, First and Second Level tests and FEI Pony tests, a plain snaffle bridle is required with a
regular cavesson, a dropped noseband, a flash noseband (a combination of a cavesson noseband and a
dropped noseband attachment) or a crossed noseband. Except for the FEI Pony tests, a crescent
noseband is also permitted at these levels. Except for the crescent noseband, buckles and a small disk of
sheepskin, which may be used in the intersection of the two leather straps of a crossed noseband, the
headstall and cavesson/noseband of the bridle must be made entirely of leather or leather-like material. A
padded cavesson/noseband and crownpiece are allowed. A browband is required, and except for the
parts that attach to the crownpiece or headstall, is not required to be made of leather or leather-like
material.”

A crescent has one strap over the front of the nose, but two pieces that buckle in back - one up where a normal noseband would be and one down where a drop would be. The straps are connected by a piece of metal. https://www.dressageextensions.com/german-crescent-caveson/p/X1-0854/?gclid=CjwKCAjw7rWKBhAtEiwAJ3CWLA0z1g8ZQ_aXWoXClHfY89mZ1H4BiAnX4mEUy50jbdGCeTK0g32_PBoCwEQQAvD_BwE

I have a tack room full of bridles but I can unequivocally say that both my fairly sensitive horses show dramatic difference in comfort and performance with the “right” bridle. Current competition horse really prefers the half circle nosebands (e.g. PS of Sweden High Jump), but the version with metal in it (to help it keep the shape) is illegal for regular dressage (but legal for eventing dressage) so he jumps in that one. However, he is also pretty happy with the Collegiate Comfitech version that doesn’t have metal in it and is legal for all forms of dressage. Note that this one is clearly preferred over the Micklem, a figure 8 noseband, multiple different versions of cavesson plus flash, and a plain cavesson. He’s not particularly fussed about the other parts of the bridle, but I think he marginally prefers narrower crown pieces.

My retired competition horse had huge ears and was very particular about anatomical headpieces with big cutouts for her ears. She was a bit more flexible about nosebands but hated flashes (or anything around her mouth). It’s hard to find a a nice snaffle bridle with just a plain cavesson with a crown piece she liked, but PS of Sweden had the Paladin that really was good for her.

I just bought a bridle from EvoEquine that is a knock-off of the PS of Sweden High Jump. I’d been looking for an anatomic bridle for my mare to replace the Micklem that she’s been wearing for a couple of years.

I found, when I ordered several other bridles labeled ergonomic or anatomic that they didn’t provide much adjustability. So, for example, I ordered one of the Kieffer anatomical bridles, and if I adjusted the cheek pieces so that the nose piece actually crossed her face at the right spot, the nose band piece just didn’t fit properly (the straps seemed too small even in the Ex-Full size). I also wasn’t super impressed with the leather.

The bridle I just got is very adjustable and you can send the company an extensive list of measurements and they’ll swap in pieces of different sizes, if necessary. The leather is beautiful–very thick and supple.

Definitely worth checking out if you’re looking for a bridle.