Good bye good (and sometimes evil) kitty. You marched into our lives eleven years ago, on the night that a friend’s mother died literally appearing out of the darkness and then refusing to go away. Thank you to those friends for bringing him into my life. Barn cat. House cat. Hunter extraordinaire. Photographic subject. Paperweight. Zoom meeting attendee. Neighborhood greeter. You touched many lives in those various roles and helped me to meet many neighbors since you had a tendency to run up to people to greet them. The world is an emptier place without my buddy who followed me around the house and the garden and sat with me.

For the curious, he was hit by a car with enough force that his pelvis was displaced forward and probably severed nerves. Even with a compromised hind end and with an opiate and a benzodiazepine flowing through his veins the vet still had to trim his nails in order to examine him. For all the negative talk about the vet profession, they got me in immediately, treated us both with compassion, and if anything undercharged me. Yes, I know there was a risk in letting him outside but he was something of a free spirit and I only let him out when I was home and never at night. My street is narrow enough that you have to pay attention to drive down it when there are cars parked so, in theory, people shouldn’t be going too fast. I have no idea how fast the driver was going but the screech of breaks and the thud were both pretty loud.

Hug your kitties and take lots of photos because you never know. 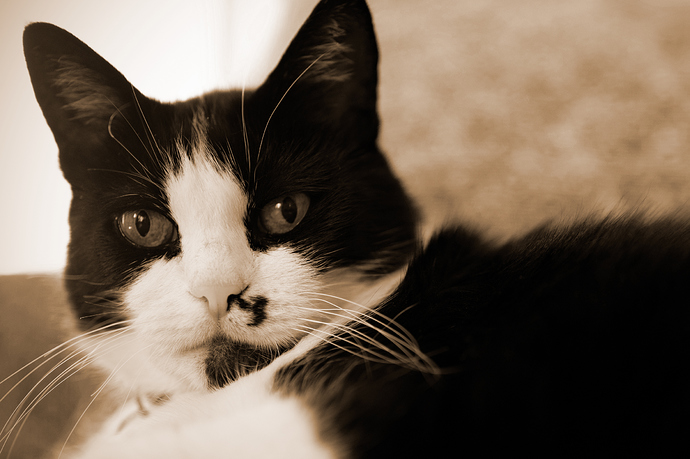 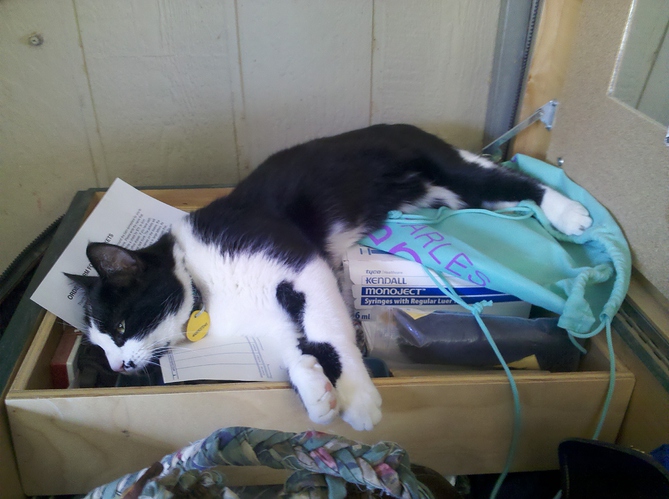 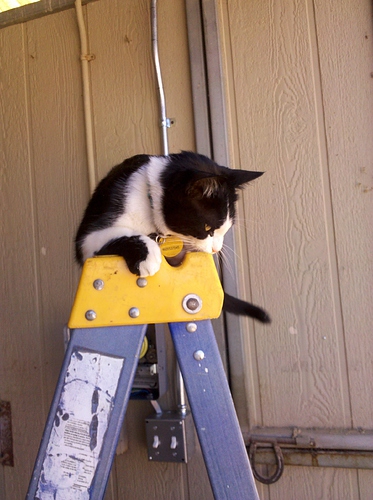 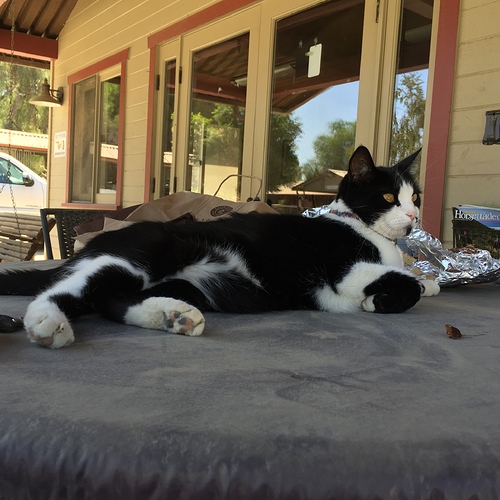 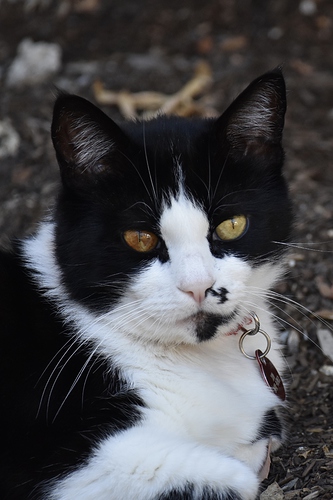 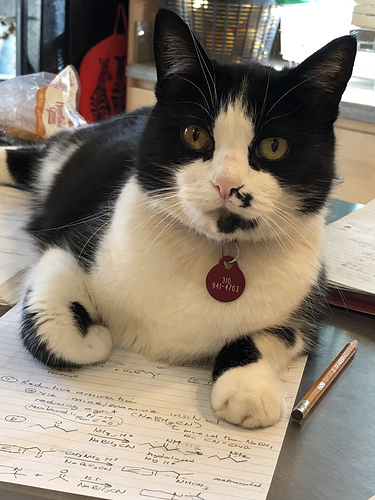 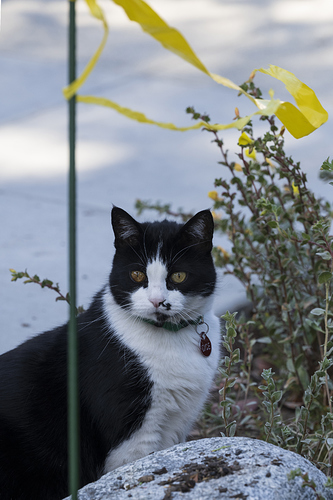 What a handsome guy. So sorry for your loss.

Sorry for your loss. He looks like a character. I love the little sideways squiggle from his nose.

What a confident little devil. I am so sorry for your loss, and share it. We lost Best Barn Cat Ever just a few weeks ago. He had reached that old cat stage where he’d meow until someone would call him and guide him to the tack room. We found his body, fully intact. A coyote probably dropped him when distracted by a tasty hen. It’s just impossible to keep a barn cat inside. R.I.P. Dice, you are in good company.

ETA: Love the pics, especially of him checking chem homework.

Sorry for your loss. Dice lived a full life. He was a beautiful boy.

So long handsome Dice. Sounds like you were a wonderful kitty.

Sorry for the loss of this loyal friend Peggy.

I’m so sorry. I know what it’s like to have that cat you can’t keep inside, no matter how much you want to. Sounds like Dice lived life on his terms. You were very lucky to have each other.

What a lovely tribute you wrote to Dice. I’m so sorry that he’s gone.

I have had a few black and white kitties and they’re awesome. That first picture of him is beautiful and I think you also posted a picture of him on the taco truck a while back. You can see in all the pictures that he was happy and loved.

Thank you everyone. He was a truly awesome cat. One of my neighbors came by today with a tuxedo cat ornament and a bouquet with cat ear glasses. Her grandkids loved playing with him.

@ravenclaw Yes, I posted a photo of him on the taco truck. He loved that thing. The first photo was one I took the weekend before he died. I had to do a portrait for a photo class I’m taking and mercifully they allowed us to use pet portraits. It had been awhile since we’d done a photo session and I am grateful for the assignment. Now I have to figure out which photos to have printed and hung. I also plan to do a photo book.

Oh Peggy, having lost my dear kitty Daisy just yesterday to cancer, I feel such empathy for you. Dice looked like one funny, independent character, and what a lucky boy he was when you took him in.
I wish you healing in the days to come.

I’m so sorry for your loss. What a handsome boy - that face. Those eyes. It sounds like he had a great and happy life. So sorry he had to leave it in such a way. (((Hugs to you)))

What a gorgeous kitty he was!

I’m so sorry for your loss. They sure do leave an awfully big hole in our hearts and home.

I’m so sorry; he was a very handsome devil. Your description of him is so wonderful. I have tears reading about your loss. God speed, Dice. You were loved.

What a pretty boy. So sorry .

RIP ~ Beloved DICE ~ knowing you will always be loved and remembered ~

((Hugs)) laced with comfort and strength during your heartbreaking grieving ~

“How lucky I am to have something that makes saying ‘Good-Bye’ so hard. A.A. Milne ~ Winnie The Pooh

My heart goes out to you and the lovely Diceman. As a fellow tuxedo (multiple) cat lover. And of course just a lover of really cool felines who knows how a cat can change and brighten your days. Wishing you peace and much love. I’m so very sorry for your loss.

Oh I am so sorry to hear about Dice. We get to know each others horses and pets here on this forum, and Dice’s rakish charm absolutely radiated through his photos. He lived life by his own rules, and he deemed you worthy to be his human. RIP Dice. hugs to you.

Quite the looker. Thank you for sharing the memories. Some cats are just extra special.

Again, thank you everyone for your kind words. It means so much. I miss him so much, even a week later.

Although there will only be one Dice, my local shelter posted a photo that called to me. But that is a story for its own thread.